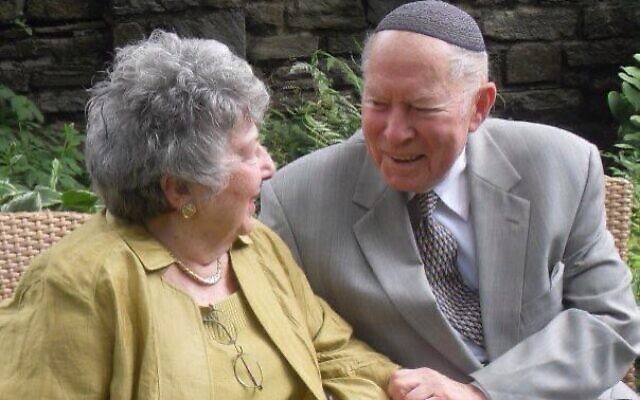 Chantze and Donald Butler (Photo courtesy of the Butler family)

A maternal icon in Pittsburgh’s Orthodox Jewish community has died.

Chantze Butler, a mother of four who famously helped establish Hillel Academy of Pittsburgh and Kollel Jewish Learning Center while seated at her dining room table, died last month at the age of 99. Services were held on April 26 at Beit Shemesh in Israel.

“My mother left a lasting, loving legacy for the Jewish community of Pittsburgh,” said her son, David Butler, who grew up in Pittsburgh but now lives in Maryland. “She was among the last members of a generation who were instrumental in building and sustaining Jewish life and institutions in the city, and who helped cultivate the warm and embracing Pittsburgh Jewish community we are all so proud of. We will miss her. But her legacy will live on.” 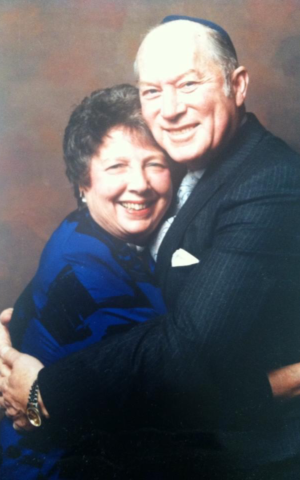 Chantze and Donald Butler (Photo courtesy of the Butler family)
Born Feb. 22, 1923, in Boston to parents from what today is Israel, Butler moved to Pittsburgh around 1946, according to Magisterial District Judge Danny Butler, her nephew. She lived her Pittsburgh life on Bartlett Street, in what became an ancestral home that now houses the family’s fifth generation. Even in her later years, Butler would sit in the big house and play her many grandchildren online in Scrabble, family members recalled.

Butler’s late husband, Donald, who predeceased her by almost a decade, ran several businesses with his brother Abraham including a publishing company that printed “This Week In Pittsburgh,” a magazine frequently found in area hotels, and the Pinsker’s storefront on Murray Avenue in Squirrel Hill, which they owned for several years from the 1960s to the 1980s, Danny Butler said.

She taught extensively, and spoke Hebrew fluently, friends of the family said.

“She was the purest kind of Jewish educator — any kid, any class, any time,” said Nina Butler, her niece.

“There was something about being in her presence that put you at ease,” Nina Butler added. “It wasn’t a heavy-handed thing at all. It was about being a loving parent.”

Rabbi Daniel Yolkut, whose Congregation Poale Zedeck Butler attended, remembered Butler’s warmth. He recalled hosting Torah classes in her home.
“The table was always set. There was always that kind of hospitality — from another era, almost,” Yolkut said. “She was probably the most gracious person I’ve ever met — matriarchal, warm to everyone she met.”

Yolkut also stressed that, outside of the familiar Pittsburgh settings, Butler became something of “a pioneer in hosting Jewish families.” If an Orthodox boy was coming to Pennsylvania to woo a Pittsburgh girl, he would know that the Butlers’ house was the place to visit for a comfortable and religious stay, Yolkut said.

“Her own children referred to [guests] as their own brothers and sisters,” Nina Butler added.

Rabbi Raphael Butler, Butler’s son, said the family house “was always an open house of guests, of responding to those in need.”

“My mother was able to get into the hearts and minds of everybody with her compassion, her love,” added Raphael Butler, who lives in New York. “[My parents’] whole lives were ‘What could I do for others?’”

To that end, several family members pointed out that Donald and Chantze Butler helped start the Hillel Academy of Pittsburgh before they even had children who could attend it.

“She was truly a remarkable person,” Danny Butler said, “And her smile endured until the end.” PJC