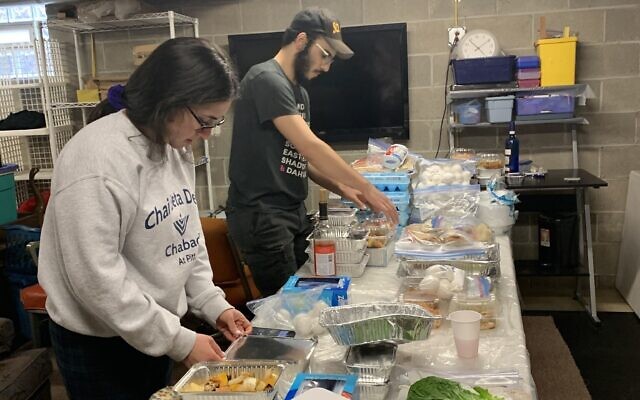 Despite COVID-19 forcing synagogues and other religious institutions to close their doors, Chabad House on Campus has continued to engage students living on or near local college campuses.

“Obviously this took everyone by surprise,” explained Rabbi Shmuli Rothstein, who is the program co-director of Chabad at Pitt along with his wife, Chasi Rothstein. “At first, everyone got very excited about the Zoom stuff. We started offering classes online, some classes attracted more kids than others, but everyone was able to find their place.”

It was only after Rothstein began getting used to the “new normal” of the virtual landscape that more interesting things began to happen, according to the rabbi.

“We started to get phone calls from parents who said that, for whatever reason, their son or daughter was stuck on campus,” he said.

Because of that need, the Rothsteins started “Chabad on the go.”

“The first Shabbat was great,” Rothstein said. “We prepared 20 or 30 Shabbat-to-go packages.”

Chasi Rothstein created a schedule that allowed for social distancing as students arrived to pick up their food. The Chabad co-directors were taken by surprise, however, when they posted a sign-up sheet for Passover kits containing grape juice or wine, matzah, a seder plate and food.

“We had about 50 people sign up and we told everyone we were closing the sheet,” Rothstein said. “Then my phone began to ring,” with both students and parents of students who hadn’t signed up, trying to get on the list.

“In the last day, the list almost doubled in a beautiful college style,” the rabbi continued. “And then the day of, even more people came. We ended up with a line down the block.” 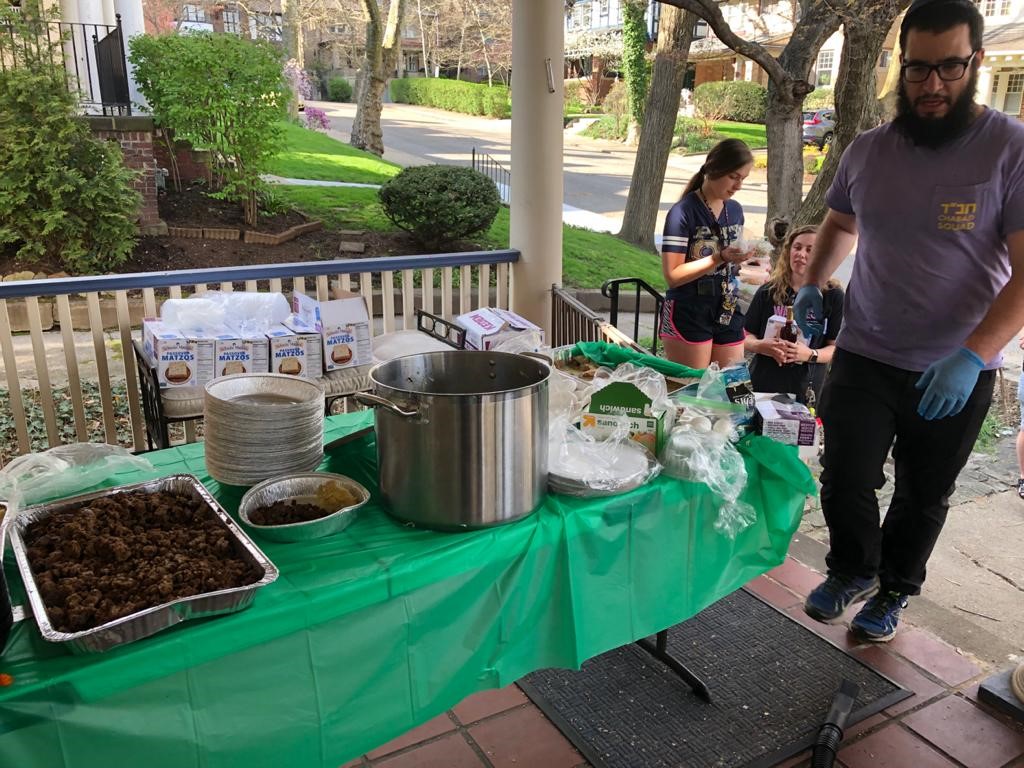 The Rothsteins originally thought that the number of students they would interact with during the COVID-19 crisis would be small, however, they soon found out “there are a lot of people still on campus,” the rabbi said.

Sara Weinstein, who is the co-director of Chabad House on Campus with her husband, Rabbi Shmuel Weinstein, explained that under normal circumstances, Chabad-led programs are often students’ first interactions with structured Judaism. The pair now has to work to find ways to teach and take care of students while social distancing.

“There’s a Russian student from Chatham, he lives in an apartment and couldn’t go back home,” Weinstein said. “He would normally be here for Shabbos dinner every Friday night but since we had to stop, we’ve been sending him food.”

She said her husband went through the seder with the student over Google Hangout, including explaining what a Haggadah was. The student had never had a seder, as his family wasn’t religious. “He said, ‘I’ve learned more about Judaism in Pittsburgh’ because he’s been coming over Shabbos and participating in things,” Weinstein said.

Weinstein pointed out that Chabad typically “wants to be able to gather people together,” so while she was happy to help the student celebrate Passover alone, “it was a little painful for us.”

Ethan Einhorn is a senior speech pathology student close to the Weinsteins. He decided to stay in Pittsburgh after visiting New Orleans before he was aware of the impact of the virus. Both he and his roommate experienced mild symptoms of COVID-19 and decided to self-quarantine rather than go home.

He celebrated both Passover and Shabbat utilizing kits provided by Chabad. He views the Weinsteins as a second family when he is in Pittsburgh.

“I’m really good friends with the whole family. I reached out to them right before Pesach and drove by in my car and just sat and chatted with them,” Einhorn said. 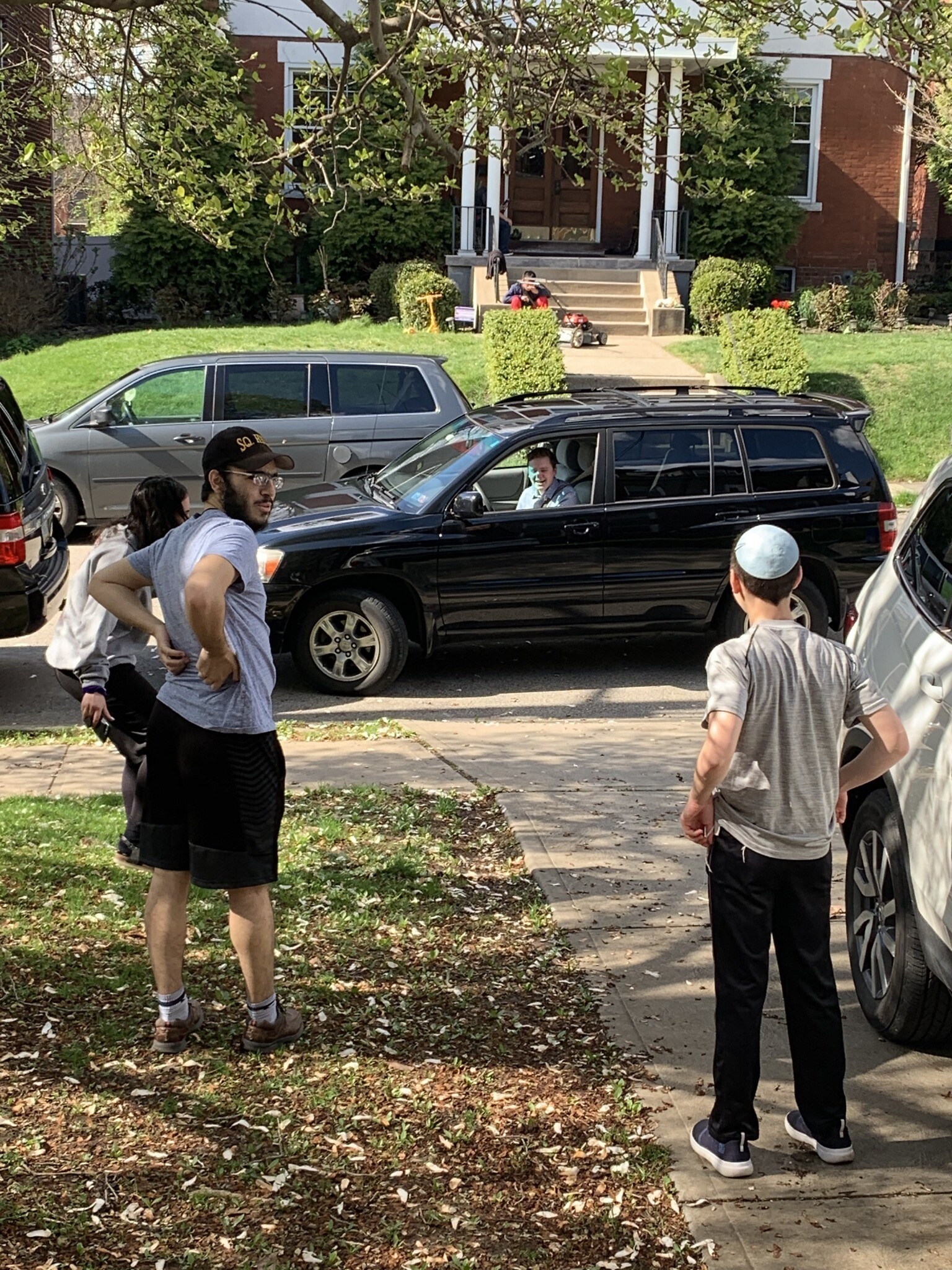 “My parents are living overseas right now. I’ve been on my own for about a year,” he explained. He said that even before the current situation, “Chabad looked out for people, making sure that we were doing well. That mission continues now.”

Franklin said he feels particularly close to Chabad and its families, likening his relationship to Pitt’s Rothstein as similar to “a brother. If there is anyone in Pittsburgh I trust, it’s Shmuli.”

Forcing students to stay away has been difficult, Rothstein said. “That has been interesting, to say ‘no’ to people. When they’re like, rabbi, ‘We’re here to pick up our food. Want to rap?’ The answer is ‘no.’ No one comes in the house. Interactions take place over our porch. It’s very awkward, especially with people you’ve spent four years with and are super close to. It’s very sad, actually.”

Weinstein and her husband have been involved with the college community for more than 30 years. She said that during this difficult time, Chabad can “try to be there for strength and comfort” so people know they are not alone. “And to try and have a Jewish perspective, which always includes hope and positivity because we know there’s a reason all of this happened, and that God has a plan.” PJC

David Rullo can be reached at drullo@pittsburghjewishchronicle.org.
*Franklin asked that his last name not be used in this story