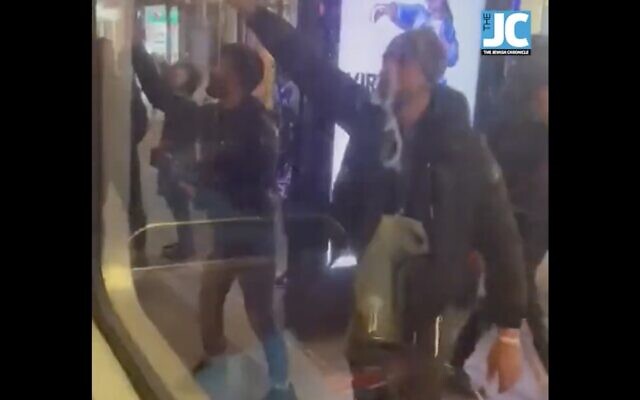 A video posted Dec. 1 shows young men harassing Jews on a Chabad bus on a Londaon street. (Screenshot via the Jewish Chronicle)

(JTA) — The Board of Deputies of British Jews, the main body representing the interests of Jews in the UK, has accused the BBC of falsely alleging that victims of a recent antisemitic incident in London had provoked their attackers with an anti-Muslim slur.

The Board’s president, Marie van der Zyl, published an op-ed Thursday in the Jewish Chronicle of London saying the BBC had made a “colossal error” in its coverage of the Nov. 29 incident. The public broadcaster had previously reported that several young men caught on video harassing a Chabad-affiliated bus of Jews publicly celebrating Hanukkah were reacting to an anti-Muslim slur from one of the Jews on the bus; the Board’s own analysis of video from the scene determined that none of the Jews on the bus had said anything Islamophobic.

“The supposed slur, which the BBC insists is there, is nothing but fiction,” van der Zyl wrote in the Jewish Chronicle. “This raises serious questions about deep-seated biases within the BBC towards Israelis, and towards Jews in general.”

The Board has criticized the BBC occasionally in the past over its coverage of Israel, but van der Zyl’s op-ed marked its harshest critique yet of the broadcaster. It followed a Dec. 14 protest outside the BBC headquarters organized by an antisemitism watchdog group, at which attendees held signs reading, “BBC News: Stop Blaming Jews!”

In the original video, several men can be seen pounding on the windows of the bus with their hands and shoes while shouting “Free Palestine,” spitting on the bus and flipping their middle fingers at the passengers as the bus drives away. At least one of the men performs what appears to be a Nazi salute.

The BBC’s claims about an anti-Muslim slur are false, van der Zyl wrote, and are probably based on a mistranslation of a sentence uttered in Hebrew meaning “call someone, it’s urgent,” according to the Board’s report.

“That misreporting is a colossal error on the part of the BBC. It has added insult to injury in accusing victims of antisemitism of being guilty of bigotry themselves,” van der Zyl wrote.

“But what takes this from an egregious failure to something far more sinister is the BBC’s behaviour when confronted with its mistake. Instead of admitting it was wrong, it has doubled and tripled down on insisting that a Hebrew cry for help must be an anti-Muslim slur, despite the concerted outcry from our community,” she added.

A spokesperson for the BBC told the Jewish Telegraphic Agency via email: “There was a brief reference to a slur, captured in a video recording, that appeared to come from the bus. We consulted a number of Hebrew speakers in determining that the slur was spoken in English. The brief reference to this was included so the fullest account of the incident was reported.”

The BBC spokesperson did not provide any further details on the nature of the alleged anti-Muslim slur.

The BBC’s Director General, Tim Davie, is scheduled to meet with representatives from the Board next month to discuss its coverage of the incident. PJC