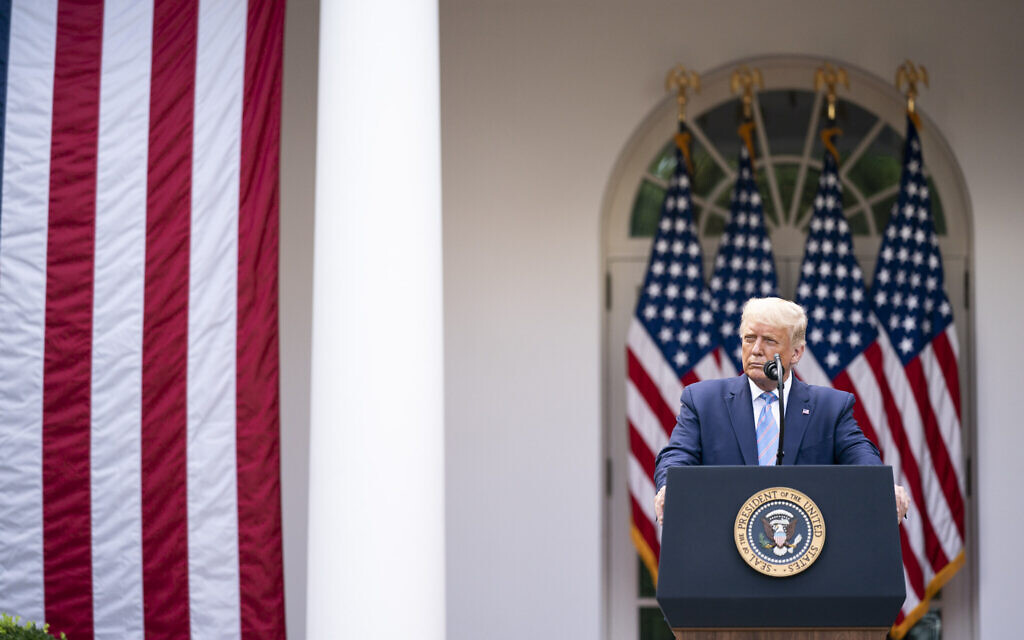 He did it again. When presented at the first presidential debate of 2020 with another opportunity to make a straightforward condemnation of white supremacists, he refused. Or at least that’s what many headlines screamed the next morning after the train wreck of a debate that was held in Cleveland. The responses from liberal Jewish groups and most of the chattering classes were angry. According to them, Trump had dog-whistled to extremists and made it clear that he was on the side of the neo-Nazis, the Ku Klux Klan and the Proud Boys, an offshoot of the alt-right that was recently seen marching in Portland, Oregon.

As with so much of what this president has said, including his much-criticized comments about the August 2017 neo-Nazi rally in Charlottesville, Virginia, his comments were imprecise, and not uttered in the matter that politicians traditionally use and which they should employ.

It’s also true that like so much of the coverage of Trump’s statements, the summaries of the exchange are inaccurate and misleading.

Trump didn’t refuse to condemn white supremacists. But he didn’t state that position, which has been repeated many times during his presidency and put into policy, in the sort of normative declarative statement that, in theory, would have ended the discussion. That’s why no matter how biased so much of the coverage of this event has been, Trump bears the responsibility for what followed.

Even if we acknowledge that fact, the latest edition of these tit-for-tat battles between Trump and the press about white supremacism didn’t do a thing to give us any pertinent information about the nature of the real extremist danger. Nor did it help a Jewish community that is understandably sensitive about anything to do with possible threats to its security to better understand what it should also be worried about.

The exchange with moderator Chris Wallace with interjections from Joe Biden went as follows:

Wallace: “Are you willing tonight to condemn white supremacists and militia groups, and to say that they need to stand down and not add to the violence at a number of these cities, as we saw in Kenosha and as we’ve seen in Portland?”
Trump: “Sure, I’m willing to do that, but I would say that almost everything I see is from the left-wing, not from the right-wing. I’m willing to do anything. I want to see peace.”
Wallace: “Well, then, do it, sir.”
Biden: “Say it. Do it. Say it.”
Trump: “You want to call them, what do you want to call them? Give me a name. Go ahead, who would you like me to condemn?”
Wallace: “White supremacists.”
Biden: “Proud Boys.”
Trump: “Proud Boys, stand back and stand by. But I’ll tell you what, somebody’s got to do something about Antifa and the left because this is not a right-wing problem.”

Parsing out what was said here isn’t hard. Contrary to the headlines, Trump didn’t refuse to condemn these groups. Although he spoke colloquially, saying, “Sure. I’m willing to do that,” was, in fact, a statement of assent.

But Trump didn’t rephrase it as Wallace, with Biden egging on the moderator, demanded. Trump always refuses to do as bidden when placed in such situations, no matter how easy or obvious it would be to do so to simply say, “Yes, I condemn them.” And telling the Proud Boys to “stand back” was, at least in Trump’s mind, also assenting to Wallace’s question. Unfortunately, adding the rhetorical flourish of “stand by” could be interpreted as diminishing the significance of the first phrase and may well have encouraged the group.

It’s easy to say Trump should have given Wallace what he wanted. But part of the problem here is that Trump knows that he has issued many declarative statements condemning white supremacy throughout his presidency, and it never satisfies those who are eager to pin the label of “extremist” on him. This impels him to petulant defiance that is foolish but not racist.

Trump’s refusal to learn to speak like a politician and issue careful, modulated statements, inevitably invites opponents to both cherry-pick words to suit their preferred interpretation and cause the speaker to be mislabeled and be condemned.

As with the Charlottesville statement, it’s the spin of Trump’s opponents that will dominate the narrative about the debate. An objective look at that transcript shows that the “very fine people” line was about those who objected to the removal of statues, not neo-Nazis. But many will still remember the debate as the time when Trump didn’t condemn racists.

The notion that white supremacists or the Proud Boys, a group that the ADL says numbers no more than several hundred, are the ones who created the urban crisis that has afflicted the United States in the last four months of violence and riots is not so much wrong as it is gaslighting. Sightings of them at the hundreds of riots that have taken place since the death of George Floyd have been rare.

It’s also true that while Biden condemned violence, like Trump, when it came to the Proud Boys, he chose not to condemn Antifa and its fellow travelers, as well as the people who have helped fund and foment riots, but somehow that was largely ignored.

Wallace also ignorantly mischaracterized the “white fragility” critical race theory training sessions that have proliferated in both government and industry as unobjectionable “sensitivity training,” and which Trump has tried to ban. They are driven by a toxic racist and radical theory that is further dividing the nation and fueling violence, rather than quelling it.

Nor did he ask Biden about his refusal or that of his campaign to distance himself from other extremists.

For all of his pose of civility and normality, Biden wasn’t asked why he compared Trump to Nazi propaganda minister Joseph Goebbels or why a Jewish Democratic group has published an ad comparing the administration to the Third Reich, egregious and inappropriate Holocaust references that should have been vigorously condemned by the organized Jewish community, but which it has largely winked at because of the political leanings of its leaders.

Wallace didn’t ask Biden why he and running mate Sen. Kamala Harris met with an anti-Semitic supporter of hatemonger Louis Farrakhan whose son had been shot by police, about whom his running mate said she was “proud.”

Biden also wasn’t asked about his campaign’s apology for denouncing the anti-Semitism of former Women’s March leader Linda Sarsour who was granted a speaking slot at the Democratic National Convention.

None of that absolves Trump from his failure to clearly state his position on right-wing extremists or for statements that he has made that are worthy of criticism. But the fact that what the president said was mischaracterized as support for white supremacists, while Biden gets a pass for his equivocations and refusal to explicitly condemn left-wing extremists who have been the ones burning American cities in recent months, is exactly what convinces Trump that he shouldn’t bother conforming to the demands of his interrogators.

The real tragedy here is that at a time when conversations about race and violence have never been more important, a debate that might have shed light on them did just the opposite. Partisans will seek to apportion blame for this depending on their political sympathies. However, the result is that the Trump-Biden brawl obfuscated the public discussion of extremist violence instead of clarifying it. PJC