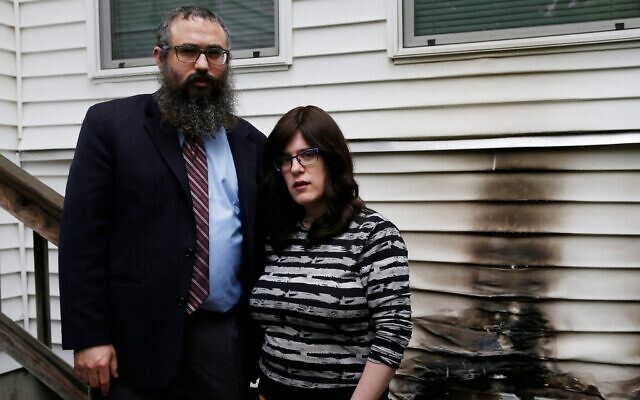 Rabbi Mendy Krinsky and his wife, Chanie, of the Chabad Jewish Center in Needham, Massachusetts, pose beside the spot where someone tried to set their Chabad house on fire in May 2019. (Jessica Rinaldi/The Boston Globe via Getty Images)

(JTA) — A series of arson attacks on Jewish institutions in Massachusetts in 2019 was likely perpetrated by a man who once wrote, “We must kill all Jews.”

But while the man was under investigation for domestic terrorism at the time of the attacks and police collected evidence that could tie him to the arsons almost immediately, he was not identified as a suspect until months later. By then, he was in a coma from which he never recovered.

Federal prosecutors revealed these details Wednesday with the announcement of an indictment of the suspected arsonist’s brother, who stands accused of obstructing the investigation by taking evidence of his brother’s antisemitic beliefs to Sweden, where he was living.

Alexander Giannakakis was arrested Wednesday near Stockholm by Swedish law enforcement and faces extradition to the United States. He had worked as a security guard for the U.S. Embassy in Sweden.

The FBI believes that Giannakakis’ brother was the arsonist behind three fires at two Chabad Jewish centers and a fourth case of arson targeting a Jewish-affiliated business in May 2019. The name of the suspected arsonist is not being released because he is dead.

The rabbi of one of the Chabad centers said he is grateful for law enforcement and thanked God for having been unharmed by the arson attack.

“We have looked at the incident as an impetus to grow because we believe that the best way to combat antisemitism is to do even more, to spread more light in the world, and more love in the world,” Rabbi Mendy Krinsky of the Chabad Jewish Center in Needham, Massachusetts, told the Jewish Telegraphic Agency. “That’s the best way. A little light dispels a lot of darkness.”

Prosecutors are characterizing the arson attacks as antisemitic acts of domestic terrorism. According to the indictment, Giannakakis, 35, lied to investigators and concealed evidence that could tie his brother to the crime, including a T-shirt emblazoned with a swastika, a notebook with a swastika drawn inside and a bottle of cyanide.

The suspected arsonist had written antisemitic screeds, scribbling Nazi slogans and the statements: “A world without Jews, is a world without scum. Something we should aim for,” and “We must kill, we must kill all Jews. That is simply essential.”

For Robert Trestan, the New England regional director of the Anti-Defamation League, the revelations about the likely motivation behind the attacks validate fears that Jews have about rising antisemitism in the United States.

“The indictment is yet again another reminder that antisemitism is more than a concept,” Trestan, told JTA. “It motivates people to commit acts of violence that are life-threatening to Jews around the country. If they are taking the threat posed by antisemitism extremely seriously then so should we, by prioritizing security, raising awareness of the threat that antisemitism poses, and being unrelenting in combating all forms of antisemitism.”

At the time of the arsons, the brother was under investigation by the FBI’s Joint Terrorism Task Force as part of a probe into a group suspected of “planning criminal activity in support of their racially motivated, violent extremist ideology,” the indictment said.

But the FBI and local police didn’t connect the man to the arsons until much later, apparently because state law enforcement officials did not finish processing fingerprints found at the scene of one of the arsons for nine months.

The first fire took place at the Chabad Center for Jewish life in Arlington, Massachusetts, on May 11, 2019. Five days later, on May 16, another fire started there, followed by a blaze at the Chabad Jewish Center in Needham.

Local police and the FBI launched an investigation, and the fires attracted widespread news coverage. For months, the investigation yielded very few clues, with no witnesses, fingerprints or video surveillance footage.

But unbeknown to investigators, law enforcement already had the key to the case in an evidence locker.

On May 26, there had been another arson, this time at a business. An eyewitness confronted someone suspicious who then fled from the scene while discarding a can of acetone, which is highly flammable. Police took the acetone can into evidence and submitted it for fingerprint analysis. No one in law enforcement connected this fourth arson to the previous three, according to the indictment.

It took until February 2020, some nine months later, for state police to process the fingerprints and identify who left them. Once that person was identified and the FBI realized he was a target of a separate domestic terrorism investigation into a hate group suspected of planning terrorist attacks, he became the prime suspect in three Chabad arsons.

But by then, the suspect was in a coma. He had been hospitalized in November 2019 for reasons that the indictment does not specify. He died in September 2020.

Investigators questioned Giannakakis and later learned that he had lied to them and hidden items belonging to his brother that showed he harbored a hatred of Jews, according to the indictment. The most serious charge Giannakakis faces carries a sentence of up to 20 years.

“The investigators followed all leads in this case, literally following the case around the world,” Arlington Police Chief Julie Flaherty said in a statement. “These crimes shook our community to its core, and it is my sincere hope that the international teamwork of American and Swedish authorities that has solved this series of hate crimes will provide some measure of solace to the victims. PJC
Penny Schwartz contributed reporting.