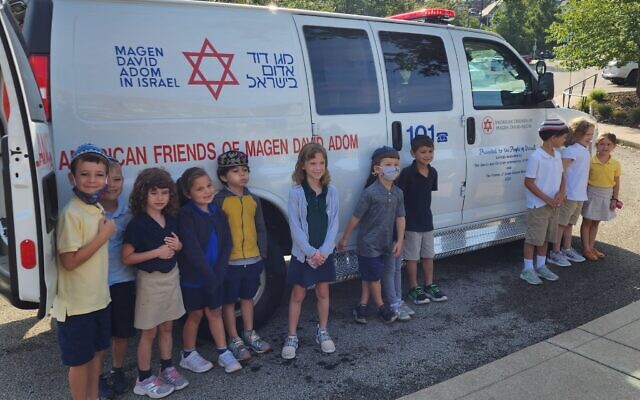 An ambulance that will eventually make its way to Israel was dedicated at Community Day School. Photo by Adam Reinherz

After seven years of work, Jeff and Arlene Berg may finally get a chance to rest. The Wilkins Township Evangelicals raised nearly $100,000 toward buying an ambulance for Israel.

Having secured commitments from approximately 40 donors, and with the medical vehicle ready for shipment east, the Bergs joined representatives of American Friends of Magen DavidAdom and Friends of Israel Gospel Ministry at Community Day School to celebrate.

The Sept. 12 gathering, the Bergs noted, was preceded by a similar ceremony a day earlier at their church, Crossroads Ministries in Finleyville, Pennsylvania.

Wendy Strip, a development executive for the Midwest Region of AFMDA, attended both events and praised the Bergs for their ability to bridge different faith communities.

“It’s not often that an ambulance is dedicated by the Jewish and Christian communities combined,” Strip said. “It’s wonderful to see these communities come together and beautifully represent the ideals of Magen David Adom.”

Originating in 1930, Magen David Adom enables individuals of “all backgrounds to work together and care for people all over the country regardless of their backgrounds,” Strip added. 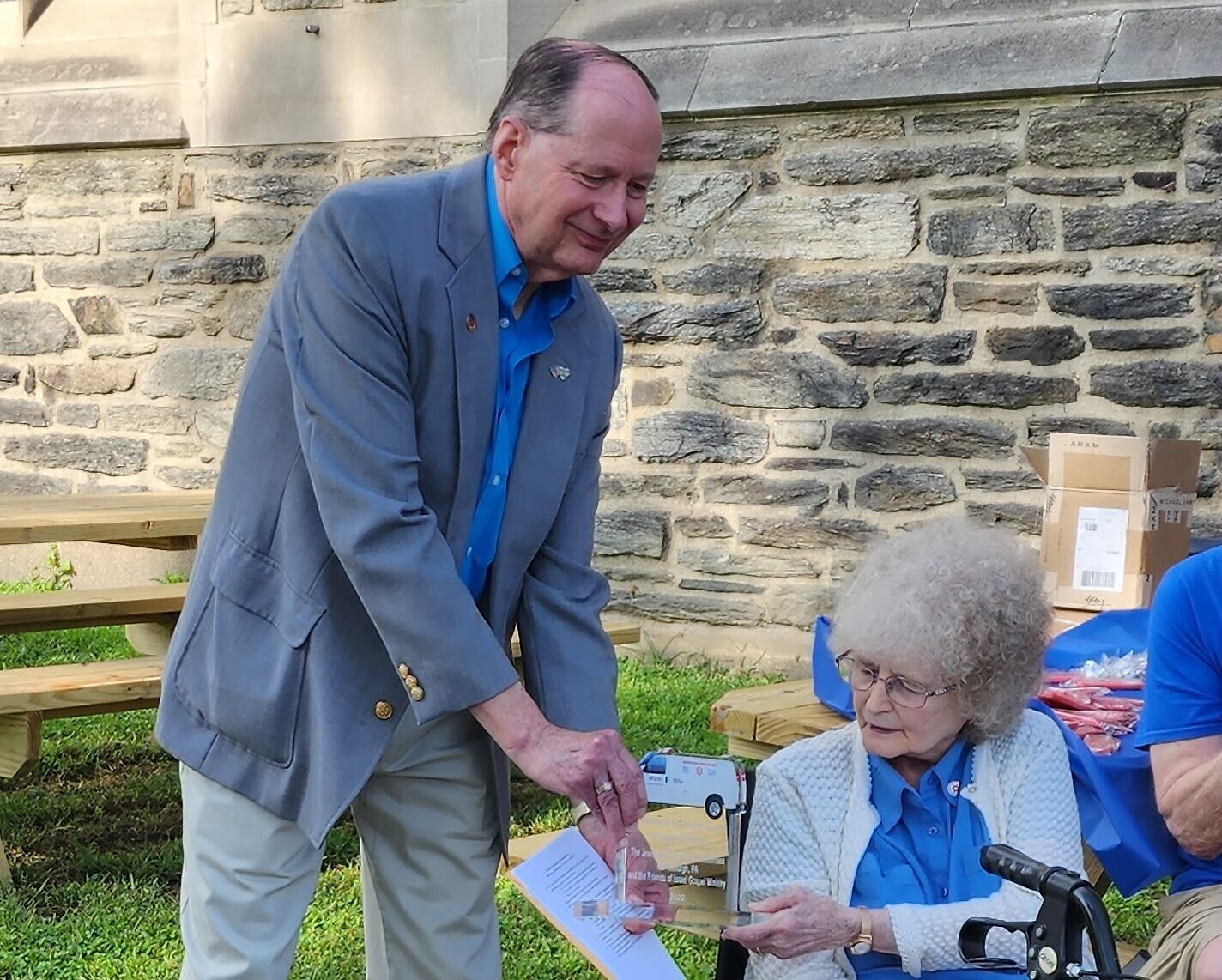 Jeff and Arlene Berg accept an award during the Sept. 12 ambulance dedication. Photo by Adam Reinherz

Richard Zelin, director of strategic philanthropy for the Midwest Region of AFMDA, credited the Bergs with aiding an organization that predates the state of Israel, and said the newly dedicated vehicle will help numerous citizens: “This ambulance will be there to respond to terrorist attacks, typical medical emergencies and also to bring new lives into the world.”

Before the Sept. 12 function, Joe Talmonte, of Auto Driveaway, brought the vehicle from Carnegie to Finleyville. On Monday morning, Talmonte delivered the ambulance to Squirrel Hill, where he told the Chronicle he was “ecstatic” to see the ambulance continue its travels to Israel.

“It’s going to be helping people,” he said.

Standing beside the shiny white new vehicle, Strip told scores of curious Community Day School students that after the ambulance leaves Squirrel Hill it will be sent to Baltimore, then placed on a crate with other ambulances for shipment to Haifa.

The donated vehicle will endure a lengthy journey, but those driving the enterprise have experienced one as well.

Jeff Berg told the Chronicle that although he and his wife spent almost seven years working toward getting an ambulance to Israel, the couple’s connection to the Jewish state began decades earlier.

Arlene Berg first visited Israel in 1974. Jeff Berg was introduced to the Jewish state while working on a kibbutz in 1979.

Since the 1970s, the couple organized several Christian tours of Israel, however, their attitude toward the country and its inhabitants significantly shifted during the Second Intifada.

Israel had always been a “biblical issue, but it became a moral issue,” Jeff Berg said. “There was so much blood being shed. All these terrorist bombs in restaurants and Israelis just suffering under organized terror. It was just terrible … We became pro-life for Israel and wanted to do anything to see Israel live.” 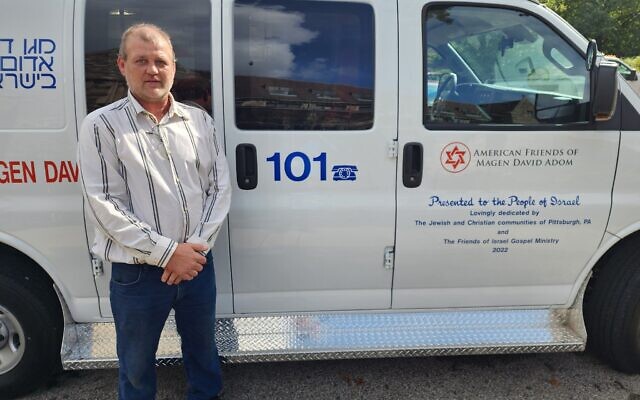 Joe Talmonte, of Auto Driveaway, stands beside the ambulance. Photo by Adam Reinherz

Arlene Berg said that she and her husband began volunteering with the Jewish Association on Aging and were introduced to Rabbi Eli Seidman, who suggested the possibility of donating an ambulance to Israel.

Seidman, a retired JAA staffer, credited his former colleague Sharyn Rubin with helping the Bergs. He and praised the Plum Borough residents for bringing their “dream” to life.

Pittsburgh Shinshinim Einav Mayer and Michal Dekel observed the outdoor dedication, which was relocated from the JAA to CDS due to COVID-related concerns.

“Something like this, where both Jewish people and non-Jewish people help and contribute and assist, is beautiful,” Mayer said.