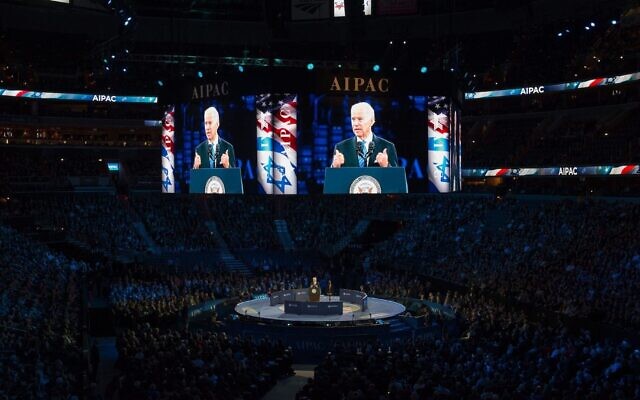 Joe Biden, then vice president, speaks at the AIPAC 2016 Policy Conference on March 20, 2016 in Washington, DC.(Molly Riley/AFP via Getty Images)

WASHINGTON (JTA) — The American Israel Public Affairs Committee’s newly formed political action committee released its first list of 120 congressional endorsees, and more than a quarter of them are Republicans who voted against certifying Joe Biden as president.

AIPAC defended the inclusion of the 37 Republicans who would not certify Biden, noting its status as a single-issue organization focused on Israel. But the picks stirred controversy among past AIPAC leaders and liberal pro-Israel groups who reject Donald Trump’s false claims about a stolen election and the lawmakers who indulge him.

“As a single-issue organization, we remain focused on our mission of building bipartisan support in Congress to strengthen the U.S.-Israel relationship,” spokesman Marshall Wittman told the Jewish Telegraphic Agency in an email.

In December, AIPAC announced it was breaking with decades of tradition and directly involving itself in candidate fundraising.

“Whatever their views on Israel, elected officials who threaten the very future of our country should be completely beyond the pale,” J Street’s national political director, Laura Birnbaum, said. “We call on AIPAC to immediately end their support for these candidates — or explain what could possibly justify supporting those who effectively sided with the insurrectionists on January 6th.”

AIPAC endorsed 61 Republicans and 59 Democrats in this first go-round. One of the endorsees, Jim Jordan of Ohio, was so prominent in the events surrounding the Jan. 6 insurrection, which led to deadly violence, that he has been invited to testify before the congressional committee investigating the event. Jordan has refused to testify and may be subpoenaed.

Critics from both parties argue Trump spurred the insurrection with his false claims that Biden was not duly elected, and that he was the rightful president. His followers sought to stop Congress from its largely symbolic task of certifying the electoral vote. Some 147 Republicans voted, even after the violence and the storming of the Capitol, against certifying Biden.

The stigma of association with the insurrection appears to have spooked at least one nonpartisan pro-Israel PAC, Pro-Israel America. That group has funneled money to two Republicans who refused to certify, Nicole Malliotakis of New York and Carlos Gimenez of Florida — but neither Republican is on its official endorsement list. None of the Republicans on its official list voted against certifying Biden.

Democrats and liberals who were once closely aligned with AIPAC have said that they would be crushed if its PAC endorsed lawmakers who voted against certifying Biden.

“It would show them to be doctrinaire and not reasonable [in] their support of pro-Israel candidates, and I think that’s a dangerous, dangerous way to be,” Betsy Sheerr, a past board member, said in an interview with the Jewish Telegraphic Agency in December, after AIPAC established the PAC. “‘Well, they’re pro-Israel.’ So you discount everything else? You can’t discount everything else.”

Tom Dine, who was AIPAC’s professional boss in the 1980s and early 1990s, told Haaretz in January that he would not give the AIPAC PAC “a dime” if it backed lawmakers who voted against Biden’s confirmation.

Martin Raffel, a former senior official at the Jewish Council for Public Affairs who worked closely with AIPAC, wrote a column for a Jewish Democratic website titled “Whither AIPAC” last month. He noted his affection for the organization, but warned it against backing any of the 147 Republicans who voted against Biden.

“On the line now is not this or that policy, but nothing less than the very survival of our democracy,” he said.

The Republican Jewish Coalition is endorsing at least two Republicans who voted against Biden’s confirmation, Gimenez of Florida and Mike Garcia of California. NORPAC, a nonpartisan pro-Israel PAC, has fund-raised for Elise Stefanik of upstate New York, who voted against certifying Biden. PJC