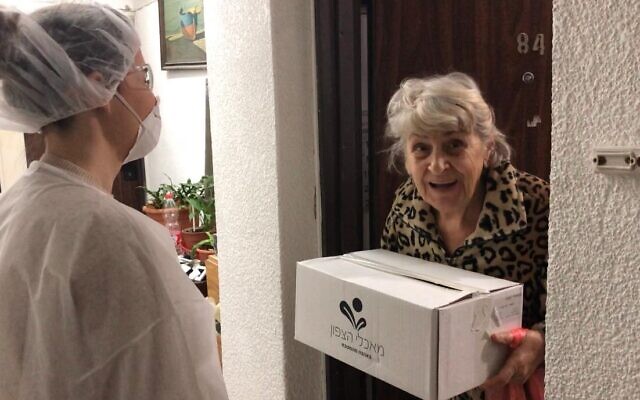 Since the start of the coronavirus pandemic, Leket Israel has distributed 60% more fruit and vegetables, and 50% more hot meals than before, due to increased demand. Courtesy photo via J

In early July, Knesset member Tzachi Hanegbi maintained on Israel’s Channel 12 news that those who claim to have reached the point of starvation because of economic struggles during the coronavirus outbreak are speaking “nonsense.”

Israel, like most countries around the world, has experienced economic hardships, with a growing number of citizens reporting being hungry and unable to afford food. However, organizations on the frontlines of food insecurity in Israel did not discredit Hanegbi’s statement as out of hand, even though he faced intense criticisms for being “out of touch” and “thoughtless,” undermining the growing distress of many households in Israel.

And some viewed it as an opportunity for the truth to come out about hunger in Israel.

“Hanegbi unintentionally did us a favor when he raised the issue,” Gidi Kroch, CEO of national food bank Leket Israel, told JNS. “A lot of people are dealing with this,” so to raise the issue of food insecurity “is a blessing for us, though perhaps not in the way we wanted it to happen.”

Since the outbreak of the coronavirus crisis, said Kroch, Leket Israel has distributed 60% more fruit and vegetables, and 50% more hot meals than the period before, due to increased demand. More than 31 local authorities turned to Leket to distribute food to those in need, compared to only five local authorities in the period prior to the emergency regulations, he reported.
“In the days before corona[virus], we used to receive donations of surplus cooked meals from hotels, corporate cafeterias and [Israel Defense Forces] army bases, as well as donations of surplus fruit and vegetables from farmers, all of which we would distribute through the hundreds of nonprofit organizations we work with, reaching 175,000-plus people in need,” explained Kroch. “Unfortunately, it must be said that due to the pandemic, this number of needy recipients seems small and very distant from today’s reality, which is much more complex.”

He noted that “in mid-March, with the onset of the emergency regulations, we stopped receiving donations of surplus cooked food due to the forced closure of the hotels and businesses with which we collaborate.”

Distributing more than 700,000 hot meals — 12,000 per day at the peak, whereas before the pandemic it was closer to 8,000 — directly to the homes of those in need from mid-March until the end of April, he reported a “transformation in the people requesting food.”

Now, he said, many send their children to soup kitchens. “Sadly, many of those we supported were never on our radar beforehand. They are completely normative people who worked hard and earned a living until they were thrown into an unprecedented economic hardship.”

While Israelis have always struggled with food insecurity due to the high cost of living compared to other OECD countries, the impact of the coronavirus and subsequent furloughs, lost jobs and decreased incomes are causing an increasingly negative impact. 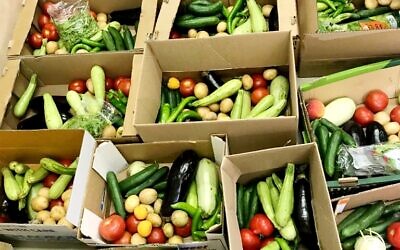 Produce not taken by residents will be given to a collective of women who prepare hot food and preserves to be sold. Courtesy photo via JNS

‘Food forests in urban public environments’
Daniella Seltzer started the grassroots organization JLM Food Rescuers two years ago to raise awareness about food waste through workshops, lectures, community meals and gatherings. In the face of coronavirus, her team has also begun to “rescue” food from the Givat Shaul food market — five tons of food every week — that would otherwise be thrown out, distributing it in food baskets.

As Israel is now witnessing a resurgence of the virus, Seltzer told JNS that even after being rehired by companies that had previously furloughed workers, many Israelis (and food producers themselves) remain in a vulnerable situation.

But her ideology goes beyond giving people food to rethinking food systems and developing a “community-engaged model which empowers communities to create their own networks of food rescue and redistribution based on produce from the wholesale market and neighborhood businesses and institutions that discard food.”

“Ideally,” she continued, “markets will become a thriving hub for people to meet. The markets will be sustainable, and will become a vibrant and important gathering place, providing opportunities for neighbors to meet, share information and celebrate (for example, clothing swaps, Do-It-Yourself workshops, repairs, etc.).

“Many organizations in Israel working around food rescue and welfare maintain the giver-receiver relationship, which retains dependency. We suggest a paradigm shift from this linear economy to a network-based, participatory model in which every partner who wishes to receive a produce basket plays a role in it,” she explained.

Produce that isn’t taken by residents “will be given to a collective of women who will gather in a community kitchen to prepare hot foods, ferments and preserves that will be sold. The profit will go to the women and to supporting the project such that it remains sustainable in the long run,” said Seltzer. “But what we need most is to stop depending on corporations and big agribusiness for our food. The pandemic has made it clear why, baring many of the current food system’s fault lines,” including greenhouse gases and not being “truly dedicated to the needs of the people and community.”

“I believe that the hidden costs of the conventional food system are slowly beginning to resonate in the public domain,” Seltzer said. “Food security has been getting a lot of public attention during this period, and I hope that it will continue because it is a problem not only in times of crisis.” 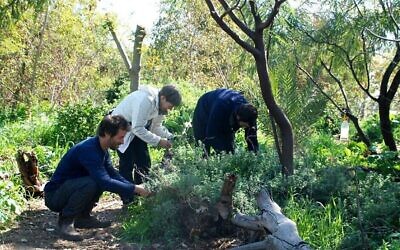 Volunteers with ReForest design and build food areas in urban public environments and farmland around Israel.Courtesy photo via JN

Rationing food and household items
A 20-year-old national service volunteer, who shared her story on the condition of anonymity, told JNS that she makes just NIS 800 ($232) per month at her job, plus NIS 500 ($145) from the Ministry of Absorption. To make ends meet, she was working as a babysitter and cleaner every day after her national service job, but has been out of such employment since the start of the coronavirus outbreak.

On her modest income, she said, and without receiving support from her family in the United States, she has gone into thousands of shekels of credit card debt in order to purchase food, and is forgoing essentials like deodorant and sanitary items.

She noted that she received food aid for Passover and during the lockdown from the Jerusalem Municipality, but “feels bad for asking for help when I know there are others in worse situations.

“I just keep telling myself that I’ll pay off my debt next year when I get a job, but I’m not sure if I’ll be able to find a job in the current economy,” she said, adding, “the minister is so wrong. I have to ration what food I’m buying because I don’t want my debt to become too much. There are so many people struggling to buy food and basic amenities.”

Israeli nonprofits that provide hot meals soup kitchen style, gift cards for groceries and pre-packed food packages include Leket, Colel Chabad, Meir Panim, Tachlit, Yad Eliezer, Ezer M’Tzion and Yad Ezra v’Shulamit. These organizations “give the government a buffer to get that going,” said Kroch, though he is yet to see an official government plan to reduce food insecurity.

Lyor Rabinowiz co-founded Israeli food security organization ReForest, which designs and builds food forests in urban public environments and farmland around Israel for communities to enjoy. Mimicking natural forests with a range of fruit trees, medicinal shrubs, vegetables, perennial plants, it creates ecosystems that are attentive to soil building and health, as well as water retention and animal health.

Combining ecological restoration and food production, Rabinowiz said, is “how our ancestors used to farm” and is becoming more popular in Israel, especially in the context of Israeli water technology. With 17 projects under its belt since the organization launched in early 2020, ReForest has worked with Israeli cities, kibbutzim, moshavim and farmers who have reached out to transform their farms and public spaces into abundant landscapes for the entire community to enjoy.

From design to implementation, planting, maintenance and education, this, said Rabinowiz, not only helps mitigate the impacts of climate change by storing carbon in the soil and taking care of the water cycle, but it increases food security in Israel. PJC