Hundreds gathered Saturday for a Havdalah organized by the National Council of Jewish Women one day after the Supreme Court struck down Roe vs. Wade. Photo by Kimberly Rullo.

Hundreds of concerned community members gathered Saturday evening outside the Murray Avenue office of the National Council of Jewish Women: Pittsburgh for an event dubbed “After Roe: A Havdalah Ritual for Losing Abortion Access.”

“This week, we are marking a very significant separation,” Glickman told the audience. “The separation from one way of being with abortion access in this country for nearly 50 years and another. Separation where abortion was the legal law of the land to a country where it is no longer so.”

Glickman added that the Supreme Court’s 5-4 June 24 decision to overturn Roe v. Wade, which recognized a woman’s constitutional right to an abortion, will cause “more people to be harmed with disastrous effects on their autonomy, dignity, safety, health and lives.”

The Supreme Court’s ruling has been derided by many in the Jewish world who say it could force Jews to choose between halacha, or Jewish law — which is widely understood as permitting, or even requiring, abortion in certain circumstances — and following state laws placing restrictions on or largely criminalizing the procedure.

The American Jewish Committee was one of several Jewish organizations that were swift in releasing statements condemning the decision: “Overturning abortion access, as numerous states already have, denies individuals health care options consistent with their religious beliefs, including many in the Jewish community, thereby presenting issues of religious freedom and privacy. Just as the religious freedom of those whose faith renounces abortion must be protected, we insist on the protection of the religious freedom of those whose faiths would permit the choice of abortion.”

Mayo began the Havdalah service by noting that those in attendance “came in love.”

“That’s something no one can take from us,” she said. “If you came with a friend, a loved one or came by yourself, get a little closer and remind ourselves that we all stand here together and that we are stronger than anything that rises up against what we care about.” 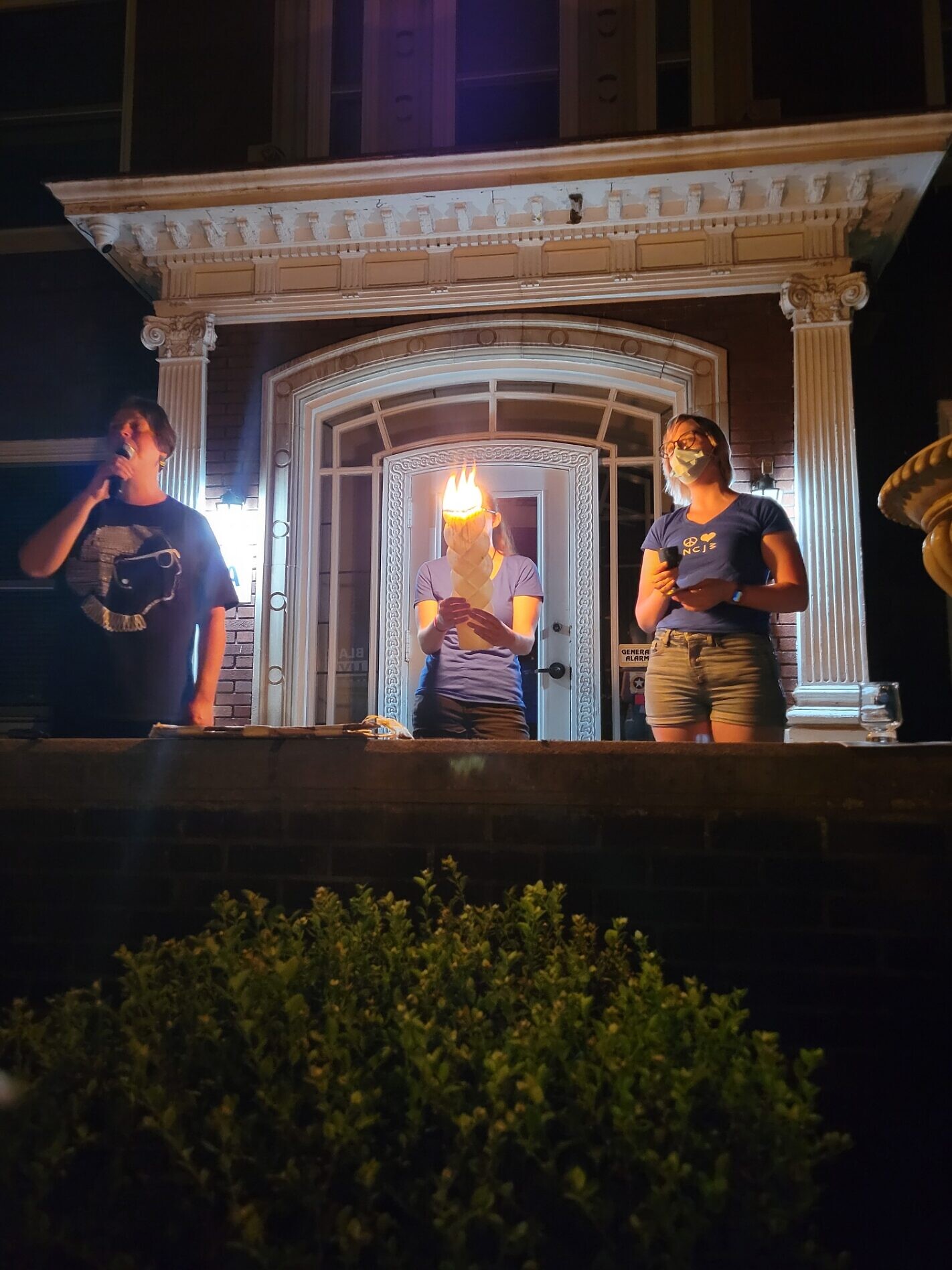 Mona Strassburger said she decided to attend the Havdalah ritual as a first step in demonstrating there are people unhappy with the Supreme Court’s decision.

“It’s an invasion of my body,” Strassburger said. “My body, the reactionaries said couldn’t put a mask on. My view is that the Supreme Court cares about births, not babies, because there is nothing that is protecting children who don’t have child care or health care.”

Matt Feinman said he attended because, regardless of gender, certain rights are fundamental.

“I’m not a woman, I can’t have an abortion, but that doesn’t mean that if I can’t have it no one else should be able to have it,” he said.

The Pittsburgh resident said he is concerned the decision might be a harbinger of the reversal of LGBTQ and contraceptive rights.

“Why should anyone’s rights to have the same freedom as anyone else be taken away? This is one step that will continue to snowball if not checked,” he said.

Nancy Harvey wanted to attend the NCJW ceremony to show her anger, she said.

“I feel like if we all come together and fight this, maybe we can do something and make a change,” she said.

Harvey attended the event with her friend Donna Hanlon. The pair plan on speaking with their state representative and Republican lieutenant governor candidate Carrie DelRosso at an Aug. 11 event.

“She’s not been very vocal on this issue until this week,” Hanlon said. “She’s a woman. She’s our representative, so I want to talk with her.”

“She needs to be accountable,” Harvey said.

Mayo, too, believes it’s important for the community’s voice to be heard. The Havdalah event was a valuable first step, she said, allowing people the chance to join together in reflection.

“One of the primary rules of organizing is that you have collective space for what you’re feeling first,” Mayo said. “If you just react in anger, it’s not going to fuel us for the long haul. And we have to remember, we’re not just fighting against people, we’re fighting for something. To me, that’s really important, to just remember what we’re fighting for.”

Glickman said reproductive justice is a core principle of NCJW, and that the organization had planned a Havdalah service to follow the court’s ruling since a draft of the decision was leaked earlier this year. 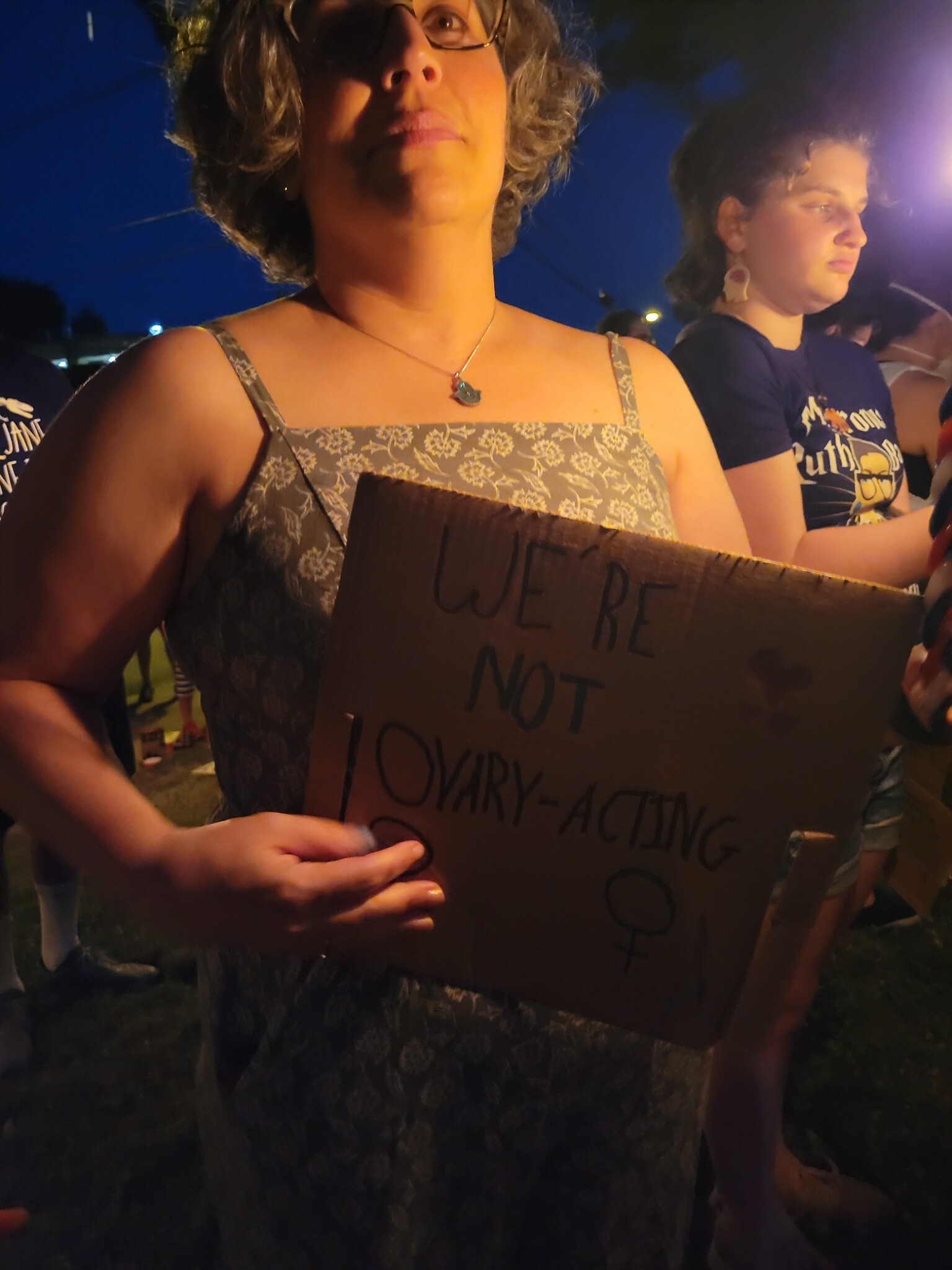 Some community members showed their anger at the recent Supreme Court decision overturning Roe Vs. Wade through signs. Photo by David Rullo.

“We knew from the leaked opinion what was going to happen. It’s still really a punch in the gut,” she said. “There are a lot of people in our community who are hurting and are feeling sad and concerned and worried. This is what we can do to gather people in solidarity.”

Rabbi Jessica Locketz said she felt it was important to attend the Havdalah service for just that reason.

“We need to come together as a community to support each other,” she said. “I am grateful to NCJW for creating the ritual and encouraging us to gather during this time of tremendous anger and deep sadness.”

In the end, the rabbi noted, it will take the same sense of unity to safeguard abortion rights.

“We will need to work together to undo what has been done and ensure reproductive health and safety for all,” she said. PJC