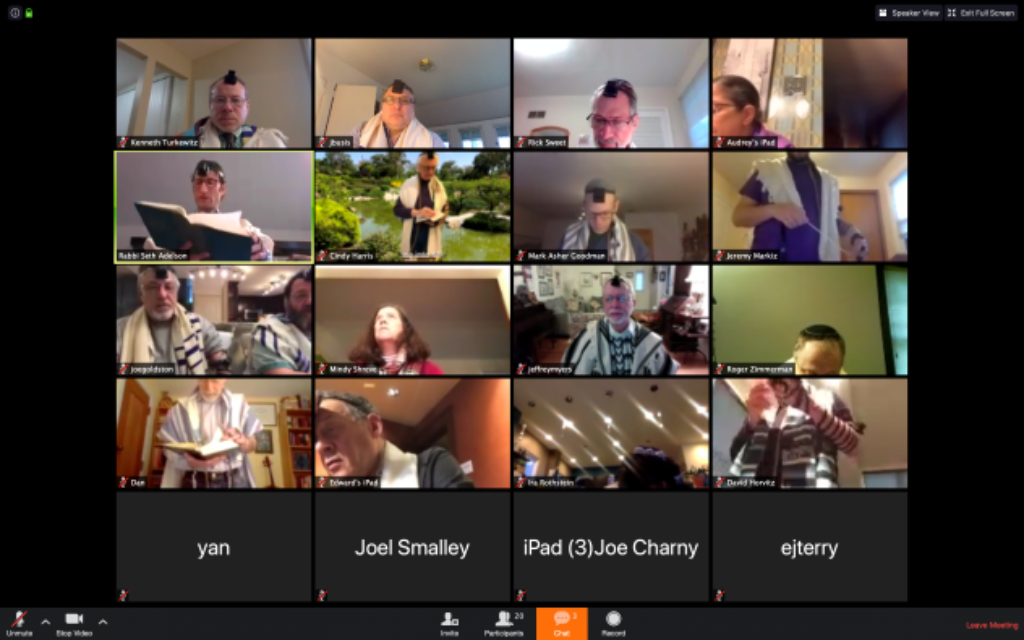 My beloved father always kept in his back pocket a special reddish-brown notebook in which he’d record his many scientific inventions, a list of his daily meals, and occasional drawings of whimsical cartoon bunnies. When he passed away on Nov. 22, 2019, I thought it only fitting to buy that same type of notebook to record the many synagogues around the country, perhaps even the world, where I’d recite Kaddish daily for my father over the next 11 months.

Never would I have imagined that for about eight of those 11 months, I’d be reciting Kaddish day after day in my very own home as part of an online minyan taking place over Zoom.

I’m not exactly sure how I seized on the idea of reciting Kaddish daily. I don’t recall any other close family members observing this tradition. But I’d had several friends who had recited Kaddish daily for their parents, and when my father passed away, I felt completely drawn to the practice both as a way of honoring him and maintaining our day-to-day connection. Saying Kaddish has given me something concrete to do throughout the yearlong mourning process — something that keeps my relationship with my dear father in the present and future, not just in the past.

When I gingerly walked into the evening minyan at Congregation Beth Shalom following the shiva period, it marked the first time I had ever attended a weekday, non-High Holiday synagogue service. Surveying the dozen or so congregants already assembled, I was surprised by the familiar faces: a friend who recently lost her mother; another friend’s husband who lost his mother last winter; and of course, the dear family of my beloved friend Leon Zionts who passed away just 12 days before Dad. We were an underground club of mourners, supported by the minyan regulars. And even if I felt baffled by much of the prayer service, I felt like we all spoke the same language — the language of mourning and remembrance.

In those pre-COVID days, I made the most of my time out in the world, attending minyanim at any shul that fit into my schedule. My husband, son and I came to stay with my parents when my dad started home hospice, and we stayed on after he died, so my mother often joined me at synagogue. Beth Shalom’s evening minyan was our most regular spot, but we also attended an occasional morning minyan.

On Shabbat, we often attended Temple Sinai, my parents’ lifelong synagogue. We also went to Shaare Torah, particularly on Fridays before Shabbat dinner, taking our place in the women’s section. Early on, I remember Rabbi Daniel Wasserman kindly taking note of my presence and, using his powerful voice, significantly slowing down the tempo of the Kaddish so I could keep up. Mom and I could hear Dad enthusiastically marveling at our devotion: “You’re going to say Kaddish again? You’re kidding!”

One evening, my mom, my son and I even stopped into the Downtown Shul to say Kaddish before seeing a show at the Byham Theater. We quickly learned that Rabbi Stanley Savage knew my father’s father — pharmacist David Nathanson — and the rabbi regaled us with stories of “Dave’s store.” I felt a deep sense of connection and wonder.

One day in February at Beth Shalom, a fellow mourner announced with tears in his eyes that that evening marked the end of his time saying Kaddish for his father. “I never expected to do this,” he told us. “And it’s just been so meaningful.” Recording this in my notebook, I added, “I squeezed his hand and later gave him a hug.”

By early March, however, hugs and handshakes had been replaced by elbow bumps, which soon gave way to sheepish waves from an awkward distance. On March 12, Beth Shalom held its first socially distanced evening minyan, with members separated from each other by multiple rows. The next day, Beth Shalom announced that, in an abundance of caution, all daily minyanim would be moved to Zoom.

Very early on, many people kept their cameras off, so the sense of community was dampened. Soon, though, the Conservative movement’s Rabbinical Assembly issued guidelines stating that we needed to be able to see each other’s faces on screen to count as a minyan. The first time I saw the face of congregational stalwart Ira Frank, I burst into tears. I deeply missed being in the same physical space with everyone.

On March 22, when Rabbi Wasserman sent out a heartbreaking email about the need to close Shaare Torah’s building, I wept on my husband’s shoulder.

In those early months of the pandemic, I felt isolated and extremely anxious, and I had a very difficult time focusing on the prayers — but Beth Shalom’s daily evening minyan added a sense of stability to my days that proved invaluable.

The minyan also provided me with an important new friendship. Marlene Cohen Behrmann, a fellow congregant who I’d never met before, lost her father exactly four months after I lost my dad. Because of COVID-19, however, Marlene was unable to fly to attend her father’s funeral in South Africa, and she became the first congregant to have an online shiva with Beth Shalom.

Reaching out to Marlene after minyan one evening, I discovered that because the two of us were both in mourning in the midst of a pandemic, we understood each other in ways that other people might not. By sharing more about our fathers — and our fears about COVID’s potential impact on our mothers — Marlene and I were able to comfort each other and develop a deep friendship in the process.

And that, of course, is the wisdom of Judaism. Jewish tradition helps provide a grounding sense of continuity, community and goodness. So life goes on, even after a parent dies, even in the midst of a plague. PJC

Elinor S. Nathanson is a writer/performer and the proud daughter of Harvey C. Nathanson.