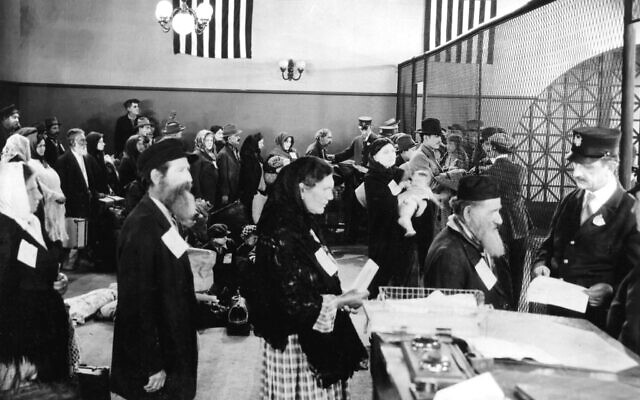 It’s the ninth question on the census, and for many Jewish respondents, it’s a surprising — and sometimes unwelcome — invitation to consider who exactly they are.

For the first time, the U.S. Census question on race is asking white and African-American respondents to dig deeper and fill in more detailed origins.

The request for “origins” has existed for decades for Native American, Hispanic and Asian/Pacific Islander respondents. But whites and blacks were previously asked to simply check a box.

The question has launched countless Jewish conversations: “What did you list?” “What should I?”

The answers reveal a community grappling with what it means to announce one’s Jewishness in the 21st century, and to consider the myriad paths that have brought American Jews to the present day.

“I didn’t see a box for ‘stateless people being abused and kicked out of one Eastern European region after another,’ so this seemingly straightforward question turned out to be quite a head-scratcher,” said Jonathan Kopp, a communications strategist who lives in Brooklyn.

Kopp, 53, abandoned the form for a while before returning and checking “white.” He entered “Eastern European Ashkenazi Jew” in the origins box.

Jeff Weintraub, 72, an academic who lives in the Philadelphia area, said he thought the race/ethnicity/national-origin questions on the census form “were a little bizarre.”

“I checked ‘white’ and then, for elaboration, wrote something along the following lines in the box: ‘Jewish — grandparents from the former Russian Empire and the former Austro-Hungarian Empire,’” he said.

One complicating factor: The online census form makes it appear as if the “origins” question is not optional — but it is.

Leave the space empty, click continue and the page won’t change. The blank field will be highlighted, urging the user to fill it. Click one more time, however, and you’re able to move to the 10th question without filling it in. That’s not explained on the census form.

That hurdle led some to believe that the “origins” question required typing in an answer.

“Ashkenazi, just because,” said Debra Rubin, an editor in the Washington, D.C., area. “It didn’t allow me to skip, and I don’t understand why the question is there. I guess I could have put American.”

What’s in a question about race?
Race has been a factor in the U.S. census since the first one, in 1790, but for the nation’s first century and a half, the answers were used as a means to codify rather than crush discrimination. The first census counted “free white males, free white females,” “all other free persons” and “slaves.”

Now it is a means of redressing discriminatory practices.

“This data helps federal agencies monitor compliance with anti-discrimination provisions, such as those in the Voting Rights Act and the Civil Rights Act,” it says on the census website.

For decades, the race category has had four broad categories: white, black, Native American and Asian, with “some other race” as the fifth option. Whether one is of Hispanic origin is a separate question.

This year’s extension of the “origins” option to whites and blacks was a result in part of lobbying by groups of Middle Eastern and North African origin who said their constituents were uncomfortable checking “white” and thought the “some other race” option was overly broad. For a period leading into the 2020 census, U.S. Census bureaucrats considered making “MENA” a separate category.

Austro-Hungarian what?
Many of those replying to a query from the Jewish Telegraphic Agency said they were not sure how to respond because their ancestors’ countries of origin no longer exist or have shifted borders, or because their ancestors were not precisely from a single place — born in one country to parents from another. For many, “Askenazi” or “Sephardic” became a default because it expressed an ethnicity in a simple way.

“The vast majority of my family’s ancestral origins are Russian/Ukrainian Jews, but putting either of those didn’t seem quite accurate,” said Alex Dropkin, 29, a Chicago-area brewer who answered “Ashkenazi.” “The whole national origin for Eastern European Jews is complicated and not at all translatable to [one] modern country.”

“Family records for Russian Jews rarely exist and it’s hard to know very much more about our ancestors because of all the pogroms,” he said.

Felicia Grossman checked “white” and entered “American” for “origins” after discussing it with her husband.

“We all came early enough that we were never considered full ‘citizens’ of any other country, and half the places don’t exist anymore as it is (i.e. ‘Bavaria,’ ‘Austria-Hungary’ and the Ottoman Empire — not to mention places that didn’t exist and now do i.e., Lithuania, Belarus, and Ukraine), so there’s an argument that it’s the most accurate answer,” said Grossman, 37, an author of historical romances who lives in the Cleveland suburbs.

Lloyd Wolf, an Arlington, Virginia, photographer, packed as much as he knew into his answer.

“I put in something like ‘Jewish of German, Austrian and Polish origin’ because that’s what my background is, at least the past several generations,” he said on Facebook.

Same country, different peoples
Morris Lewis, a health care consultant in Caldwell, New Jersey, said his neighbors growing up in Mississippi and Georgia were likelier to identify his family as Jewish than with the non-Jewish neighbors whose ancestors had arrived from the same countries.

“We may have shared space with Poles, Germans, etc., but we have a completely separate ethnicity and culture,” said Lewis, 59, who entered “Ashkenazi Jewish.”

Susan Turnbull, who lives in Washington’s Maryland suburbs and has held leadership positions in national Jewish organizations and the Democratic Party, took her cue from the categories made popular by the recent proliferation of DNA testing.

Suellen Shapiro Kadis, a lawyer who lives in the Cleveland area and is a board member of JTA’s parent organization, 70 Faces Media, said she entered “Russian” but was not happy with it.

“My dad was born in England on the way over. His immigration papers say ‘Hebrew,’ which I always thought was a way to discriminate, but maybe it’s more accurate than my answer,” she said.

“I did this to document that though I am white in certain contexts, especially in the U.S., I’m actually ethnically distinct and come from a group of people with our own unique history,” Gunz said.

(Jewish) Pride and (anti-Jewish) prejudice
Some respondents welcomed the opportunity to celebrate their origins.

“I simply don’t identify as anything else other than Jewish,” said a Hasidic respondent who asked not to be named.
Judith Marks said she was proud to answer “Askenazi Jewish.”

“Being Jewish is a huge part of my identity, it’s my primary identity,” the program manager at a nonprofit in Boston said.

Marks, 31, said she thought the question could help shatter the sense of privilege among other whites.

“It’s important for me to identify as white because I benefit from white privilege and am perceived as white,” Marks said. “When you are forced to dig deeper, to go beyond the just ‘I’m white,’ you’re put in the same boat as other people.”

Others welcomed the opportunity to express in the census the otherness that they feel separates them from being simply white in America.

Rebecca Einstein Schorr, a rabbi at Lafayette College in Easton, Pennsylvania, checked “some other race” and entered “Ashkenazic (Jewish).”

“My experience moving through society differs from those who are white,” she said. “The constant sense of being othered. The sense of anti-Semitism.”

Some respondents were wary of the question.

“I can’t think of anything good the census bureau would be using the ethnicity origin data for,” said Frederick Winter, 72, a retired federal employee living in Arlington. “I understand that by law census data is not shared with other agencies, but I have my doubts.”

He checked “white” and entered “USA” for origins.

For one couple, sensitivities about being Jewish in a non-Jewish society broke in opposite directions.

Gabriel Botnick, a Los Angeles-area rabbi, was set to enter the fifth option, “some other race,” and add “Jewish” because he does not identify as “white” — he said “I have been made to feel” not white in the past. His wife, also a rabbi and originally from Britain, asked him to check “white” and skip the origins.

“She said this current climate makes her uneasy with being listed as Jewish somewhere,” Botnick said. pjc