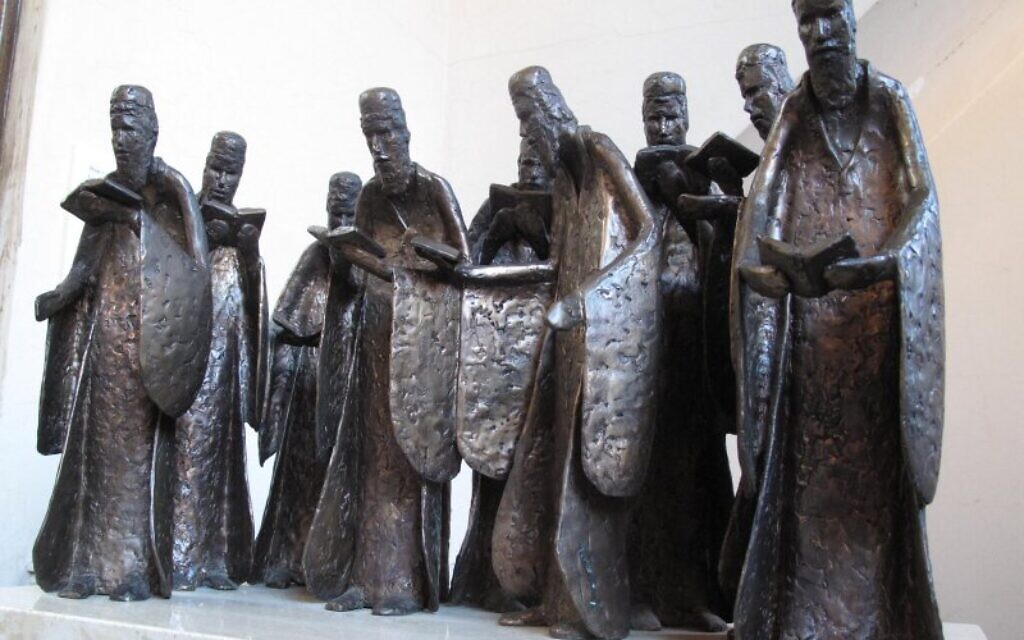 I live in one of the most concentrated Jewish communities in the United States, the Upper West Side of Manhattan, and I no longer have a daily morning minyan to attend in person.

It seems that in my neighborhood, as well as many others, COVID-19 snuffed out the live morning minyan — the daily prayer service that needs a quorum of 10 Jews — in non-Orthodox settings. Pre-pandemic I had a choice of multiple minyans I could attend in a variety of egalitarian Jewish settings — synagogues and schools — but none of them is operating in-person now.

I worry that the minyan muscle has atrophied in my community, and the habit has been lost of rising early in the morning, getting out the door with prayer shawl and tefillin, and making it inside the beit midrash in time for prayer.

It’s not that non-Orthodox Jews in my neighborhood aren’t praying each morning. Many are, both alone and online, where services moved for non-Orthodox Jews last March. Zoom services were a necessary accommodation to a public health crisis, and it is unquestionably easier to tune in to services from home, but it hasn’t worked for me. Fifty disembodied faces on a screen feel less like a community to me than the 15 bodies draped in prayer shawls who huddle around the amud (leader’s table) at a typical in-person minyan. The on-key solo voice of the shaliach tzibur, the leader of the service, inspires me less than the multiple off-key voices of those gathered live for prayers.

As Shabbat and holiday services have resumed, with precautions, in person, I thought the morning minyan would, too. But they have remained resolutely online. I am sympathetic to the reasons why, and to the difficulties of reconstituting the in-person morning minyan. It is hard work in many non-Orthodox synagogues to assure that 10 people will be present early in the morning six days a week. It is much easier and more convenient to get out of bed, hit a button on the computer and be transported instantly to the minyan. And without question Zoom has made it possible for those unable because of physical limitations and other reasons to attend an in-person minyan.

Yet there is so much that has been lost and that I miss. I miss my fellow “minyannaire” who each year before Rosh Hashanah brings me honey from the beehives on the rooftop of his apartment.

I miss the mother and her grown son who start their day together sitting side by side and who kiss one another good-bye as they leave the minyan and go their separate ways.

And I miss the easy banter with my fellow minyannaires with whom I share vacation plans, exploits on the pickleball court and the most recent achievements of my grandchildren. I miss how the in-person morning minyan magically imbued the minute details of the mundane with the significance of the sacred.

But above all I miss what Abba Kovner, the late Jewish resistance fighter, called “the tug on the sleeve.” Kovner would tell the story of going to the Western Wall his first week in Israel after the end of World War II. He was about to leave when he felt a tug on his sleeve as he was asked to join a minyan that was forming for prayer. He tells of being inspired not so much by the prayers but more by the sense of belonging. More than anything else I miss knowing that my physical presence is needed to make a minyan.

For more than 40 years, I was responsible for making the minyan happen in my suburban Long Island synagogue. There were many nights I did not sleep well worrying that 10 people might not show up the next morning, and I took too personally the days when only nine people attended and a mourner was unable to say Kaddish. Looking back at all the worry and frustration, I nevertheless feel that I was engaged in worthy work.

Many people, religious and not, yearn for places where they can gather, connect and socialize with other people outside of the home and workplace. Sociologists call these settings “third places,” and so many of them closed during the pandemic — bars, coffee shops, gyms, libraries — that experts fear the impact on people’s mental health and social well-being. As a psychology professor at the Graduate Center of the City University of New York put it at the height of the pandemic, “What’s lost is the sensory sense of being with other people. I don’t think we know yet what the consequences of that will be, except that I think people are going to remain more fearful and anxious.”

Many years after Abba Kovner was called to be the 10th for a minyan at the Western Wall, a museum known as Beit Hatefutzot, the Museum of the Diaspora, was built on the campus of Tel Aviv University. (It has now been overhauled and renamed Anu — Museum of the Jewish People.) Kovner designed a corner in the museum known as “The Minyan” represented by a variety of figures preparing to pray together. Just before the museum opened its doors for the first time someone noticed that there were only nine figures in the model. The museum frantically reached out to Kovner, but he calmly responded that nine was the correct number: There was supposed to be a missing person. The missing person was a call to each person who visited the museum to become the 10th.

When I do join the Zoom minyan of my synagogue community, I note the faces and names of my fellow participants. When it is a day I am observing a yahrzeit, the anniversary of a loved one’s death, I dutifully tap the “raise hand” button so I can be called upon to mention the name of the person for whom I am saying Kaddish. But I yearn to feel again the tug on my sleeve, and to be told to come inside because there are nine people who need me as the missing tenth. PJC

Neil Kurshan is rabbi emeritus of the Huntington Jewish Center in Huntington, New York. This piece first appeared on JTA.