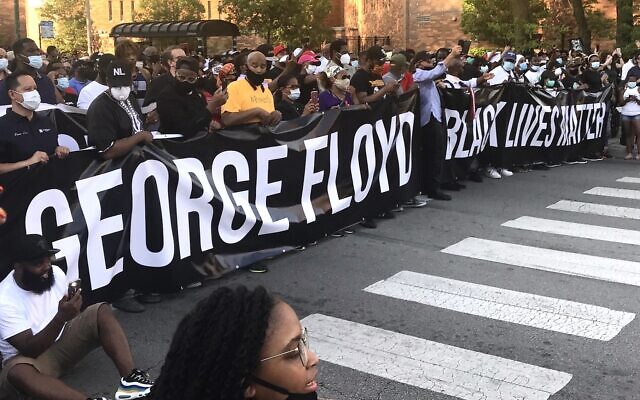 Marchers at the front of an interfaith demonstration in Chicago remembering George Floyd and protesting systemic racism, June 2, 2020. (Courtesy of Ari Hart)

(JTA) — More than 800 rabbis and cantors, including the leaders of three major denominations, signed a statement in support of peaceful protest against racism and in memory of George Floyd.

The statement invoked Rabbi Abraham Joshua Heschel, an iconic Jewish civil rights activist who marched with the Rev. Martin Luther King Jr. It was written and distributed by the Reform movement’s Religious Action Center, a political advocacy organization that has a long history of civil rights activism.

“Mr. Floyd was a victim of the nation’s long history of brutality against people of color, and particularly Black men,” the statement reads. “Protests are a just response to all-too-familiar anger, frustration, and pain. I stand for the right to peaceful protest and call on our nation’s law enforcement and elected officials not to interfere with this bedrock First Amendment expression.”