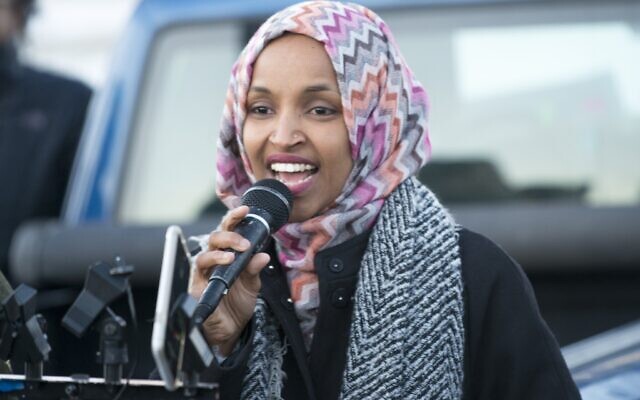 WASHINGTON (JTA)– Twelve of the 25 Jewish Democrats in the U.S. House of Representatives said the grouping of the United States and Israel with the Taliban and Hamas in remarks about pursuing war crimes prosecutions gives “cover to terrorist groups” and called on their caucus colleague, Rep. Ilhan Omar, D-Minn., to clarify her earlier statements.

“Equating the United States and Israel to Hamas and the Taliban is as offensive as it is misguided,” said the statement released late Wednesday and spearheaded by Rep. Brad Schnieder, D-Ill. “Ignoring the differences between democracies governed by the rule of law and contemptible organizations that engage in terrorism at best discredits one’s intended argument and at worst reflects deep-seated prejudice.

“The United States and Israel are imperfect and, like all democracies, at times deserving of critique, but false equivalencies give cover to terrorist groups,” the statement continued. “We urge Congresswoman Omar to clarify her words placing the US and Israel in the same category as Hamas and the Taliban.”

The statement came after a meeting of the unofficial Jewish Democratic caucus earlier in the day that discussed Omar’s tweet on Monday. “We must have the same level of accountability and justice for all victims of crimes against humanity,” Omar posted. “We have seen unthinkable atrocities committed by the U.S., Hamas, Israel, Afghanistan, and the Taliban.”

Omar and a number of other progressives have been harshly critical of Israel in the wake of its conflict last month with Hamas in the Gaza Strip. Some Jewish Democrats have broadly criticized their colleagues but until Wednesday refrained from naming them.

The Jewish Democrats were meeting Wednesday to discuss rising antisemitism after the Gaza conflict, but Schneider steered the conversation to Omar, whose tweet had drawn sharp criticism from centrist and rightist pro-Israel groups and Israeli officials, as well as Republicans and conservative media.

In the end, he got 11 of the Jewish Democrats to join him in the statement. The others are Jake Auchincloss of Massachusetts, Ted Deutch, Lois Frankel, and Debbie Wasserman Schultz of Florida, Josh Gottheimer of New Jersey, Elaine Luria of Virginia, Kathy Manning of North Carolina, Jerry Nadler of New York, Kim Schrier of Washington, Brad Sherman of California and Dean Phillips of Minnesota, whose Minneapolis area district neighbors Omar’s.

Some Jewish Democrats hesitated to make a statement. Omar’s spokesman, Jeremy Slevin, said her remarks were ripped from context and distorted by the right-wing. “As usual, the far right is ginning up hate against Rep. Omar for a technical question about an ongoing investigation,” he said. “It is the congresswoman’s role as a member of Congress conducting federal oversight to follow the facts, ask questions of the administration and work to make sure the public understands our government shouldn’t deny any person from seeking justice.”

Omar’s tweet contained a video of her questioning Secretary of State Antony Blinken in Congress the same day about why the Biden administration opposes efforts by the International Criminal Court to probe nationals of certain countries for alleged war crimes.

Omar said she did not believe that Hamas, the Afghanistan government, the Taliban and Israel met the threshold of a military justice system sufficient to independently pursue justice. PJC