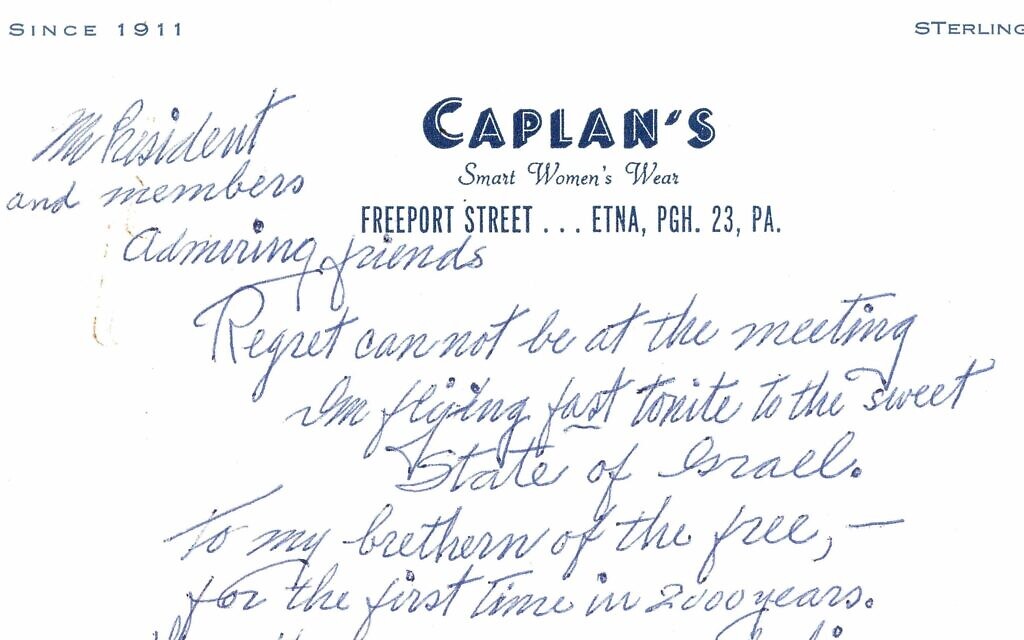 Harry M. Caplan began working for Zionist causes before World War I and finally visited Israel for the first time in April 1958, a year before his death. (Image provided by the Rauh Jewish Archives at the Heinz History Center)

Etna sits along the Pine Creek tributary of the Allegheny River, immediately north of Pittsburgh. Unless you like to explore, you probably only think about Etna during traffic reports. Route 28 is often backed up “from Etna to the 31st Street Bridge.”

A century ago, Etna had a small Jewish community bringing together about 70 people living in towns along the Allegheny River — Etna, Millvale, Sharpsburg, Aspinwall and even a person or two from Blaw Knox. None of those towns could support communal institutions alone, only together. (You find a similar situation in other corners of Western Pennsylvania, most notably the towns of the Kiski Valley.) This community operated a synagogue and religious school out of a rented building at 386 Butler Street. Today, the building is gone. The location is home to Kiya Tomlin’s store.

One of the leaders of this community was Harry M. Caplan. He was born in Poland around 1887 and immigrated to Western Pennsylvania as a young man. He started a dress store on Freeport Street in Etna around 1911 and ran it for the next 45 years, even after he relocated to the East End and became a leader at B’nai Israel Congregation.

His passion was Zionism. He led the Zionist District of Etna and its Junior Zionist Club and helped reorganize the Zionist Organization of America No. 5, covering all of Western Pennsylvania. Toward the end of his life, he became a director of the Hebrew Institute. The Hebrew Institute was not primarily Zionist, but it shared many of the concerns of the movement, specifically an interest in developing the mechanics of Jewish peoplehood: knowledge of Jewish history, sacred Jewish texts and the Hebrew language.

Caplan was what used to be called a “worker.” It described something between “staff” and “volunteers.” Workers did hard stuff, without compensation. Caplan was beloved for consistently taking on two of the most important and least desirable assignments: finding new members and cold calling existing members for donations.

“Some folks won’t touch a task if it doesn’t make the public prints or is not weighted down with glory,” the Jewish Criterion, one of the Chronicle’s predecessor papers, wrote after Caplan’s death in 1959. “Not Harry. Is it a good purpose? Will it bring comfort to a troubled heart? Or might it ease a pain or distress? These are all Harry asked. And he labored so quietly, so utterly without lust for limelight that one hardly realized how vast was the stretch of his service.”

That suggests a reserved, meek figure. In truth, Caplan was a bright light. We have two of his handwritten letters, and both overflow with idealism and camaraderie.

“Admiring friends,” he wrote to the Hebrew Institute board on April 16, 1958. “Regret can not be at the meeting. I’m flying fast tonight to the sweet State of Israel.

“To my brethren of the free —
for the first time in 2,000 years
where the moon and sun really shines
upon them, the stars sparkle like diamonds
their speech sounds like music
their institutions are flourishing
their fields are in full bloom
their trees bear fruits
their cattle gives real milk and butter
their bees furnish the honey-blossom perfumes.
That’s why they celebrate the 10th ANV
and the loyal Jews of the entire Jewish world
here-abroad and in our own land join them
with prayers, song-dance-happy-and laughter.”

The letter ends with a version of the Priestly Blessing written in third person — rather than second, as the Torah has it. Caplan was addressing it specifically to those “brethren of the free,” his friends at the Hebrew Institute and other workers like them.

Caplan had a four-point platform for communal work: “For our People — For our Homeland — For our Culture — For our Institutions.” Within that framework, every small effort he made from tiny Etna was advancing a global cause, millennia in the making.

After the Declaration of Independence, in 1948, the local Jewish press naturally sought quotes from the most prominent figures in the community. But the meaning of that moment may have been clearer at the margins: for the sense of purpose it gave to a communal worker from a small town, making cold calls between sales at his dress shop. PJC