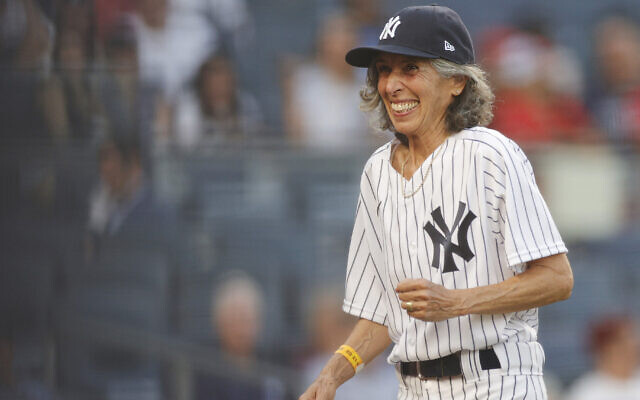 Gwen Goldman, 70, was named the honorary batgirl by the New York Yankees for a game against the Los Angeles Angels at Yankee Stadium, June 28, 2021. (Sarah Stier/Getty Images)

(JTA) — If Gwen Goldman had been named a batgirl for the New York Yankees and not been given the honor of throwing out the first pitch, it would have been enough.

A retired social worker from Westport, Connecticut, Goldman, 70, got to be a batgirl at a Yankees game Monday night, 60 years after the team turned her down because she was a girl.

General Manager Brian Cashman proffered the invite after hearing that she had been rejected for the position in 1961. Goldman still has the letter she received that year from then-GM Roy Hamey, who explained that “a young lady such as yourself would feel out of place in a dugout.”

This week, Goldman not only got a turn in the dugout, but threw out the first pitch, wore the classic Yankee pinstriped uniform and met the players.

“It just kept coming and coming,” she said of the honors, adding “dayenu,” the Hebrew word meaning that just one of the gestures would have been sufficient. PJC