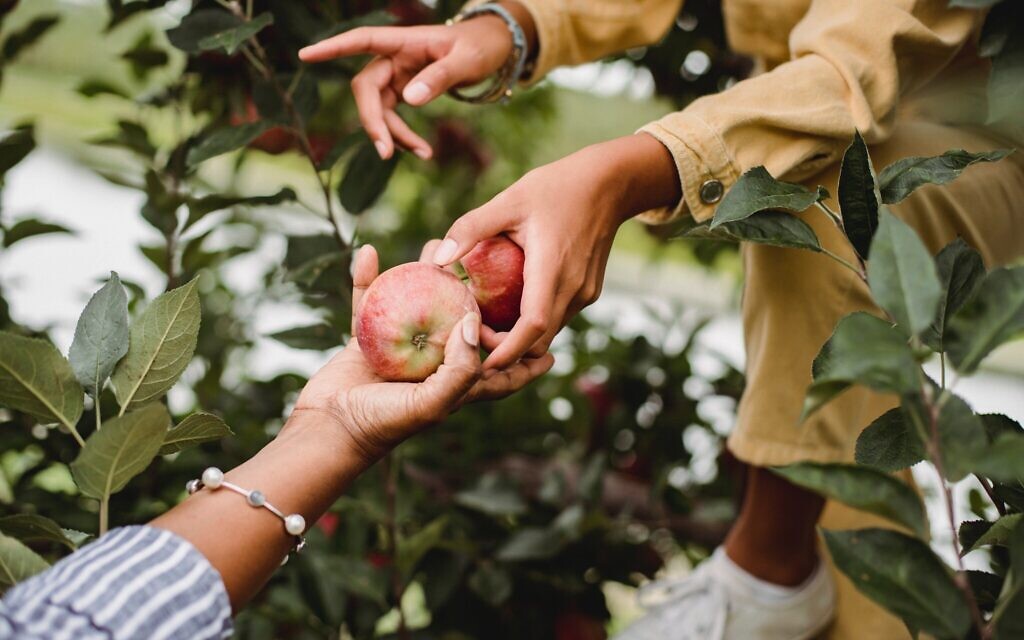 To harvest or not to harvest?

As COVID-19 stretches to the end of its second year, that may be the question among area Jews who want a bite of a fresh apple to go with a spoonful of honey on Rosh Hashanah, which starts at sundown on Sept. 6.

The Greater Pittsburgh area has answers to both questions, with family-owned orchards offering “pick-your-own” experiences for those who care to venture outside, and the Jewish Federation of Greater Pittsburgh serving up a more virtual celebration.

Apple picking season started last week at Simmons Farm, which, this fall, also offers pumpkin and fresh flower picking, according to Scott Simmons, whose family’s business has been selling farm-grown goods in the South Hills for more than 100 years. It’s been located in its current spot in McMurray for the past 75 years.

Right now, what’s available for picking are Ginger Golds — which “have a nice, sweet flavor,” Simmons said — and Dandy Reds, a cousin of the MacIntosh. The farm’s most popular variety — Fuji apples — are not currently being offered for picking.

In the North Hills, there’s Soergel Orchards — but that might be a better option in late September, said Eric Voll, the company’s vice president.

Soergel’s recently wrapped up its strawberry picking season and expects to have 12-to-14 varieties of apples for customers later next month — just keep an eye on its website.

“The selection will vary day to day, of course,” Voll told the Chronicle. “But people will be able to get out and enjoy their weekend here.”

In Monongahela in Washington County — about 15 miles from downtown Pittsburgh — the apple picking season runs for all of September and October at Triple B Farms, another local favorite. The farm, which bills itself as being “worth the drive since 1985,” also offers pumpkin picking, children’s entertainment and hayrides. Again, though, check the website for selections, or sign up for farm text notifications on the website.

Triple B Farms will be hosting some members of the local Jewish community when Temple David in Monroeville sponsors an apple picking event there on Sept. 26, with a light lunch planned for 11 a.m., according to the congregation’s website.

For those not comfortable with mingling outdoors, the Jewish Federation of Greater Pittsburgh has your number. Its 11th Annual Apples & Honey Fall Festival will run from Aug. 22 through Sept. 5, and will be mostly online or hybrid. This year, the festival will feature holiday-themed arts and crafts, videos and songs, and — if your child provides a sketch or coloring page — free ice cream from Baskin Robbins in Squirrel Hill.

“There’s online activities and recipes and other things about the holiday,” Federation spokesman Adam Hertzman told the Chronicle. “We were not able to do something in person this year because of COVID, so we wanted to do something virtual that families could do at home.”