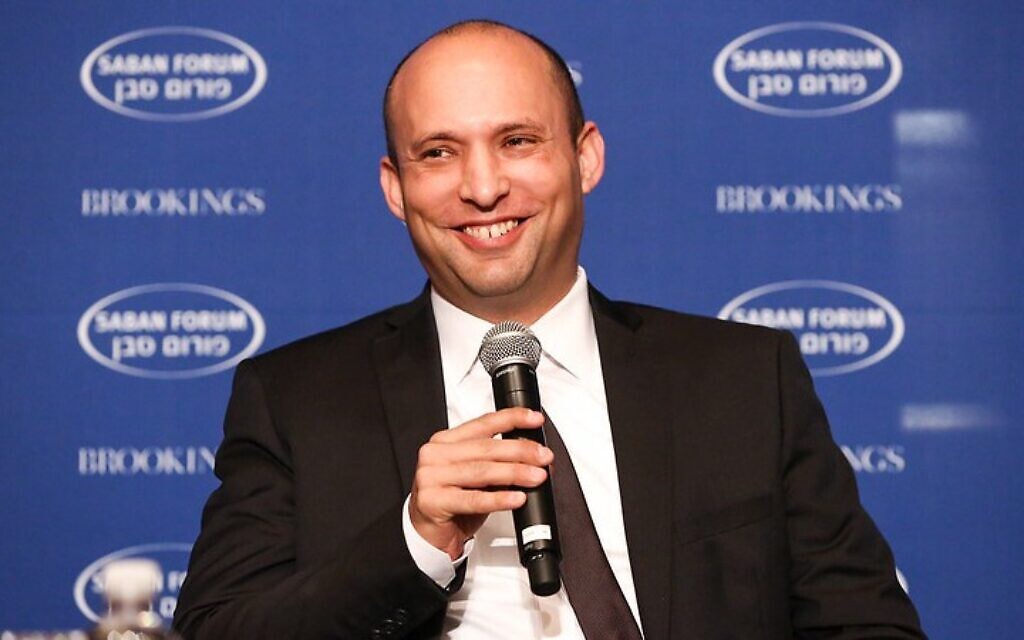 Naftali Bennett is serving as the 13th and current prime minister with a coalition government. Photo by Photo by Ralph Alswang from Brookings Institution, courtesy of Flickr.com

Israel’s 36th government is a coalition of the courageous. Each leader who has led his or her party into this strange and unwieldy government has taken a risk. The hard left Meretz has empowered the hard right Yamina, and Yamina has enraged much of its base by partnering with Meretz. Yisrael Beitenu, which not long ago accused Arab Israelis of treason, has embraced the Islamist party, Ra’am, as a coalition partner; and Ra’am, whose founding charter calls Zionism racism, has joined a Zionist government.

Among the leaders of this coalition, none has been more self-sacrificing than Yair Lapid. Though Lapid was the senior politician within the anti-Netanyahu coalition and head of its largest party, he deferred to Benny Gantz, who seemed the more likely to defeat Netanyahu. And now he has deferred to Naftali Bennett, leader of one of the coalition’s smallest factions. In so doing, Lapid has embodied the meaning of leadership and love for Israel, restoring to our politics its lost nobility.

Two Israels were on display at the Knesset swearing-in ceremony for the new government. There was the Israel of desecration, MKs shouting, faces contorted with hate, trampling on the dignity of the state as they refused to allow the prime minister-designate to speak at his own inauguration. And there was the Israel of Naftali Bennet and Yair Lapid, speaking with passion and reason and self-control as they presented their coalition of healing.

After years of officially inspired campaigns of hatred and divisiveness, contrived to serve one man’s political needs, we have the most diverse government in the country’s history. After the worst violence between Israeli Arabs and Israeli Jews since 1948, we have the nation’s first Jewish-Arab coalition.

Can this coalition last? Given its bare majority and inner contradictions, the odds aren’t brilliant. And yet even if it doesn’t survive its term, it has already won.

This government will be in a constant struggle for balance among its radically disparate components. There will be frustration on all sides as cherished agendas are stalemated and thwarted. Critics will accuse it of being a government not of national unity, but of paralysis.

Yet the search for balance needs to be the heart of the Israeli project. Paradox is the inevitable result of the ingathering of the Jews home from a hundred exiles, with all our contradictory visions and fears and notions of the meaning of Jewishness and a Jewish state. And then factor into this mix Israel’s Arab citizens who are not part of our national mythos of ingathering, whose Israeli identity is at best tenuous, and the search for equilibrium becomes nearly impossible.

We are by necessity a coalition system. Only a coalition can attempt to hold the paradoxes of Israeliness. This government will be our most radical experiment in the restraint and humility that is the heart of coalition-building.

The implicit question driving this coalition is: What holds us together? That question has become increasingly urgent in recent years, as the two foundational elements of our identity — the Jewish and democratic nature of the state — are placed in increasing tension. Once, not so long ago, most Israelis agreed that there could be no Israel that didn’t represent the Jewish people and the continuity of Jewish history and that didn’t, at the same time, aspire to fulfill the promise of our Declaration of Independence for full equality for every citizen.

Today, thanks in no small measure to the previous government, that basic assumption of Israeliness can no longer be taken for granted. The task of this government is, above all, to restore our sense of commonality, by affirming and defending Israel’s Jewish and democratic identities.

The last years of Netanyahu’s reign were a glimpse into the possible unraveling of Israeli society. This government’s contradictions are the source of its hope. PJC

Yossi Klein Halevi is a senior fellow at the Shalom Hartman Institute, where he is co-director, together with Imam Abdullah Antepli of Duke University and Maital Friedman, of the Muslim Leadership Initiative (MLI), and a member of the Institute’s iEngage Project. This piece first appeared on The Times of Israel.