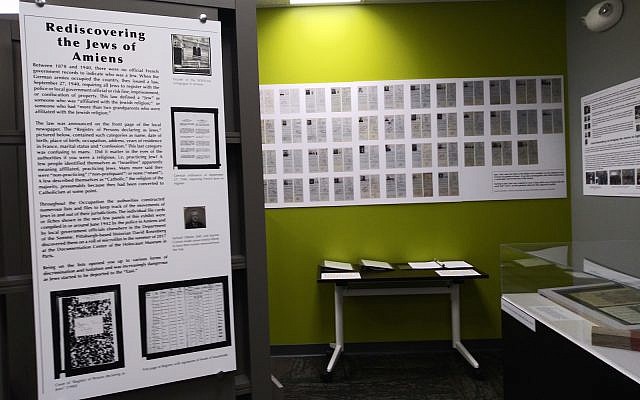 David Rosenberg's exhibit, "Who Is A Jew" (seen here at the Holocaust Center of Pittsburgh) now has a virtual home online. Photo by David Rullo

David Rosenberg’s exhibit, “Who Is a Jew? Amiens, France 1940-1945” can now be viewed online at jewsofthesomme.com/exhibit.

The exhibit is organized around a group of identification cards discovered by Rosenberg in the summer of 2017. The cards along with letters and textural information on the site help to tell the story of the Jews of Amiens, France after the Nazi occupation of the country.

Rosenberg, a historian and former archivist at the University of Pittsburgh, premiered “Who Is a Jew” at Temple Emanuel of South Hills in 2019. It has since been exhibited in various locations, including the Holocaust Center of Pittsburgh, throughout the United States and France.

The source material for the exhibit and Rosenberg’s research, totaling 34,754 pages, was added to the Departmental Archives of the Somme on June 15. The records are all related to the persecution of the Jews of the Somme during the Nazi occupation.

The records were previously only available in the National Archives in Paris. The South Hills resident said he made it his goal to have the records “placed in Amiens, where the bulk of the actions documented took place.”

Rosenberg was named a Chevalier dans l’ordre des Arts et Lettres (Knight in the order of Arts and Letters) in 2013 by the French government for his work. PJC