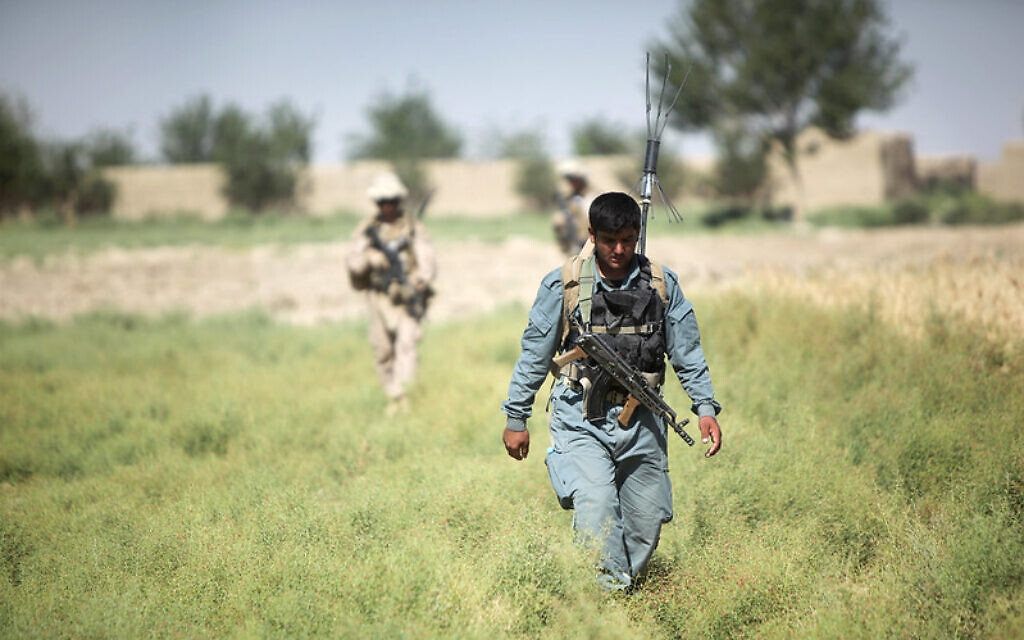 Despite spending years training Afghan security forces, the U.S. trained forces turned over Kabul and other cities to the Taliban when the U.S. pulled out of the country. (U.S. Marine Corps photo by Cpl. Kenneth Jasik)

The chaos of the past few weeks as the United States withdrew from Afghanistan became personal for me on Aug. 27.

A little over a week after my most recent blog post was published, I received an email through the contact form on the Chronicle/Times of Israel website that put an “electronic” face to the true human toll the Taliban takeover and American withdrawal are having on millions of people.

The email came from an Afghan SIV holder. I know his message was representative of how thousands of Afghans who worked with us over the past two decades feel.

I was in utter shock. I have no idea how he found my blog, and I have not asked.

The sense of fear in the email was palpable (to protect his identity and safety during the internet age we live in, I will not reveal his name or other personal details). He wrote about how the Taliban was trying to kill him and his family because he worked with the U.S. military. He said he tried multiple times to get to the Kabul airport but was unable to get through the crowds to even try to make it to the gates.

The gentleman included the name of his supervisor during his time working with the military. I immediately searched the officer’s name and scoured the internet for a way to contact him.

And I found him.

Now a college professor, I reached out to ask him about the individual and if he knew him. He affirmed he did and gave some background on the work he did with American forces. The man’s work “saved lives… without question,” in the words of the retired army lieutenant colonel.

I told the man I was in contact with the colonel, who was also trying to use his connections to get the man and his family into the airport. He sent me the letter the colonel wrote on his behalf attesting to his identity so he could be admitted to the airport. It detailed his service and mentioned the certificate of appreciation he received from the U.S. Army.

I spent the following hours reaching out to anyone I thought could be of assistance. I called and emailed the offices of Rep. Mike Doyle and Sens. Bob Casey and Pat Toomey, speaking to a Toomey staffer Friday afternoon and Doyle staffer Monday morning to give them the man’s information. I messaged someone I know who works at the Pentagon. I tried to connect with nonprofits working on this very issue. I sent a message to the State Department but got directed to a page that was a dead end with no information.

Over the last several days, I have remained in constant email communication with the man, giving him updates on any information I got from speaking with the congressional staffers or news about what was going on near the airport.

The last U.S. military plane took off from Kabul a minute before midnight local time on Aug. 31. More than 120,000 people were evacuated on U.S. and coalition flights over the past few weeks, a genuine achievement. Sadly, the facts on the ground show that the operation was far from a success.

Over 100 Americans who want to leave are still in Afghanistan. Tens — more likely hundreds — of thousands of Afghans (and their families) who worked with us and other NATO countries were left behind. Countless other at-risk Afghans are now at the mercy of the Taliban.

The hero who emailed me was left behind. The State Department never contacted him. He did more for this country than most of us ever will. He has his SIV documents. He is being hunted down by terrorists. It didn’t matter.

On the afternoon of Aug. 30, I sent the man — who I only know through words on a screen — an email saying the last U.S. flights had left.

The Biden Administration, State Department, and Pentagon have all said that while the U.S. military mission in Afghanistan has ended, America’s commitment to the people there who helped us remains. But does it really?

This country failed to keep the promises it made to thousands of people. What is the plan to help them now? What is the United States going to do to get this man, his family and others like him out? Ask the Taliban pretty please with a cherry on top?

I know there was nothing more I could realistically do. Yet reading desperate emails asking for help fills me with sadness and shame. I feel sick and like a failure.

Hundreds of thousands of Americans served in Afghanistan and 2,461 heroes made the ultimate sacrifice. Besides members of the military, veterans, and Gold Star families, though, was Afghanistan really something most of us thought about until a few short weeks ago? The answer is clearly no.

In the two decades since 9/11, the war has largely been far from us, literally and figuratively. As a society, we have focused more on the development and evolution of the iPhone than a seemingly far off conflict in a country few of us could even point out on a map.

I like to think I am relatively knowledgeable about global affairs. I studied political science, international relations and history in school. Yet even for me, the war and its catastrophic ending were not something I felt personally beyond just being a civically engaged American who has grown up over the past 20 years.

That all changed with an email from a man this country left behind. PJC

Brian Burke is a Pittsburgh native and 2019 graduate of the University of Pittsburgh, where he studied political science, history, and Jewish studies. In college, he was involved with Hillel and the David Project, holding several leadership positions including president of the Pitt Hillel Jewish Student Union in 2018.