Helen Bayer and Jon Prince forged a deep friendship after meeting at the Food Shoppe in Squirrel Hill. Photo provided by Jon Prince.

Shoes, and the unexpected kindness of strangers, played fortuitous roles in the life of Helen Bayer, a local Holocaust survivor who died earlier this month.

After a forced death march from the Buchenwald concentration camp in Germany to Czechoslovakia during the waning days of World War II, a Czech soldier noticed Helen and her sister Mary had only one pair of shoes between them.

The soldier gave the sisters a pair of his son’s shoes, then hid the girls on his farm until they were able to find shelter at a displaced persons camp run by the Allies. It was there that Bayer met her husband, Jim, who worked as an administrator at the camp. After they married, they moved to Wilkinsburg near Pittsburgh.

Almost 75 years later, after the death of her husband and in failing health, the lack of shoes once again played a pivotal role in Bayer’s life. One day, after Bayer ordered food to be delivered from the Food Shoppe in Squirrel Hill, the owner, Joya Burkholder, saw that Helen was in bare feet, outside, during the cold of a February winter. Burkholder called the Jewish Association on Aging. With the assistance of the JAA, Bayer’s niece, Anita Stern, was able to move Bayer into Weinberg Village.

When Stern, who lives in Ontario, Canada, came to visit Bayer and the two returned to the Food Shoppe to thank Burkholder for her help, they happened to meet Jon Prince standing outside the store. Prince had stopped at the deli to pick up sandwiches with his wife, Jennifer Poller, and their two children, Julius and Jordan.

“I think it was Louis Pasteur who said, ‘Chance favors a prepared mind,’” Prince said as he recalled his first meeting with Stern and Bayer. He had recently returned from a Classrooms Without Borders tour of several Holocaust sites in Poland. Bayer grew up in Poland and had spent time in the Warsaw Ghetto before her eventual confinement in both Ravensbruck and Buchenwald concentration camps.

Prince, Stern and Bayer began chatting. Bayer’s accent was familiar to Prince as his grandmother also grew up in Poland. They discussed Bayer’s past, and when Prince heard that Stern lived in Canada and that Bayer was without family in Pittsburgh, he offered to visit her at Weinberg Village.

After Prince gave Bayer his business card, said he would be in touch and drove away, Bayer told her niece, “He’s never going to come and see me,” Stern recalled.

Although Prince did have misgivings about visiting a nonagenarian he happened to meet in a store parking lot, he credits his wife with insisting he keep to his word.

Bayer, who was suffering from the early stages of dementia, probed the 54-year-old about his intentions, Prince said.

Prince recalled thinking to himself, “What have I got myself into?”

He told Bayer what he really wanted was a cup of coffee. Bayer responded, “Me too.”

From that point forward, coffee was a focal point for the pair.

“She was very particular about her coffee,” said Prince. “She had two creams and two sugars, and I got my coffee black. And after, we just started talking.”

For next three and a half years, Prince, or a member of his family, never missed a Tuesday visit with Bayer until her death on Nov. 11. 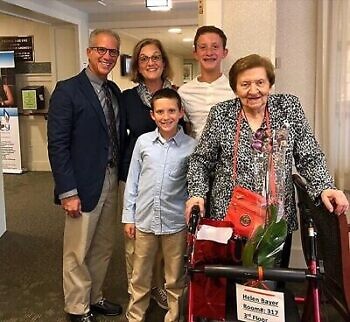 Jon and his family, Jennifer, Jordan and Julius visited Helen on Yom Kippur.
Bayer enjoyed following fashion, and during their first visit together, Prince noted she looked very regal. He began bringing her fashion magazines that they would look at together while drinking coffee and chatting.

Prince is the president of CandyFavorites.com, a wholesale candy business begun by his grandfather in 1927, known then as the McKeesport Candy Company. Coincidentally, Bayer had a sweet tooth, which Prince helped satisfy by bringing her candy. He also supplied treats for a Valentine’s Day party at the care home. 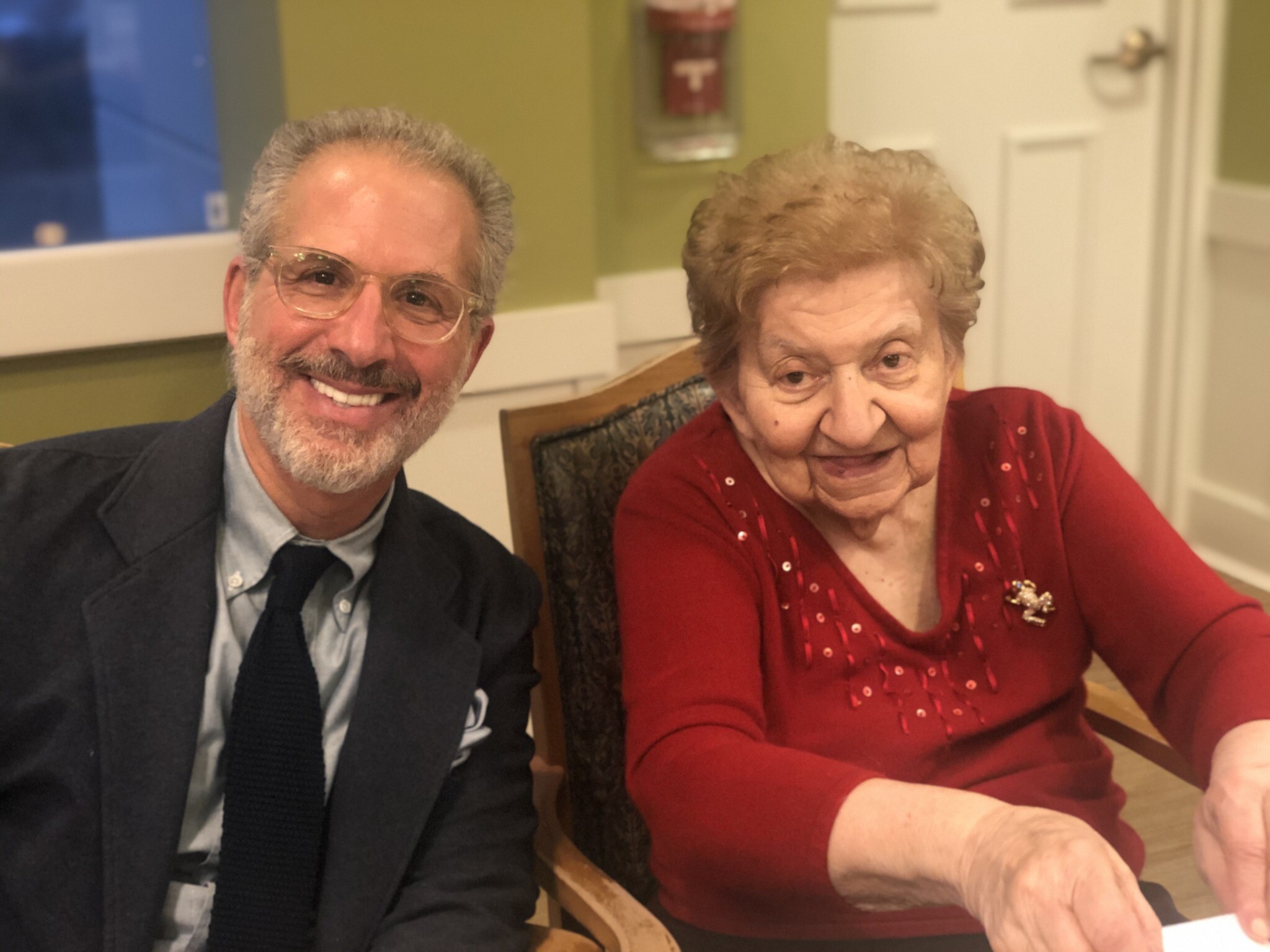 Jon and Helen celebrated Valentine’s Day. On his visit, he made sure Helen’s entire floor had chocolate. (Photo by Jon Prince)
When it came time to celebrate Helen’s birthday, Prince made sure Bayer’s love of chocolate was considered.

“I wanted to celebrate with the best party I could,” Prince said. “I reached out to [JAA staff] and I said, ‘You know, we need to get a cake for Helen. Helen loves chocolate. And she loves sweets. Let’s get a cake for everyone that’s going to be in the room. I mean, make this a serious party.’ We had balloons and we had an edible bouquet and a huge cake. It was a pretty fun party.”

As the time passed, the two got closer. Prince signed Bayer up for trips to the symphony and even accompanied her on medical visits, all while keeping in touch by phone with her niece in Canada.

When COVID-19 necessitated visits to be conducted through glass, the pair continued to meet on Tuesdays, albeit without the usual cup of coffee.

“They wore gloves all the way up to their arm pits and were allowed to hold hands,” Seiss said. “She was always so happy to see him and this was the last time. She grabbed hold of him and wouldn’t let go.”

Bayer died shortly after that final visit while Prince was on vacation with his family. He returned home early and helped coordinate the funeral with his friend, Rabbi Mordy Rudolph, executive director of the Friendship Circle. Prince even helped the family watch the funeral in Canada via Zoom.

Prince recalled his friendship with Bayer saying it was basheret, the Yiddish word for destiny or meant to be, rather a coincidence. He said friendship with a senior citizen — like the one he shared with Bayer — is not beyond the reach of others.

“It’s not daunting if you’re willing,” he said. “Anyone can do this.” PJC

Films
Coming-of-age story filmed at JAA
By Justin Vellucci
“The goal of our event is to introduce the film to those who will benefit from its message of self-discovery, especially with the intergenerational connections it makes.”
Jewish journalism
Chronicle selected for Jewish Journalism Fellowship
The Chronicle is one of five media outlets participating in a year-long program to learn ways to help better serve its readership.

Getting Good at Getting Older with Rabbi Laura Geller

March 2 , 9:15 am - 10:00 am
Submit an Event
Pittsburgh Jewish Chroncle
Weekly Edition
Free to Your Inbox
The email is either missing or invalid.
By signing up, you agree to our terms You hereby accept The Times of Israel Terms of Use and Privacy Policy, and you agree to receive the latest news & offers from The Times of Israel and its partners or ad sponsors.
PJC DIGITAL EDITION