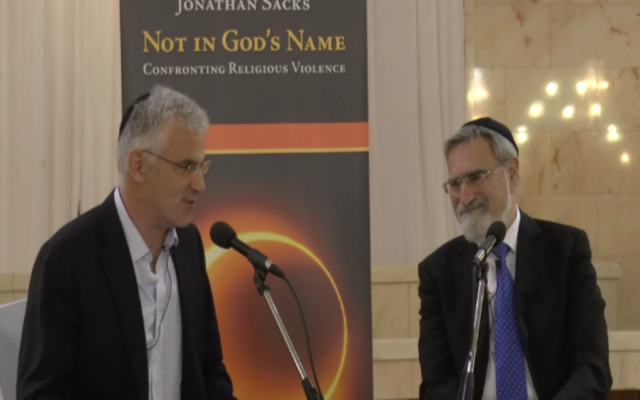 The position of Israeli ambassador to the Court of St James’ comes with a number of perks. But perhaps none was more precious to me than the regular appointment I would have, as Israel’s envoy, with the chief rabbi. For the first three years of my posting, this meant a regular monthly session with Rabbi Jonathan Sacks.

Rabbi Sacks had a keen interest in events in Israel. He had a deep personal connection himself (he would joke that when he visited during the Gulf War he was the only person who followed the government’s instructions to shave off his beard so he could wear a gas mask), but he also wanted to be able to help his rabbis be effective in connecting their communities to Israel. He was eager to be briefed on the current security situation, the political intrigues and the state of Israel-UK relations.

I had a rather different agenda. Here was an intellectual Jewish giant, who had singlehandedly created a corpus of Jewish thought unprecedented in modern times. He had energized thinking within the Jewish world and made Jewish ideas a force to be reckoned with in wider society. I was astonished at the range of non-Jewish leaders I would meet with, from archbishops to public intellectuals, who would confide what a treasured influence his writing had been on their lives. With such a teacher, I thought, there has to be a better way for us to spend our time together.

I suggested to Rabbi Sacks that I would prepare briefing notes so that the business part of our meeting could be completed in fifteen minutes at most. That would leave the rest of the time for us to study together. Rabbi Sacks agreed willingly, but the truth is our earliest efforts were not a great success. He was not a natural study partner, or at least the imbalance between us made our study awkward and stilted. I suggested an alternative. Rather than study a text together, I would send him, in advance of our meeting, a list of five or six questions that seemed to me current and important. He could choose any one of them and speak freely about it.

So did I come to have the benefit of a truly wonderful tutorial. The range of his erudition was breathtaking — we would leap from the history of language to the relationship of Judaism to oriental philosophy — but the discussion was almost never disconnected from the challenges of our time. His focus was on ideas as moral forces in the real world: how do we balance our local, national, and global responsibilities; how do we navigate between hubris and humility in the face of scientific progress; how do we harness the power of faith without unleashing the darker sides of fundamentalism?

At the same time, our sessions together gave me a glimpse of a man who had embraced his public role with reluctance. On one occasion he spoke about the sin of the biblical spies, who gave a bad report on the land of Israel. They were scared, he suggested, not of defeat but of victory. If they succeeded in the battle, they would have to take on the challenge of facing the real world. As he said this, it seemed this was a fear he had known himself.

Truly one of the great public speakers and broadcasters of our generation, this was never a role he imagined for himself. I have a passion for ideas, he would say, but I’m just not a people person. It’s easier for me to speak to a thousand people than to three, he would add. If left to his own inclinations he would, he admitted, have been happy to remain in the ivory tower.

Two things I think made him change his mind. The first was his acute sense of tzav hasha’ah, the call of the times. In a largely godless age, where the voice of faith was barely heard on the major issues of the day, he recognized that he had a unique ability to redress that balance.

And the second was that he was surrounded with a remarkable group of people who cherished his strengths and appreciated his weaknesses. “I realized I needed to surround myself with individuals with outstanding people skills,” he said — and in this he was blessed. Blessed above all with his wife, Lady Elaine, who was always in his mind when he advised people with an abstract intellectual bent like his own, to marry someone “who has a bigger heart than you do”.

Alongside the legacy of wisdom and insight that he has left us, and which is more relevant today than ever, Rabbi Sacks’ life leaves us with another lesson too: With commitment and moral vision, and some help from our friends, we can become something greater than we ever thought we would be. PJC

Daniel Taub was Israel’s Ambassador to the United Kingdom from 2011 – 2015. This piece was originally published in Britain’s Jewish News.