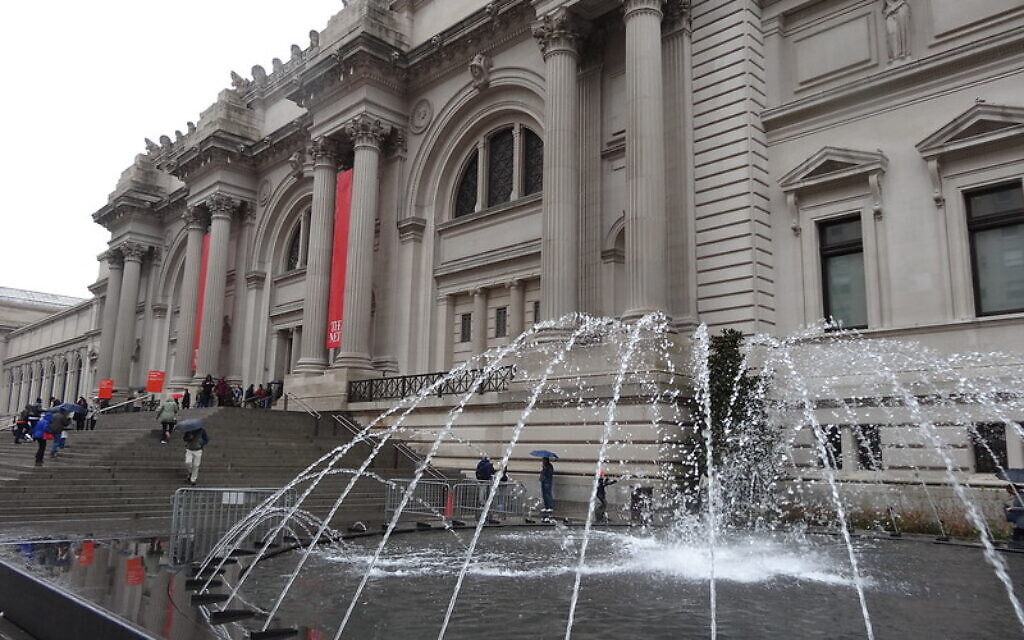 The Metropolitan Museum of Art. Photo by denisbin, courtesy of flickr.com.

We visited the Metropolitan Museum of Art for the first time in over a year, which meant I could visit an old friend. Just to the left of the grand staircase is a homely marble plaque, about the size of a placemat. It’s inscribed mostly in Greek, but there is a little Hebrew too, as well as pictograms of a menorah, a shofar and what appear to be a lulav and an etrog, the Sukkot symbols.

The inscription, in Greek, reads, “Through the providence of God I, E…s, together with my wife and my children have renovated the forecourt of the sanctuary using the gifts of God.” The Hebrew reads, “…established the house of prayer. Peace.” The plaque is described as Roman and dated 400-600 CE.

Anyone who has ever set foot inside a synagogue knows what’s going on here. The object is a 1,500-year-old version of those signs reading, “The Spielvogel Vestibule, in honor of the bat mitzvah of Rachel Spielvogel, from her parents.”

I find this incredibly moving. For as long as Jews have been building synagogues, they’ve been fundraising; and for as long as Jews have been fundraising, they have thanked donors with what are known in the trade as “naming opportunities.” It’s touching to consider that Jews have been reciting the same prayers for centuries; it’s hilarious and wonderful to imagine a synagogue administrator in a toga asking E…s for a donation in exchange for immortality. (Ironically, a crack in the marble obscures E…s’s full name.)

I thought of the plaque again when I saw a tweet from My Shul Called Life. If you don’t know the account, you should: Written by two synagogue administrators calling themselves @RogueShul, it is one of the most reliably funny satires of synagogue life on the web.

Last week they asked readers, “What’s the most outdated item in your shul?” The answers ranged from waggish (“The rabbi!”) to the obvious (the “old electronic equipment … in various storage rooms”) to the politically informed (“Brotherhoods” and “Sisterhoods” and “other unnecessarily gender-specific activities”).

No one mentioned the donor acknowledgements, which, in my shul, anyway, plaster the sanctuary walls, are embroidered on the Torahs, printed on bookplates, attached to seat backs and arranged as leaves in the lobby’s Tree of Life. This surprised me, because complaining about naming opportunities seemed to come on strong among Jews raised in the anti-materialist ’60s and ’70s. I can still remember the baby boomer in the tie-dyed kippah who told me that the only name that should be inscribed on a synagogue’s walls is God’s.

Then he probably quoted Maimonides, who said the highest form of charity is giving anonymously. Or maybe Rabbi Eleazar: “A man who gives charity in secret is greater than Moshe Rabbeinu.”

Of course, I could have quoted another bit of Torah right back: “im ein kemach, ein Torah; im ein Torah, ein kemach.” “Without bread there is no Torah; without Torah, there is no bread.” (Ethics of the Fathers 3:21) I take that to mean that everything costs money, even the privilege of attending a synagogue. The same goes for synagogue dues and High Holiday tickets. Maybe you consider them gauche, but somebody has to pay for the heat, the lights, the bricks and the mortar (or, in the case of the Romans, just the bricks and the mortar).

Giving the donors credit — and a stab at posterity — seems a fair trade-off.

There is actually a Jewish literature about whether or not to publicly thank donors, summarized in a 2008 responsum by Rabbi David Golinkin. Golinkin summarizes the opposition to naming opportunities, including the example of Rabbi Hershel Matt of Troy, New York (1922-1987), who banned synagogue plaques to prevent “the cheapening of a precious mitzvah by holding out the incentive of attaining glory, credit or publicity.”

In response, Golinkin notes that 500 such inscriptions have been discovered in ancient synagogues in Israel and the Diaspora.

His conclusion: The “normative Jewish practice for some 2,200 years has been to record gifts and to inscribe the names of donors because this serves as a memorial to the donor and encourages others to give tzedakah.”

One danger of naming, not mentioned by Golinkin, is that the donor may suffer a blow to his or her reputation, and you find yourself one Yom Kippur seeking forgiveness in the Bernie Madoff Chapel. (To get meta for a moment, the label on the donation plaque at The Met says it is a loan from the collection of Judy and Michael Steinhardt, philanthropists whose names adorn a raft of Jewish and other institutions, which got dicey after Michael Steinhardt was accused by women of making inappropriate sexual remarks.) But there’s a fix for that, as the Sacklers are learning.

I for one like how synagogue plaques and whatnot preserve the history and continuity of the community, starting with the old names (Hyman! Peshe! Lucius Domitius Abbas!). The name on our sanctuary reminds me of the sweet couple who sat in the second row all those years. Or I’ll see a prayer book donated in honor of some kid’s bat mitzvah, realize I was actually in the pew that day, and then remember that she just had a baby.

Andrew Silow-Carroll is the editor in chief of The Jewish Week, an affiliated publication, where this piece was first published.