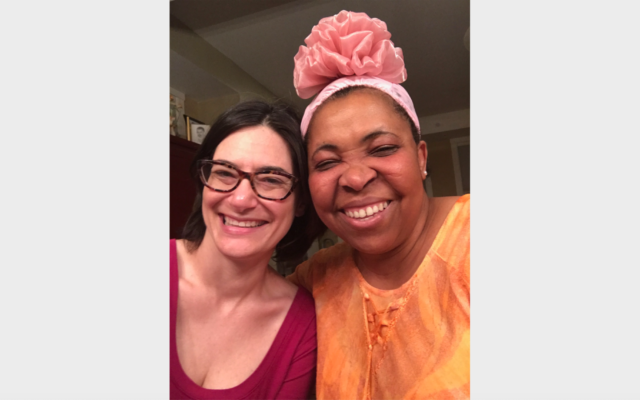 When Julie Arnheim and Zita Iwuoha met, it was friendship at first sight.

“The minute our eyes locked, there was a sparkle that was infectious,” said Arnheim, who was helping as an Arbonne makeup consultant with makeovers for 16 nurses, including Iwuoha, at Give It Forward Together’s fashion show in December 2018. “It was a ‘I really need to know this woman.’”

So Arnheim invited her over.

Iwuoha loved Arbonne’s products so much that she joined Arnheim’s team. And when she told Arnheim about her nonprofit, Zita’s Healthy Beginnings, which works to reduce maternal and infant mortality, Arnheim said, “Well if you’re on my team, I’ll be on your board.”

The two have supported each other since.

On Feb. 12, Arnheim woke up feeling sick. Days later, she had surgery for a brain tumor.

Iwuoha and her sister Angela were there.

“I never opened my eyes without one of them in the room with me,” said Arnheim, who is now in remission.

And when Iwuoha’s mother passed away in early March, Arnheim went to her funeral.

“One of the things that being raised in the Jewish community taught me is you show up for your friends’ families’ funerals,” she said.

Showing up and helping out is a lesson Iwuoha grew up with, too. She was raised in a Nigerian village with about 300-400 families, where everyone knew everyone, spoke the same language and helped each other. When her father slaughtered a goat or a chicken, he shared it with the village.

“I grew up knowing that I am my neighbor’s keeper,” said Iwuoha.

In 2002, she moved to the U.S. — first Texas, then California and then Pittsburgh. But she hasn’t forgotten her roots.

Iwuoha is Igbo, native to south central and southeastern Nigeria, and Equatorial Guinea. Some Igbo identify as Jewish — and some, like Iwuoha, see themselves as both Jewish and Christian. There’s disagreement about Igbos’ Jewish roots: Some argue that Igbo are descendants of the ancient Israelites, while others say Igbo adopted Judaism in the 1900s.

The Igbo sought independence in the 1960s amid political, ethnic and religious tensions, conflict over oil and other issues. After the 1966 anti-Igbo pogrom, eastern Nigeria seceded, declaring itself the Republic of Biafra. War broke out.

According to Iwuoha, there’s still conflict — and family members in Nigeria have sent her photos.

When she shared a photo with Arnheim that showed women looking through slats of what appeared to be a cattle car, Arnheim said, “Oh my God, that’s like a Holocaust picture.”

“As an American of Jewish German descent and Lithuanian descent, where my ancestors escaped pogroms and the Holocaust, and some of my ancestors did not escape the Holocaust, I feel that Hashem has directed me, has given me the gifts to speak up and help advocate and bring awareness,” she continued.

Arnheim connected with the University of Pittsburgh’s African Studies Program, which agreed to host an online event titled “What You Don’t Know is Happening: Voices from Nigeria” under its preexisting “Let’s Talk Africa” series. The program features five panelists, including Iwuoha and Arnheim. The date of the program, Nov. 10, was chosen intentionally: Kristallnacht was Nov. 9-10, 1938.

“By keeping the memory of the Holocaust alive even while its last survivors are passing away, we hope to help prevent other similar catastrophes, such as what is happening in Nigeria,” wrote Irina Livezeanu, the director of the Jewish Studies Program, in an email.

“Talking about Kristallnacht can help us understand human suffering and the dangers of becoming silent bystanders,” wrote Macrina Chelagat Lelei, director of Pitt’s African Studies Program, in an email. “If we stay silent and do not condemn acts of violence against others, then we risk having such events occur again.”

“As human beings with shared values, we all have to play a role in advocating for change that will make people’s lives better,” she added.

Arnheim and Iwuoha hope to do just that. PJC