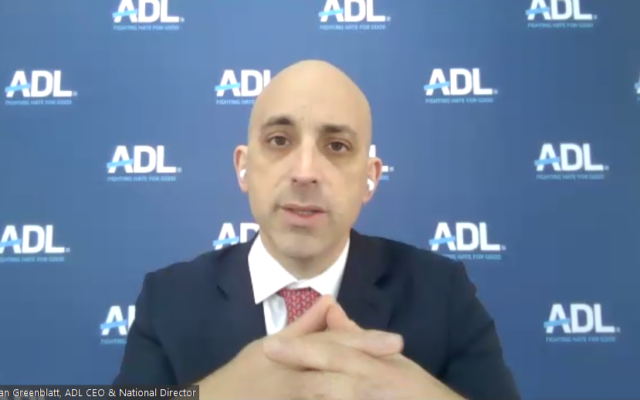 ADL CEO Jonathan Greenblatt spoke about the organization’s 2020 audit of antisemitic incidents titled "Fighting Hate from Home: 2020 Audit of Antisemitic Incidents & the State of Antisemitism in the U.S." Screenshot by David Rullo.

Despite the COVID-19 pandemic, and months of restricted activities, the number of antisemitic incidents in the United States remained high in 2020, according to the Anti-Defamation League’s annual audit on antisemitism.

For the second year in a row, Pennsylvania had the fifth highest number of antisemitic incidents in the nation, behind only New York, New Jersey, California and Florida.

For purpose of the ADL’s audit, antisemitic incidents were classified in three broad categories: harassment, vandalism and assault. In total, there were 1,242 harassment incidents, 751 vandalism incidents and 31 assaults reported cross the nation.

COVID-19, which led to Jews and other minorities being scapegoated for purportedly spreading the virus, impacted the findings, Leipzig said.

The pandemic changed life as we know it, but it didn’t stop hate, according to ADL CEO Jonathan Greenblatt, who noted that the statistics showed an average of more than five antisemitic acts per day for every day of the year.

“Antisemites are elusive,” he said. “Anti-Jewish hate is often thought of as the oldest hatred. It is really the most persistent virus because it adapts and mutates and finds new vulnerabilities to exploit for spreading its toxin.”

Zoom bombing — where unwanted intruders interrupt a video-conference program — is a new medium for antisemitism, Greenblatt said, and is partly responsible for a 40% increase in incidents at Jewish institutions compared to 2019.

While 2020 saw a 10% rise in antisemitic vandalism, assaults dropped 20% from 2019, and there were no fatalities, according to the ADL.

“While the absence of similarly deadly incidents in 2020 is encouraging, we can’t and will not let our guard down,” Greenblatt said. “As we saw during the recent insurrection at our nation’s capital on Jan. 6, where antisemitic slogans and racist symbols were omnipresent as those militants marauded through our Capitol…extremist threat in this country remains high.”

Stay-at-home orders, a reduced number of daily commutes and school closures likely affected the number of antisemitic incidents, said Oren Segal, vice president of the ADL’s Center on Extremism. There were 161 reported antisemitic incidents at non-Jewish K-12 schools in 2020, a 61% decrease from 2019. Classes were Zoom bombed 22 times with antisemitic language and swastikas.

American colleges and universities experienced 128 antisemitic incidents, Segal said, a 32% drop from the previous year.
He stressed the importance of reporting all occurrences of hate.

“The way we can inform policymakers and advocate for better policies and practices is through good reporting,” he said. “The better the data, the better prepared we will all be to strategize about ways to mitigate antisemitism and all forms of hate.”
In Pennsylvania, there were 101 antisemitic incidents reported last year, a 7% decrease from 2019, but still the third highest year on record for the commonwealth.

Allegheny and Lehigh Counties each reported five incidents, behind only Philadelphia (39), Montgomery (17) and Delaware (8) counties. In total, Western Pennsylvania reported 11 incidents in 2020.

“They’re not happening in the middle of the state where there’s not a lot of Jewish people,” noted Shira Goodman, regional director of ADL Philadelphia. Those committing acts of bias and hate are doing so against people they know, she said, which “means we have a lot of work to do.”

While Pennsylvania hasn’t had a mass antisemitic attack since the murders at the Tree of Life building in 2018, the commonwealth reported 22 antisemitic incidents at Jewish institutions, including synagogues, Jewish Community Centers, retirement homes and schools — a 120% increase from 2019 and the second year in a row that incidents more than doubled.
“What the numbers tell us is that we have to remain vigilant, and that extremism is on the rise,” said James Pasch, regional director of the Cleveland office which covers Western Pennsylvania.

Combating hate doesn’t have a simple solution, he said, noting that the ADL now conducts anti-hate programs in more than 30 Western Pennsylvania schools and will soon be hiring a community engagement coordinator for the region.

The ADL, Pasch said, will continue to work closely with the Jewish community in Pittsburgh, including the Jewish Federation of Greater Pittsburgh, area synagogues and non-Jewish leaders and government officials.