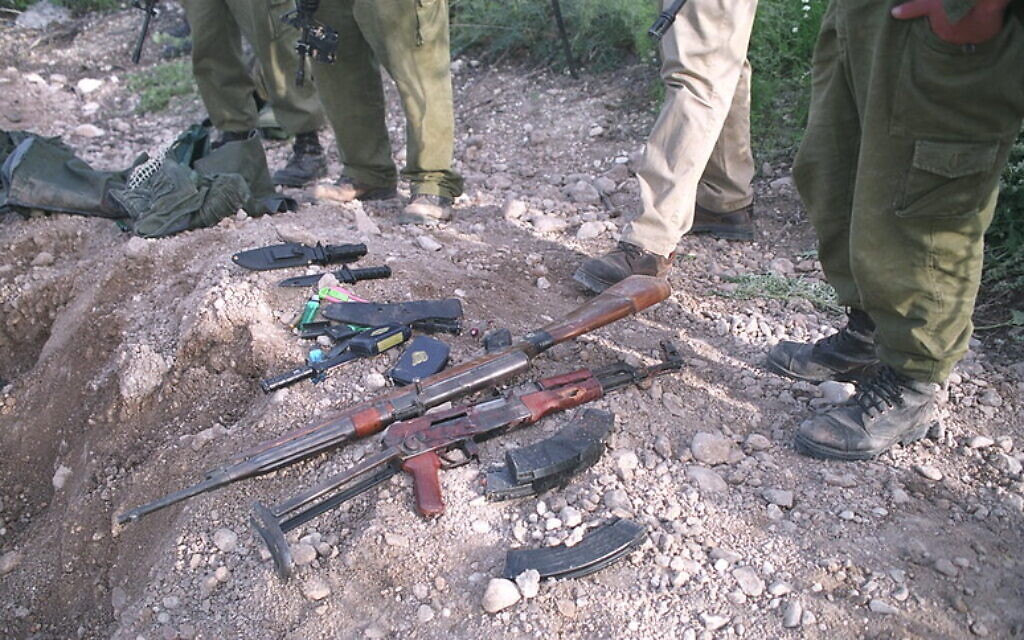 Terror Attack Averted Between Israel and Jordan. IDF forces thwarted an attempted terror attack by an armed group of terrorists infiltrating Israel from Jordan. Pictured are the weapons found on the group. Photo courtesy of Israel Defense Forces, via flickr.com

These are difficult times for Israeli society. Even though terror attacks have been a part of life in Israel over the years, the intensity of the past week still evokes strong trauma for many Israelis.

I belong to the generation of Israelis that experienced the terror attacks of the mid-1990s and early 2000s, known as the Second Intifada. These were savage, powerful attacks that left their mark on the psyche of all Israelis. The seeds of fear planted in those days sprouted and became a massive, fortified wall of anxiety, distrust and hopelessness. That was a time when parents, fearing a suicide bomb, would ask their children not to ride the same bus; a time when drivers of private cars avoided driving alongside a bus lest it blow up next to them; and a time when lunch at a cafe or shopping at the mall meant putting your life in danger.

Today, as a mother, I experience these feelings anew, but through my children. I see their fears about terrorism manifesting as a result of an overexposure to news and unfiltered information so readily available. The discourse on social media, where many get their news, rarely allows for nuanced positions, instead offering radicalized views and attitudes in the form of short and simplistic narratives. Rather than being a legitimate source of information, it serves as a medium for channeling anger and frustration that the terror situation creates.

All of this compounded with the recent painful events of the May 2021 Operation Guardian of the Walls on the Israel border with Gaza has left us with more unhealed wounds, which also are part of the bigger puzzle.

As a parent, the process we endured as a society in the wake of the Second Intifada is constantly on my mind. And from it I learned that hating back cannot be the solution for hatred. It is simply a black hole that can suck in and emit only evil, and as parents and educators we have a responsibility not to go down that path.

So, what should we do?

Following the terror attacks in the past week, Israeli society was stunned to discover that two were carried out by Israeli Arabs. Like in all countries, self-radicalization is not unique to Israel, though the frequency and intensity of these recent terror attacks are quite rare. And yet, I think there are things from which we can draw strength and encouragement: First, the historic summit held in the Negev, and the failed attempts to prevent it from taking place, are a major source of hope. Hope, not only because of the mere fact that this gathering took place, but also due to the fact that at a moment of crisis for Israel, all four Arab foreign ministers in attendance condemned the attack in Hadera. Hope, that from now on, this summit will be held annually in order to fight against extremism and terrorism in a strong alliance that will bear fruit in the years to come, in Israel and across the region.

Second, the very fact that many leaders and organizations across Israel’s Arab and Bedouin communities wholeheartedly and unequivocally condemned the Be’er Sheva attack speaks volumes. The scathing condemnation by Israeli-Arab politicians, led by Raam party Chair MK Mansour Abbas, is an important step that impacts both Arab and Jewish society. The absolute rejection of terror by the leaders of communities which the attackers came from is a significant — and, in many ways, unprecedented — statement.

Third, with all the challenges posed by the involvement of Arab citizens in terror, it is important to remember the communal affiliations of the officers involved in neutralizing the terrorists. In Hadera, one of the border policemen was a Druze. And in Bnei Brak, one of the policemen was a Christian Arab. This is of course proof of Israeli society’s shared, albeit complicated, destiny and shared hopes for Jews and non-Jews.

Finally, even amid these terrible times, there are also rays of light. Following the attack in Bnei Brak, there was a massive mobilization effort in Haredi society to get as many Haredim as possible to be present at the funeral of the Christian police officer killed in the terror attack, out of gratitude for his enormous sacrifice. Rabbis called upon their followers to attend the funeral, defining it as a “mitzvah.”

And so, when the traumas of the past come back to haunt us, it is healing to find encouragement and strength in the solidarity that we share, as well as in the places where the accepted separations of Jews and Arabs are given less expression. As such, we have a responsibility not only for the present but also for the future, to make sure that, in spite of the tensions and anxieties our children see, that we continue to focus on what is hopeful. This is the constructive role we should play. PJC

Carole Nuriel is the director of ADL Israel. This piece first appeared on The Times of Israel.