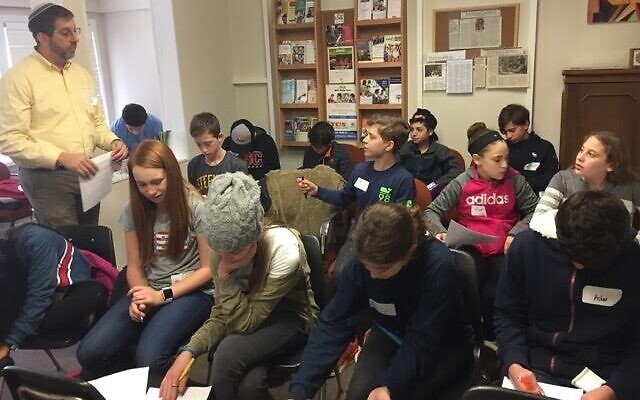 Though he participated virtually in 2021 due to the pandemic, the program’s goal was the same as in years past: teaching Jewish teens about the importance of social justice philanthropy.

“At the end, we did give out money to people in need,” said Wynn, 16, of Regent Square, a junior at Pittsburgh Allderdice High School. “So, I feel like I did a good thing.”

This year, starting at a first session on Jan. 19, a new group of teenagers answered the call to become more philanthropic. The Samuel M. Goldston Teen Philanthropy Project runs for six months at the Jewish Community Center of Greater Pittsburgh. It is funded by the Jewish Federation of Greater Pittsburgh and through a grant from Edward and Linda Goldston, in memory of their son Samuel.

The program is designed “to develop teens’ leadership skills, explore their Jewish identity and undertake meaningful giving to make changes they care about in the world,” according to organizers.

This year’s program will offer teens an opportunity to make an impact in the world by giving them $10,000 to allocate to local nonprofits of their choice. The deadline to submit proposals to the teens comes in February, said Maria Carson, director of teen leadership for the JCC of Greater Pittsburgh.

“We are open to any eighth- through 11th- graders who are interested in learning about team philanthropy,” Carson told the Chronicle. “The program is focused on philanthropy, [but] it also is really trying to encourage these teens to think about how they can be better community members … We’re using philanthropy as a lens to talk about being part of a community.”

The JCC is partnering with Honeycomb — formerly known as the Jewish Teen Funders Network — to deliver the programming to the students. The New York City-based Honeycomb bills itself as “the leading resource for educational content, resources and experiences to allow educators, professionals, parents and organizations to engage youth in strategic grantmaking.”

At the Jan. 19 session — the Goldston project’s first session for this cycle — teens and community leaders participated in Honeycomb’s “Changemakers90” program, which is a philanthropy-giving circle experience with the goal of supporting local organizations. A Honeycomb administrator came to town to participate.

“These teens will get real experience of what it means to do philanthropy,” said Wayne K. Green, Honeycomb’s executive director. “This is a great opportunity for teens to understand the needs in the Pittsburgh community … and how they can contribute to make change.”
“We’d love more people in Pittsburgh to think about what it means to give,” he added. PJC