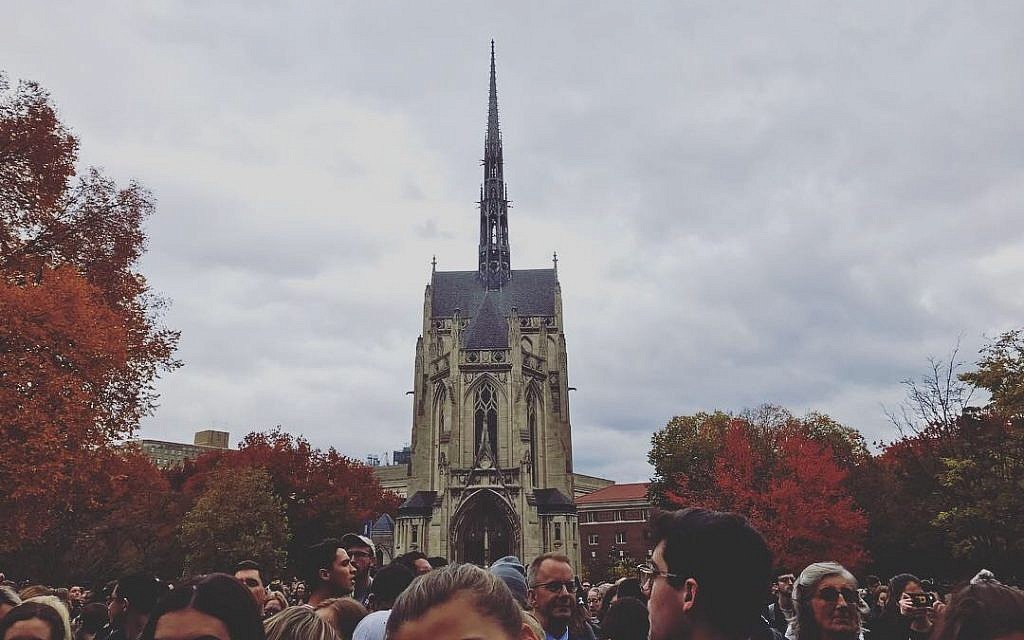 Students unite at the University of Pittsburgh one week after the Tree of Life attack. Photo by Carolyn Brodie

It’s not uncharacteristic of student newspapers to employ reporters who distort what Israel does or columnists who demonize what Israel is. That academic-associated entities once celebrated as beacons of free speech have begun to declare Zionism an unpublishable idea for Jewish students to write and too dehumanizing an idea for non-Jewish students to read, however, is a disturbing trend many young Jews have become embroiled in and one that should concern us all.

At the University of Pittsburgh, I am one such student. For me, Zionism represents what historian Daniel Gordis calls “one of the great dramas in the history of humankind.” Beyond romanticism, I consider Zionism to be the negation of antisemitism, and something every Diaspora Jew should be advocating for. But not everyone agrees.

Though I have always considered myself a Zionist, facing antisemitism as the only Jew in high school, and later belonging to Pittsburgh’s Tree of Life Congregation — the site of the deadliest attack on Jews in American history — only reaffirmed my convictions. After a yearlong stint of column writing for The Pitt News, it became clear that the paper claiming to “promote discourse on campus and inform the Pitt student body” had no intention of publishing my thoughts on issues affecting the university’s pro-Israel Jewish students.

In my first semester with The Pitt News in 2019, I wrote two Jewish-related articles with little difficulty. The following semester, the culture of the opinions desk changed. Whether it was the polarizing intensity of the upcoming presidential election or the retraction of an article referring to a “race war” that sparked campus outrage, The Pitt News did not publish a single article of mine regarding antisemitism or anti-Zionism. Despite both the editor-in-chief and opinion editor being Jewish, their apparent enmity to the very word “Zionism” prompted my resignation.

Let me explain. In September 2020, I was given the go-ahead to write an article denouncing Holocaust comparisons in political discourse. For the most part, my arguments received little pushback for the examples I provided — all except one. My insistence that comparing Zionism to Nazism was not only an ahistorical equivalency given the history of the Palestinian-Third Reich partnership, but also a deliberate antisemitic charge for obvious reasons, generating a monthlong back-and-forth with my editors for rejecting my article without reasonable explanation. After several meetings airing my grievances, the opinion editor admitted to refusing to publish my work simply because it dealt with Zionism. A few weeks later, I quit.

But really, my experiences at The Pitt News were rather mundane in comparison to what’s going on at other schools. Take McGill University, for example. According to The McGill Daily’s constitution, the newspaper must publish any letter it receives, but after two law students penned a letter condemning an anti-Israel editorial, the editorial board determined that Zionism’s falsely “colonial,” “racist” and “violent” subject matter would give a “platform to ideas which dehumanize a group of people.” With administrators threatening to pull funding, the Daily reluctantly published the initially rejected letter making the case for the existence of a Jewish state — what the editorial board would describe as “unconscionable in its dehumanization of the Palestinian people.”

Then there was Syracuse University student Justine Murray. Ultimately, The Daily Orange published her article, though she was met with the wrath of an outraged and extremist student body for defending a Zionist professor in op-eds for her student newspaper. Receiving vile antisemitic messages and even death threats, Murray’s experiences demonstrate the stranglehold some students have on what is and what is not an acceptable opinion.

Why does this happen? In recent years, progressive Jews have yearned for acceptance in political spaces that force them to choose between their Jewish identity and their political identity with many choosing the latter. At best, these progressive groups despise and are embarrassed by the State of Israel, and at worst the Jewish people as a whole — all in the name of social justice. Unfortunately, some of these Jews who embrace these movements end up being your editors.

In the broader sense, there’s an expectation on college campuses to kowtow to the woke order. It’s simply not possible for some writers to publish ideas that don’t fit the progressive mold.

Or maybe it’s not all that complex. As Golda Meir once observed, “The world hates a Jew who hits back” — and the hardest blow of all to deliver on a college campus today is to simply speak the truth. PJC

Aidan Segal is a student at the University of Pittsburgh, and a former campus fellow for the Committee for Accuracy in Middle East Reporting in America. This piece first appeared on JNS.