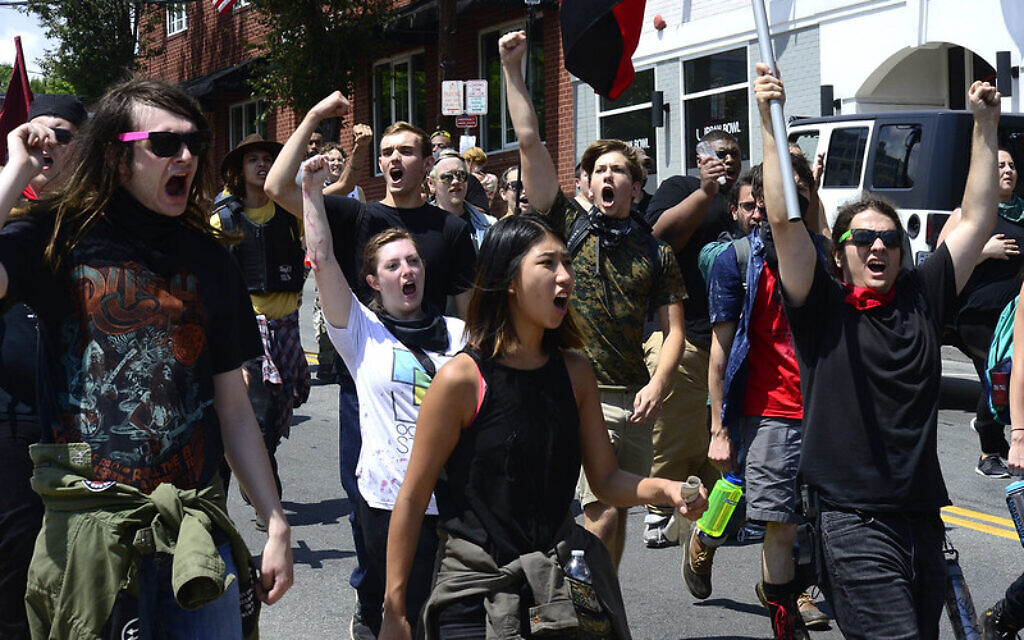 Over a thousand white supremacist neo-Nazi and neo-Confederate activists gathered for a Unite The RIght rally in Charlottesville, Virginia. Photo by Stephen Melkisethian, courtesy of flickr.com

When right-wing extremists marched in Charlottesville, Virginia, in 2017, I was a member of the synagogue that was threatened there. The white supremacists chanted “Jews will not replace us.” The great replacement lie was already in existence. But today, this lie is being embraced by an ever-growing element of our society. Tucker Carlson of Fox News has famously promoted the great replacement theory on his show. What was once owned by clearly identifiable extremists now presents itself as a legitimate, mainstream opinion. And with this, its threat to the country and its Jews has increased dramatically.

Many people in 2017 did not understand what the white supremacists in Charlottesville were saying. They were not saying that the Jews themselves would come to outnumber white Christians. While they have never considered Jews true whites, what they were outraged about then was their twisted view that the Jewish organization HIAS was engaged in a conspiracy to bring into America a large number of nonwhite, non-Christians in order to fundamentally change America. The charge was nothing more than a replay of medieval Jew-hatred.

In 2017, extremists were already saying that immigration (legal or illegal) was a threat to the America that they imagined once existed.

The idea being promoted today is that Democrats want to allow millions of nonwhite illegals into the country so that they can replace legitimate white voters and secure Democratic power for generations. This is being characterized as a coup that must be resisted. While Jews are not always mentioned as the source of this coup, it is central to the conspiracy allegations. The man who killed 11 people at the Tree of Life building in 2018 blamed Jews for coordinating the flood of nonwhite, non-Christians into the U.S. In 2019, the man who killed 23 people in a Walmart in El Paso, Texas, talked about the “Hispanic invasion” and the great replacement theory. And as reported by the Anti-Defamation League, Andrew Torba, the founder of the right-wing social media platform Gab, argued that the great replacement theory is a fact.

America was not founded on white blood or Christian principles. It was actually founded on ideas inspired by the philosophy of John Locke that rejected old notions that countries needed to be grounded in religious belief and blood. America was a bold experiment — a new idea in this history of the world — and it is still struggling to succeed. Abraham Lincoln explained this in his Gettysburg Address. He said that our new nation was “conceived in liberty and dedicated to the proposition that all men [we would say all people today] are created equal.”

In other words, our country is founded on the ideas of liberty and equality, not God and race. And we still do not know, as Lincoln put it so beautifully, “whether that nation, or any nation so conceived and so dedicated, can long endure.” Many Americans are coming to think of our country much differently than Lincoln. They have rewritten history in their own minds, believing that the country was founded on Christian beliefs and race. And although these views are not held by a majority of Americans, the great replacement theory is growing in popularity. It is especially popular among the Republican base. While it is not accepted by all Republicans, a misunderstanding of the American founding fuels the Republican base.

Donald Trump understood this and embraced religion and race in order to win the presidency in 2016. If the pandemic had not eclipsed this issue for a period of time, he would have won reelection easily. Even if Trump himself does not run for the presidency in 2024, the Republican Party will be energized by the same emotional appeals. It is both sad and ironic that Lincoln’s party has drifted so far from Lincoln’s principles.

This is why the issue of illegal immigration is so important. It’s not just about the possibility that the Democrats could lose the presidency in 2024. Even more than this, they could unintentionally enable Republicans in their attempt to redefine the animating principles of the American regime. If that happens, the bold experiment of our founders will not long endure. And the country that has for so long been a refuge for Jews will shift to a threat. As Jews, we must remain vigilant and challenge the conspirational view that Jews are behind the effort to destroy America. PJC

Solomon D. Stevens has a doctorate in political science from Boston College and is the author of the book, “Challenges to Peace in the Middle East.” This piece first appeared in the Baltimore Jewish Times.