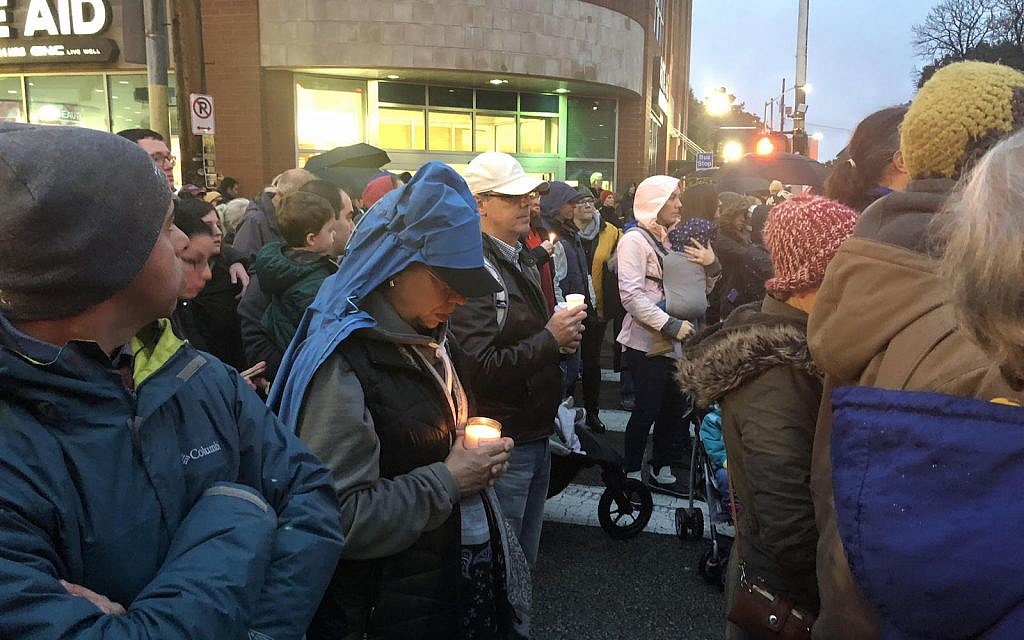 Jewish community members joined other Pittsburgh residents to mourn the loss of 11 lives murdered at Tree of Life*Or L’Simcha at the first of several vigils in the Squirrel Hill section of the city. (Photo by Jim Busis)

In the weeks and months of mourning that followed, one thing I kept hearing over and over again was a cry to “Vote!” At that moment it felt like no amount of voting or organizing could heal the pain and mourning we were feeling. Although local elections were coming up, the presidential election felt so far away and so intangible. It felt like the change in rhetoric and leadership that we truly needed was just not going to happen. At that moment I could not fully see the power of a vote.

I am originally from California and consider myself a liberal-leaning Democrat, so voting in my home state rarely makes an impact. At home, I am one of many blue drops in the bucket. There, my vote blends into the masses. After moving to Pittsburgh to attend Carnegie Mellon University, though, I quickly felt a sense of home and belonging and wanted to have a say in local politics. So, I changed my voter registration to Pennsylvania.

On the evening of Oct. 27, 2018, I went to a vigil on the corner of Forbes and Murray avenues. I stood surrounded by a sea of people feeling the beginning of a grief that would soon become a part of the person I am today. I stood in that intersection surrounded by people crying and praying and grieving just like me, but I had never felt so alone. I thought that intersection would always be tainted with this painful memory of the lowest moment of my life — the weight of death and hate making the world feel empty and silent.

A few days after the shooting, I was sitting on a bench at Rodef Shalom Congregation and a stranger gave me a blue plastic bracelet. The Hebrew words on one side loosely translated to “You do not have to heal the world but you cannot desist,” and on the other side it read, “Take one step.”

Fast forward two years to Election Day 2020. While running an errand I ended up in Squirrel Hill. Almost automatically, I drove to the Tree of Life synagogue building, parked my car and sat in the courtyard beneath the stained glass windows. As I sat in the courtyard by myself on that crisp, sunny Pittsburgh morning I noticed a row of stones sitting on the retaining wall. I counted — 10 stones. One was missing. I looked down and saw the missing stone had fallen to the ground. I picked it up and laid it with the other 10 that in total symbolized the 11 people murdered that fateful Shabbat morning. I sat back down and stared at the stones, listing off every name of each person we lost that day.

Following the shooting at the Tree of Life building, I became an agnostic Jew. Although I now identify even more strongly with my Jewish identity, I could not — and still cannot — fathom how God can exist and take 11 innocent lives. Despite my lack of belief in God, I did something as I sat in that courtyard that day that I have not done in a very long time. I prayed. But this time it was not to God — it was to every person we lost on Oct. 27, 2018. I made a promise to every single one of those people, whom I will never know, that today would be the day we would remove from power the man who allowed hate to flourish in our country.

On the evening of Nov. 3, my heart broke to see Pennsylvania on the televised electoral map fill with bright red. As I sat glued to my couch for the five long days we called Election Night 2020, Allegheny County came up on the “Magic Board” nearly every hour on CNN. But as the votes trickled in, night by night, as my mail-in ballot got counted, as my friends’ ballots got counted, we began to see our votes in action. As the red numbers got smaller and smaller, we cautiously hoped the blue numbers might have a fighting chance.

I could be poetic and say it was the hope that brought us to the moment Biden took Pennsylvania, but no, it was the votes.

This year I saw votes in action. I saw the people behind those votes who flipped the state and made their voices heard. I was not old enough to vote in the 2016 election, so I watched my country make a decision that would empower a hateful, horrible man to enter a Jewish place of worship and take 11 innocent lives. But this election, I finally had a say. I finally had a vote. My vote got a female vice president, a Jewish second gentleman, and a president who has been a longtime advocate for gun control into the White House. You cannot tell me that my vote does not matter. A small decision made years ago helped to flip an entire state.

On the evening of Nov. 7, 2020, I found myself, again, on the corner of Forbes and Murray avenues. But this time there was music blasting and bright eyes under masked smiles. Now I stood in the middle of that intersection again with tears in my eyes, but this time tears of joy. This time, the people surrounding me were dancing and singing and waving flags and holding signs because we had just elected a new president. We did that. Our state. Our county. Our votes. And although a vote cannot heal the pain and the loss that my community endured, I think back to that little blue plastic bracelet that said, “Take one step.” That is what voting is. Not a cure, but a step.

So as I stood at the intersection of Forbes and Murray on Nov. 7, 2020, I welcomed the tears in my eyes. Tears filled with hope for a new beginning. Tears filled with happiness at the knowledge that my vote mattered and my voice was heard. I finally understood the cry to vote. I voted for a candidate who stands on the platform of kindness and empathy, who understands loss and grief and who I believe will do everything in his power to care for a country simultaneously grieving and celebrating so much.

This is the moment the work begins. We have taken one step, now it is time for another. PJC

Adira Rosen is a directing student at Carnegie Mellon University’s School of Drama.