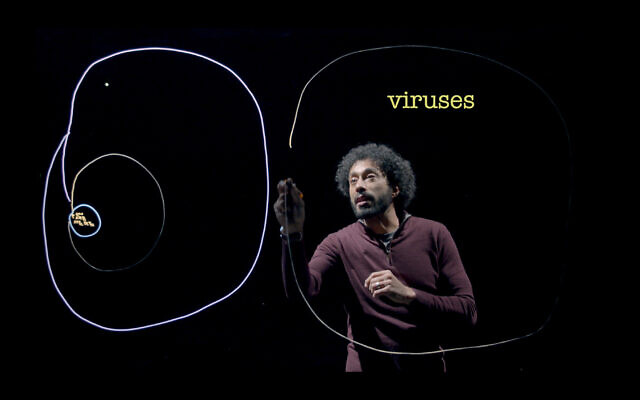 City Theatre in Pittsburgh kicked off its virtual spring season March 15 with the world theatrical premiere of California-based dramatist Lauren Gunderson’s “The Catastrophist.” The time-jumping one-man show chronicles the life and work of virologist Nathan Wolfe, Gunderson’s husband and one of Time’s 100 Most Influential People for his work tracking Ebola and swine flu. The show touches on themes of both science and Jewish faith, including the COVID-19 pandemic and the concept of tikkun olam.

In a call from San Francisco, Gunderson told the Chronicle she found herself peeling apart the layers of her husband’s life as she would any of the other multidimensional and vulnerable characters in her plays.

“To have these conversations as if I didn’t know him was really great, and it was a great part of a marriage that’s been going for — what? — 10 years,” Gunderson said. “A lot of it was the nuances I hadn’t fleshed out before: ‘What does it actually feel like to be in a lab and see these kinds of results come in?’”

Wolfe battled viruses and planned for international catastrophes long before the coronavirus, both in the laboratory and in the wider world, sometimes in places as far-flung as Cameroon. Gunderson also learned a lot about Wolfe through his Jewish family, particularly his father, Chuck, who died shortly before the couple’s first child was born.

The idea of righting the world, or tikkun olam, came first from Chuck “but Nathan embraced it in his journey to becoming a scientist,” Gunderson said.

The intimacy of the play, whose first draft Gunderson completed last summer, is a reflection of pandemic times, when the facades of daily life have come crumbling down.

There are also, however, lighter moments.

“There was the joke with [Wolfe’s] grandmother, when he became Dr. Nathan Wolfe [and she said], ‘Yeah, I’ll wait till you become a real doctor,’” Gunderson laughed. “Of course they’re incredibly proud of him, but you’ve got to joke.”

Wolfe saw sketches of the show early on but was wowed by actor William DeMeritt’s depiction of his life. He was particularly touched by how DeMeritt, who also is Jewish, painted a portrait of contemporary Judaism and Jewish thought that was miles away from “Fiddler on the Roof” stereotypes, Gunderson said.

“I was writing what I saw and knew to be true and [Wolfe] felt very struck by it and that’s the biggest compliment I could get from him,” she said. “I know I got the science right. But he was like, ‘I never would have written the play like this. I’m pleasantly surprised.’”

City Theatre’s managing director, James McNeel, said he is excited to bring virtual performances to the crowds that used to flock to the Bingham Street theater on Pittsburgh’s South Side.

“The artistic staff have curated a collection of original content featuring local artists as well as partnerships with peers from around the country,” McNeel said. “While nothing can replace the feeling of live performance, this is the safe and responsible approach to help ensure the pandemic is soon behind us.”

“The Catastrophist” will be available to stream until April 4.

Other spring season offerings from City Theatre include the film adaptation of the play “Room,” based on the writings of Virginia Woolf, and “Homegrown Stories 2,” which challenges five local playwrights to create 10-minute plays “responding to the current moment,” according to a City Theatre spokesperson. The theater will round out its spring lineup with short digital solo vocal performances dubbed “Spotlight.” PJC