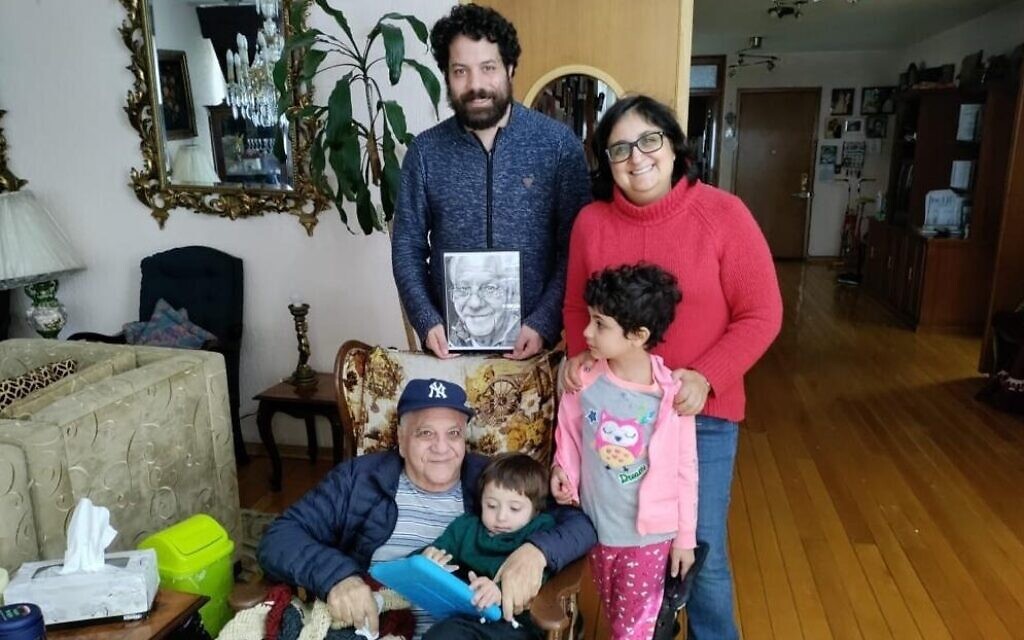 It was just a few hours before the second Passover seder when I got a call from my mother in Mexico. It was around 11 a.m. — 10 a.m. in Mexico City — a very unusual time for her to call, as she’s usually just waking up then. And she typically doesn’t call me on Saturdays. Something was clearly wrong.

When I answered the phone, my fears were realized: My grandfather, my mother’s father and my last living grandparent, was very ill, and the doctors had given him at most a few hours to live.

I started making arrangements for immediate travel to Mexico.

The following morning, Sunday, I woke early to go to the airport — leaving my wife and kids behind in Pittsburgh — to say goodbye to the man who not only fathered a great family but also spent his 97 years giving to his community. Just three months before, he was a very healthy man for his age, still waking early, walking daily, going to work and to the synagogue. An unfortunate fall changed all that. He hit his head and needed surgery to remove blood clots. The surgery went well, and he was still in the process of recovery when a disease struck him.

When I arrived to see him, and let him know I was there, he was barely able to respond, saying only “hola, mi vida” (“hello, my life,” a common way of referring to loved ones in Spanish).

Later, we became hopeful as he unexpectedly began to improve, but the ups and downs continued for two days.

During this time, my son back in Pittsburgh developed a very high fever, and my wife took him to the hospital. As a precaution, he was administered a COVID PCR test. So, I was now dealing with both my grandfather’s and my son’s health.

On Wednesday, my mother and I were called early in the morning and told that my grandfather was again getting worse and to get to his home quickly. We arrived too late. I entered a home full of people crying. He had already passed away.

At that moment I couldn’t cry, as I felt my mission was to comfort my mother. But his death was a great loss to me as well. He was also my grandfather, who played with me and told me jokes as a kid. He would always have candy at his home for his grandchildren, have plenty of toys for us to play with, and share with us his deep knowledge on Shabbos and the holidays.

When I called my wife to tell her the news, I immediately broke down in tears. One of my cousins hugged me. Then, like a whirlwind, we began the process to get my grandfather buried as soon as possible, according to Jewish tradition. As it was Chol HaMoed, he could be buried but the shiva could not start until the end of Passover, which was on Saturday, the same day of my return flight to Pittsburgh. I spent the rest of the day comforting my mother.

The following day, Thursday, I learned that my son had tested positive for COVID. My wife and my daughter also took rapid at home tests; my wife was positive, and my daughter negative. I had a runny nose and so I went to a lab to get a rapid test as soon as it was open. The result was positive. This meant that I had to isolate myself, and thousands of miles northeast of where I was, my wife had to do the same with our two kids.

As I locked myself in a room in my mother’s home, the symptoms started to get worse. I started coughing a lot and was extremely tired, preventing me from doing anything other than staying in bed and watching movies. My wife, on the other hand was dealing with headaches, tiredness and two very active kids. My son’s symptoms quickly diminished, and my daughter soon tested positive but remained asymptomatic.

A week passed, and while my whole family was already sitting shiva, I was still unable to leave my room. I was unable to properly mourn my grandfather’s loss, to share my memories of him with my family, or to help my wife with her own ordeal back at home. The only thing I could focus on was on simply remaining alive and getting through the day.

As the first full week after my positive test came to an end, and my symptoms were diminishing, I tested negative for COVID. I booked a flight for the next day.

I got the chance to spend the last full day of shiva with my family. I was also able to go to the “ereye”, which is a Sephardic custom done the last night of shiva in which a ceremony is held remembering the departed.

The next day, I accompanied my mother while she was raised to mark the end of the shiva, held her while she cried, and said my last goodbyes to all my extended family before I headed to the airport. A few hours later I arrived to my home in Pittsburgh. It felt very strange. I felt like I had been absent for a whole year, although only 12 days had passed.

At the same time, it also felt like a dream, like nothing actually happened, and that the next Friday I could again call my grandfather before Shabbos, as I did every week. Except, of course, that the last part was not true anymore. PJC

Eduardo Schnadower is a Ph.D. student in Information Systems and Management at Carnegie Mellon University. He grew up in Mexico City and moved to Pittsburgh in 2016 in order to pursue his studies. He is married and has two children.