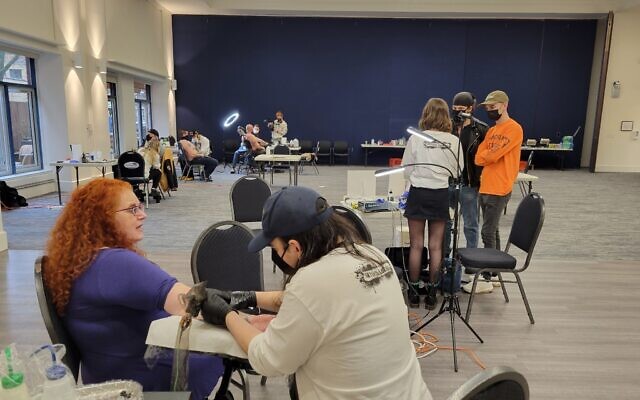 Healing Ink provided tattoos as a way to heal for those connected with the Oct. 27 massacre at the Tree of Life building. Photo by David Rullo

Craig Dershowitz believes art can heal. He came to Pittsburgh on Feb. 23 to help survivors, first responders and others affected by the massacre at the Tree of Life building.

Dershowitz is the co-founder and president of Artists 4 Israel, an organization that helps prevent the spread of anti-Israel bigotry through art and aims to help communities and people affected by terrorism and hate.

Healing Ink, a project of Artists 4 Israel, was created to help Israeli terror victims cover their scars with tattoos. The same service is now offered to victims of antisemitic terrorism in the United States.

Twenty Pittsburghers received tattoos from Healing Ink, about half at the Squirrel Hill Jewish Community Center, Dershowitz said. Others got their ink in private locations either because of COVID-19 concerns or because they didn’t want to be on display publicly.

“It’s incredible to see this planning come to fruition,” Dershowitz said, “especially when you see antisemitic activity and you feel helpless and like there’s nothing you can do. To feel like I’ve done just a tiny bit to help offset that hate and help heal some of the people affected by that, and bring attention to it, it’s one of the most important things I’ve ever done.”

The tattoo artists were volunteers from Pittsburgh and other locales, including Niles, Ohio; New York City; and Orlando, Florida.

Long before the planned event, Healing Ink connected those wishing to get a tattoo with a tattoo artist to discuss ideas. The Feb. 23 event was the first time the pairs met in person.

Antoine Davis has tattooed people for 12 years at Blackwater Tattoo in Niles, Ohio. He was excited to hear about the opportunity with Healing Ink and said it spoke, in part, to why he worked in the industry.

“My buddy Jesse informed me of the cause, and I was all about it,” Davis said. “One of the things we do in this industry is help people through traumatic times. It’s our job to bring those feelings and emotions into our artwork. It’s a big reason why I got into this industry — to help people.”

Davis tattooed a tree onto the chest of David Hurak, a member of the North Hills Special Response Team. Hurak was one of the first responders at the Tree of Life building the day of the attack. 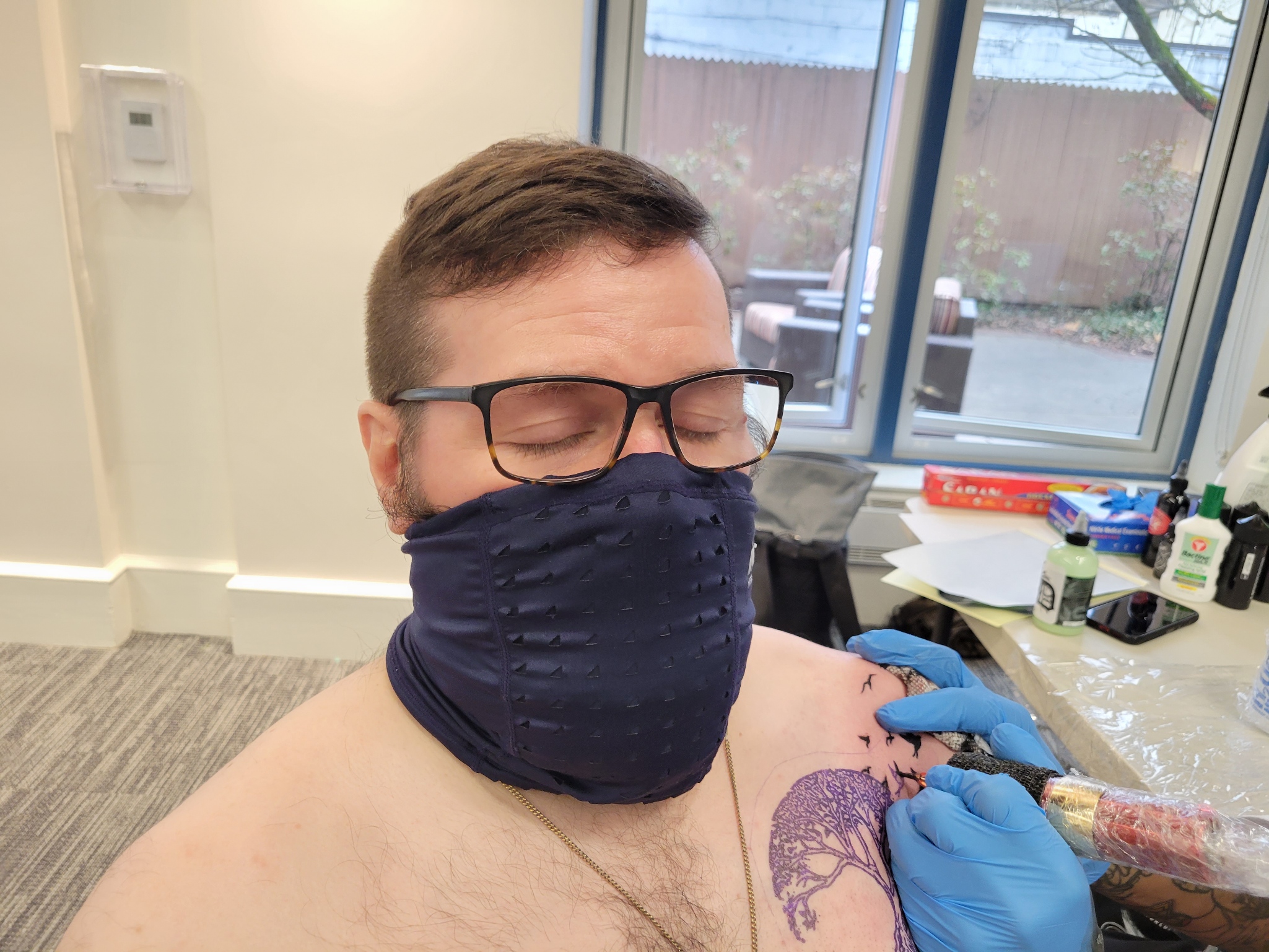 David Hurak received a tattoo to find closure after responding as a first responder to the Oct. 27 attack. Photo by David Rullo.

Hurak said the tattoo was an opportunity for closure.

“It was such a hateful, violent day, and this is bringing together peace and togetherness and sharing,” he said. “Everyone has stories in this room.”

Maggie Feinstein, director of the 10.27 Healing Partnership Director, helped secure the JCC for the event, a location that she said made sense after she learned more about Healing Ink.

“When I got to know Craig and heard more about the scope of their work, it seemed like unconventional spaces are in line with their work,” Feinstein said. “They did want it to be somewhere busier, a place that had its own life to it, that wasn’t a tattoo studio — quiet and serene. That isn’t how they operate.”

Feinstein said people often find healing through art, pointing to songs that were composed after Mac Miller’s death and large murals painted after the death of George Floyd as examples. She said the idea of getting a tattoo after a traumatic loss isn’t surprising.

Amy Mallinger came to the JCC with her twin brother, Eric, to get a tattoo in honor of their grandmother Rose Mallinger who was killed on Oct. 27. Eric Mallinger decided on a large rose on his bicep; Amy Mallinger got a smaller rose on her right forearm.

“I wanted to get a rose to commemorate her,” Amy Mallinger said. “It was just a matter of picking out which one I wanted that was as simple as her because she was a simple person. I think all she needed in life was her family. So, the rose represented that. And then, I also wanted to add her initials in it to just add a little more spice.” 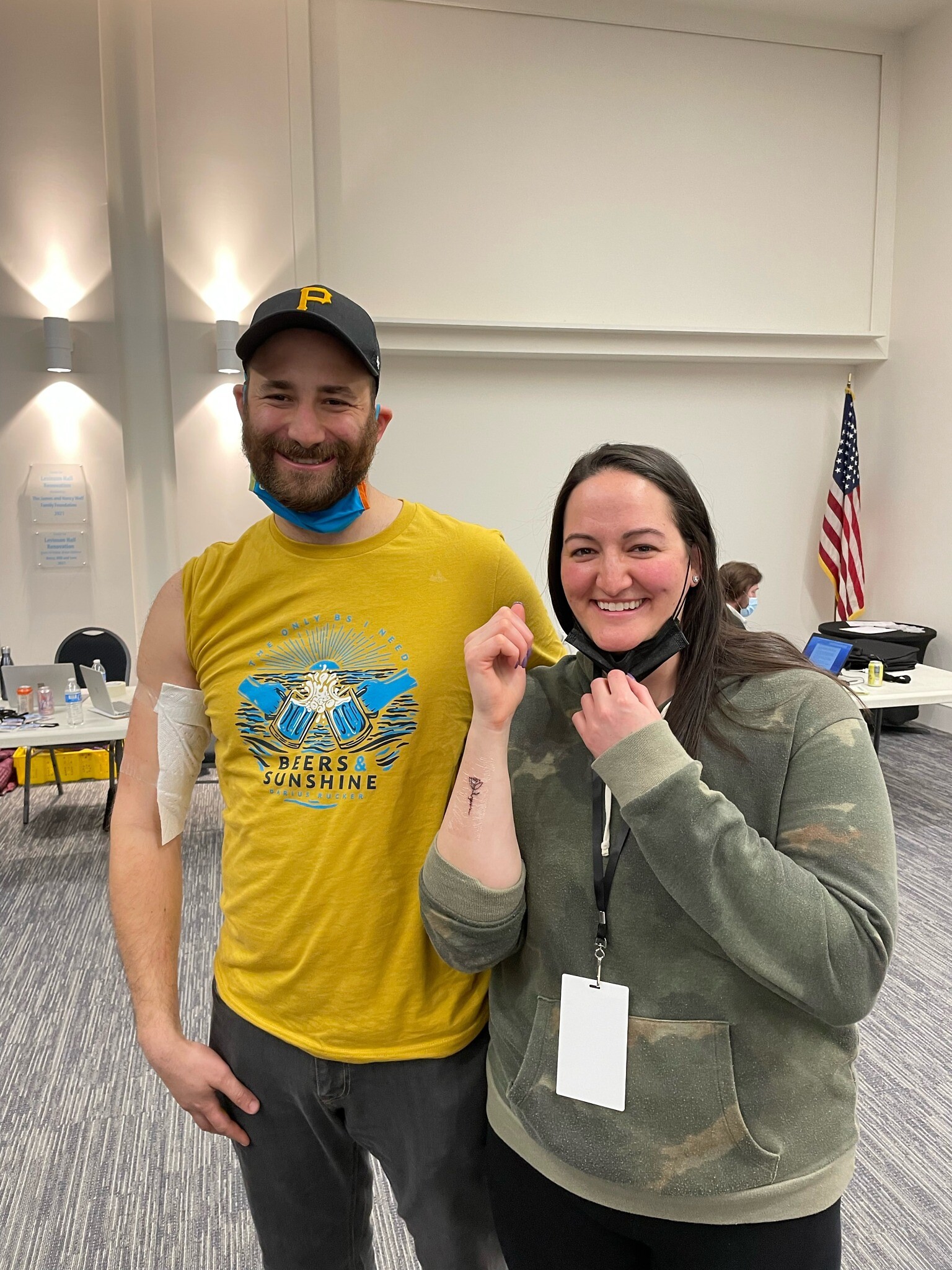 Amy Mallinger and her brother Eric got tattooed in honor of their grandmother, Rose. Photo provided by Amy Mallinger.

Healing Ink originally planned to visit Pittsburgh in October 2021 but had to postpone the trip because of the COVID-19 surge then.

The idea of receiving a tattoo to heal from a trauma, even an antisemitic trauma, isn’t without controversy.

In an August interview about Healing Ink’s expected visit, Rabbi Danny Schiff, Foundation scholar at the Jewish Federation of Greater Pittsburgh, told the Chronicle that tattoos were “unacceptable” in Judaism.

The prohibition, he said is found in Leviticus 28.

“Placing permanent markings in the flesh is forbidden and the inverse of holiness,” Schiff said.

“We’re not out there with a gun protecting people from terrorists,” Dershowitz told the Chronicle in August, “but we’re saving them. They’re coming out of their houses — some of these people haven’t left their homes alone, they haven’t worn shorts, as silly as that sounds, in 10 years. They can’t hold their children because of PTSD … I don’t want to seem immodest, but I’m proud that we’ve helped them turn their lives around.”

Feinstein urged caution for those who don’t agree with the decision to get tattoos.

“I would love to shout from the rooftops that there will be many different opinions about Jewish traditions and tattooing,” she said. “I encourage people to reserve judgment on the ways that people heal, not leaning into the moral authority that Judaism has said a tattoo is wrong. People should make the decision for themselves.”

For Tree of Life member Kris Kepler, the decision made sense.

Kepler was supposed to be at the Tree of Life building the day of the attack. He had promised Cecil Rosenthal, who was murdered that day, that he would meet him there, but Kepler didn’t go because he wasn’t feeling well. 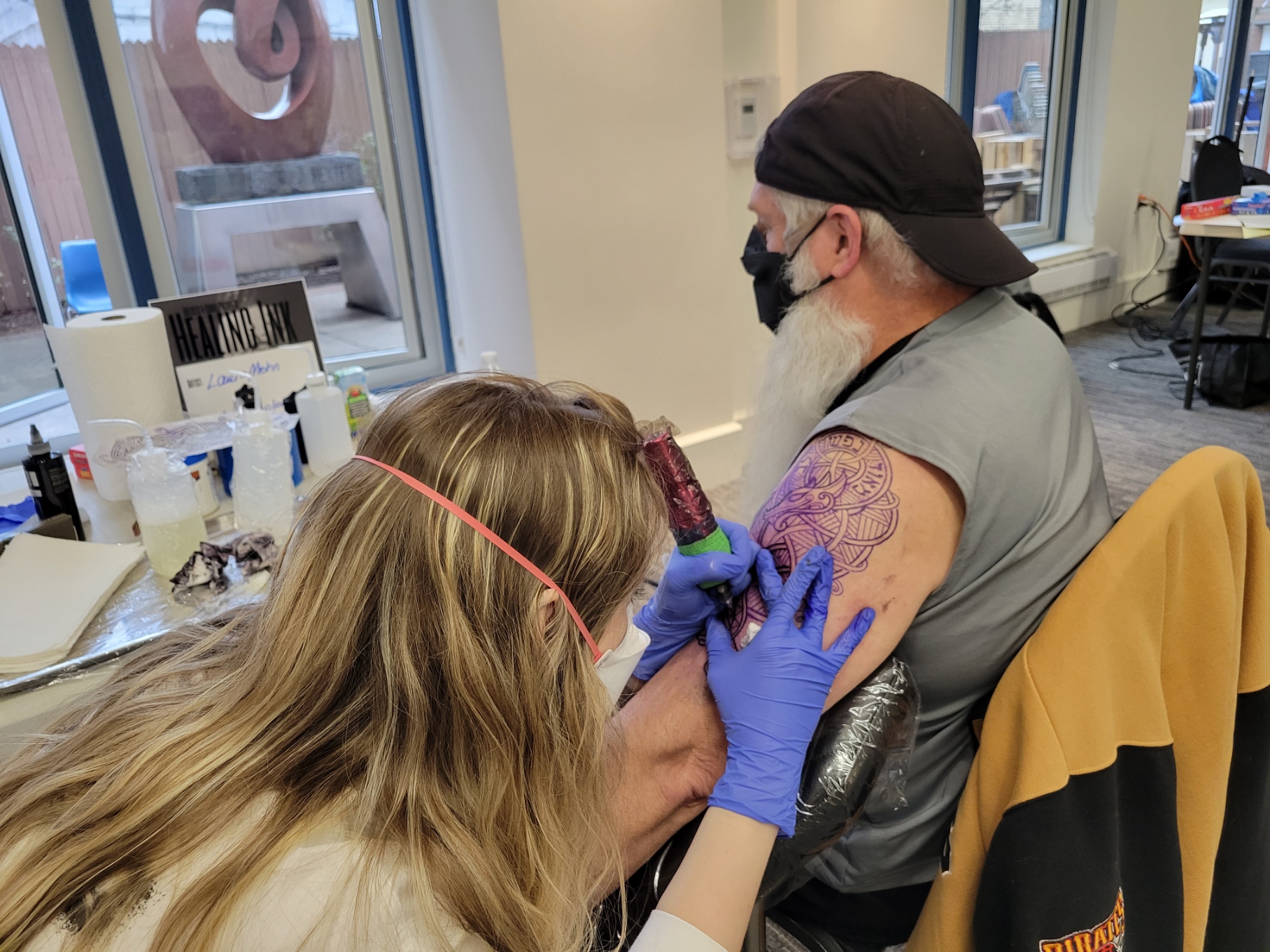 Kris Kepler got a tattoo in memory of his friend, Cecil Rosenthal. Photo by David Rullo.

“I’ve always felt this incredible amount of guilt or trauma,” Kepler said. “So, when this showed up, I thought, ‘OK, I know I’m not supposed to do this and my rabbi probably won’t be happy,’ but I thought this was a great opportunity to do this, and for it to have a lot of meaning.” PJC