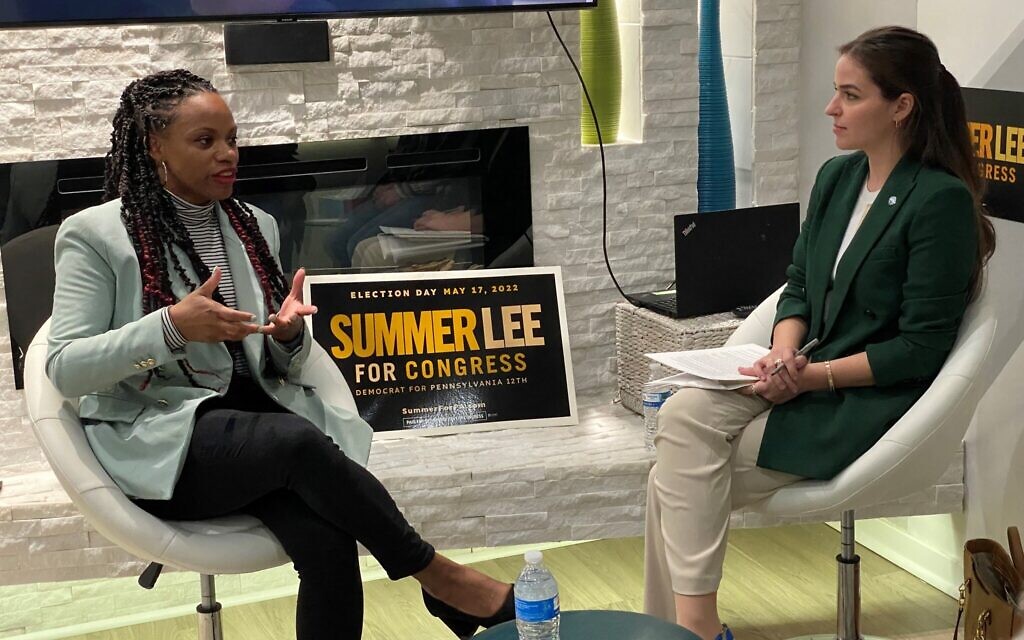 Summer Lee spoke at a forum organized by the CRC earlier this year Photo by Jim Busis.

I’m Summer Lee’s campaign manager. I grew up here, in Pittsburgh’s close-knit Jewish community, attending Dor Hadash, the small Reconstructionist congregation in Squirrel Hill where I became bat mitzvah. The things I learned from Pittsburgh’s Jewish community are the same things that call me to organize for a better democracy — and the same values that I have seen in Summer that make me know she is the leader our Jewish communities need and deserve in this moment.

There is no one more dedicated to fighting for our shared values with the courage, vision and compassion it will take to meet this moment — to fight antisemitism and anti-Blackness at its white supremacist core, and to build a more just and thriving future for all Pennsylvanians.

Justice is woven into every part of my understanding of Judaism. Growing up, our social justice committee, which my father leads today, was always organizing events for HIAS, welcoming refugees or asylum-seekers, or combating environmental justice issues. When I was studying Torah portions with Dan Leger, in each lesson, he would find a way to connect it to “tikkun olam,” “the repair of the world.” As he says, “We pray with our feet, we pray with our votes. We might open a prayer book once in a while — some of us might do it more often than others — [but] the way we honor being connected with the Divine is by actively trying to make the world a safer, better, more wholesome place to live in.”

That vision of justice is woven into every move that Summer has made throughout her life — as an organizer, legislator and community leader. That’s why, when her home school district was rated top 10 in the nation for disproportionate violence against Black students, she launched a successful initiative to transform the Woodland Hills Schools Board. It’s why when George Floyd was murdered in 2020, she spearheaded the passage of urgently needed police accountability measures, even in the face of Republican obstructionism. It’s why as the first Black woman ever elected to the State House from Western Pennsylvania, she has worked tirelessly for economic, racial, reproductive and environmental justice. She has been an unwavering advocate for unions and workers’ rights to strengthen the right to organize, ensure paid sick and family leave, and raise wages.

The second thing is leadership. Summer says to me, nearly every day: “This is a ‘we’ movement, not a ‘me’ movement.” She knows that building a democracy and community are not about any one candidate or campaign — it’s about all of us, taking action to show up for the people and places we love. It’s why she built unprecedented coalitions to make real change for working people and representation in our area. She doubled voter turnout in her first race, and has continued to expand the electorate ever since. As the cofounder and chair of UNITE, she has recruited, mentored and delivered for candidates up and down the ballot, welcoming tens of thousands of new voters into the political process, and playing a key role in electing slates of school board members, county councilors, judges and mayors.

At Dor Hadash, we didn’t have a rabbi. Instead, the services were lay led, with members of our community stepping up each week to lead the services. Even if we didn’t think we were ready, the congregation encouraged everyone to play a role in creating our spiritual home. This taught me about who owns sacredness, wisdom, and expertise — all of us and no one. And Summer has taught me the same things in her approach to democracy. This quote was on the wall in one of the rooms: “You are not obligated to complete the work, but neither are you free to desist from it.” Whether it’s building the coalition that stopped a fracking proposal, winning elections up and down the ballot, or bringing community leaders to Harrisburg to co-govern and craft policy, Summer has never desisted from that work.

Lastly, my Jewish faith has taught me about the need for solidarity, and Summer has embodied the power and possibility of true solidarity throughout her life. She has shown up for us standing up against antisemitism every day, mourning with our community in the aftermath of the Tree of Life, and working in deep partnership with Jewish community leaders for climate justice, immigrants’ rights and reproductive freedom. That’s why J Street, Bend the Arc, and Jewish community groups support Summer. We are facing grave challenges right now — repeated attacks on our democracy and our fundamental rights. We need leadership that understands that our struggles are interconnected. We must tackle antisemitism and anti-Blackness together, wherever they show up and root them out at their shared core, with courage and accountability. Summer Lee is that just leader for all of us. PJC

Annie Weinberg is the campaign manager for Summer Lee.