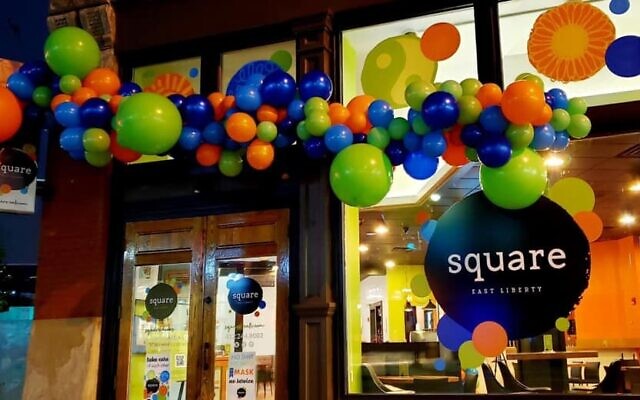 The Square Cafe has recently moved from its longtime home in Regent Square to the city's East End. Photo by Sherree Goldstein.

For Sherree Goldstein, the desire to start a neighborhood cafe was a “pipe dream” that first entered her mind almost two decades ago.

“I thought it would be cool and fun to hang out with my friends at the kind of place that had good pastries and desserts and community,” said Goldstein.

Now, 17 years later, Goldstein has a full-service restaurant serving breakfast and lunch, with more than 30 employees. Despite the pandemic, her business is expanding. She recently moved her Pittsburgh eatery, Square Cafe, from Regent Square to East Liberty because she needed more space to accommodate her growing customer base.

The Pittsburgh native said that her initial idea of a hip gathering place for friends has morphed into something larger than she ever dreamed.

At the restaurant’s former Braddock Avenue location, especially on a weekend, space was at a premium. The cafe’s new home on Highland Avenue, in the former BRGR and Spoon site, is almost four times as large.

“We were having some trouble with our outdoor seating in Regent Square,” Goldstein said. “This offered us a much better opportunity. We’ll have a rooftop deck as well as a courtyard patio.”

Open from 7 a.m. to 3 p.m. every day, the restaurant has built a large and loyal clientele, serving a mix of vegan choices alongside traditional meat entrees.

“We try to appeal to a diverse palette,” Goldstein said. “I think we’re pretty fresh and innovative. We use local sources as much as we can and when they’re available.”

The new location will allow Square Cafe to host after-hours events including birthday and graduation parties and bar or bat mitzvah Friday night dinners. To prepare for the additional business, the restaurant has hired six new employees and plans to hire more, bringing the total number of staff to 50 by spring.

After being closed to on-site dining for months due to COVID-19 restrictions, and following its relocation, Square Cafe welcomed its customers back on Oct. 5.

Goldstein said the cafe’s loyal customers have found the new location without any trouble. In addition to the East Enders who typically live within a three-mile radius of the restaurant, her customers come from the wider area as well, including the South Hills, North Hills, Murrysville and Irwin — some from more than 20 or 30 miles away — making Square Cafe destination dining.

The restaurant also continues to offer delivery, a service that was expended for several months during the early days of the pandemic. While the restaurant was closed to in-person dining, Goldstein and her staff not only delivered prepared food from their menu but also provided staples to customers they were able to keep in stock but were in short supply at local supermarkets.

“We were selling gallons of milk, pounds of flour, eggs, cheese,” Goldstein said. “The grocery stores were starting to see shortages pretty quickly on things and we were able to get things in from a different routing system than those that emptied the grocery stores.”

Helping the community is nothing new to Goldstein. Before starting Square Cafe, she worked at Gateway Rehabilitation Center, a drug and alcohol treatment facility, for 12 years and recently completed a term on the Jewish Community Center of Greater Pittsburgh’s board of directors.

Before her stint at Gateway, Goldstein, who grew up in Mt. Lebanon and attended Temple Emanuel of South Hills, worked at the JCC as a camp counselor when she was a teenager and at the JCC’s Squirrel Hill location.

She credits those early experiences at the JCC with providing a foundation as she moved through different careers.

“When I went to work at Gateway Rehab Center, I did adventure therapy,” Goldstein said. “I taught team building, experiential therapy, problem-solving communication. It was a wonderful job. It’s kind of the same here, right? There’s a lot of employees and customers to deal with. I do a lot of interactions with that. And just being a part of the community is really important to me.”

Goldstein’s pioneering spirit is evident. Not only did the mother of two adult children start her own business but she also crossed a bridge and moved from the South Hills into the city 25 years ago, living in the same East Liberty neighborhood Square Cafe now calls home.

The entrepreneur is excited by the new space, the opportunities it provides and the support the community has shown.

“The East Liberty Chamber of Commerce is so happy to have us here,” she said. “They are going to do a ribbon cutting with us and we feel very welcome. The neighborhood is super excited to have us here. We love it. We loved Regent Square when we were there, we loved the neighborhood and the community. Now, we feel we’re more centrally located. We have a larger population we can pull from and it’s more diverse. It’s beautiful.” PJC