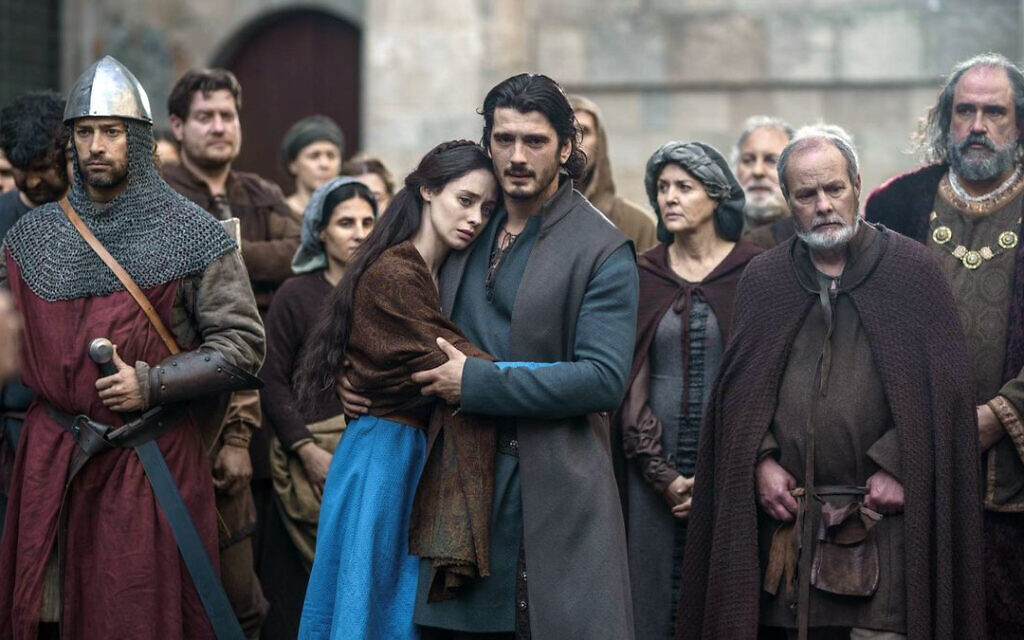 The cast of 'Heirs of the Land' perform during filming in Spain in 2020. (Courtesy of Netflix)

(JTA) — The series “Heirs to the Land” that dropped on Netflix last month looks, at first glance, like just another installment in the fast-growing genre of Spanish period dramas.

In some ways it is, featuring the familiar mix of romance, violence and a liberal dramatization of key historical events in medieval Spain that have made international hits out of several recent Spanish productions such as “Isabel” and “El Cid.”

But “Heirs to the Land” also takes a deep dive into what it meant to live as a Jew in Spain at the time, when the strictly Catholic country began its descent into organized persecution of minorities that culminated with the Inquisition.

The series reflects a growing appetite in Spain for exploring local history in general, especially its oft-overlooked Jewish chapters.

“There’s a growing realization in Spain that Sephardic history isn’t about ‘them’ but about ‘us,’” said David Hatchwell Altaras, a former president of the Jewish Community of Madrid and one of the co-founders of the city’s planned Jewish museum.

The show’s creators said they wanted to go beyond the dramatic scenes of execution and violence that have been typical of Spanish productions dramatizing Sephardic Jewish history.

“You have multiple references to the Inquisition and to antisemitism in recent historical production, but I wanted to go beyond and show the texture of life for a Jew in Spain just before the expulsion,” said executive producer Jordi Frades, who is not Jewish.

Possibly the most heavily Jewish production of its kind in Spain, the 10-episode second season of “Heirs to the Land,” based on a novel by Ildefonso Falcones, follows the life of Hugo Llor, a fictional character born in 14th-century Barcelona.

The illiterate son of a cleaning lady, Llor gets into trouble with the law and finds refuge with a Jewish family that teaches him to become a winemaker, eventually paving his path to the upper echelons of society.

His journey provides a window into how hundreds of thousands of Sephardic Jews would have reacted to the tightening noose that eventually ended their presence as a vibrant community on the Iberian Peninsula.

Whereas previous productions about the Inquisition — including the Netflix series “The Cathedral of the Sea,” which Frades also directed, and the Netflix film “Coven of Sisters” — depicted Jews briefly and mostly as hapless victims, “Heirs to the Land” digs much deeper.

It depicts a Jew learning of the massacre of Jews in Valencia in 1391 even as he maintained trust in the government and king, who, at that time, sometimes intervened to protect Jews from lynchings — but at other times ignored or encouraged them.

Jucef Crescas, a character loosely based on the real-life Jewish philosopher Hasdai Crescas and his pupil Joseph Albo, adopts external Christian customs such as wearing a cross, and changes his name to Raimundo. But he pursues neither Christian nor Jewish theology, devoting himself to science instead.

Another protagonist, Regina Llor, is a Jewish doctor who genuinely wishes to convert to gain the acceptance she has always desired and to marry Hugo, the protagonist, who is not Jewish.

Elsewhere, Dolça, a Jewish woman who was Hugo’s first love, chooses death over conversion. A lynch mob executes her in one of the many gory scenes that earned this series a mature-audiences rating. In an earlier scene, she refers to a non-Jew dismissively as “just a Christian” — an acknowledgement of Jewish isolationism and feelings of superiority.

The execution scene was “the first time that this tragic part of Jewish history has been shown on television” in such a manner in Spain, according to Reconectar, a nonprofit that seeks to connect people with Sephardic ancestry with Judaism.

Relying on multiple consultants and experts on Sephardic history, the show also attempts to explore realistically how non-Jews treated Jews back then. Even the noble and courageous protagonist, portrayed by superstar Yon González, says at one point about his estranged wife, who had converted chiefly to be able to marry him: “I wish that damned Jewess had stayed out of my life.”

There’s also an attempt to capture Jewish communities and professional circles at the time, ranging from Jewish doctors performing abortions on Christian women (enabled by Judaism’s more permissive stance on ending pregnancies) to the production of kosher wine exclusively with Jewish labor, as mandated by Jewish law.

(There are also a few slip-ups, like several scenes in which supposedly devout Jews publicly say “Jehovah” — a serious no-no in their circles.)

Frades said the new series attempts to do for the Inquisition what “Schindler’s List” has done for the Holocaust.

“I must admit that I’ve found some references for explaining what happened in that period in what you can see in ‘Schindler’s List,’” he said.

The reception of “Heirs to the Land” has been good, Frades said. Since dropping on April 15, the series has cracked the list of Netflix’s top-10 most viewed shows in 50 countries, including Israel and France, he said, citing information provided to him by Netflix.

“It’s amazing to me because there has been so little active promotion and the series was done on such a small budget,” Frades said. He declined to disclose the budget but did say that “it’s a lot less than what ‘Game of Thrones’ paid for catering.”

Hatchwell, the co-founder of the Madrid Jewish museum, is not surprised by the audience interest in the series.

The government’s promotion of Jewish heritage sites may also be fueling interest in the show, he added.

“There’s a growing realization that Sephardic heritage is Spanish heritage,” Hatchwell said, citing a 2008 study in which Sephardic genes were observed in about 20% of about 1,000 Spanish men tested.

A taboo in Spain until the death in 1975 of the pro-Fascist dictator Francisco Franco, the study of Jewish ancestry in Spain has been facilitated by the advent of the internet and social media.

To Hatchwell, the current interest in the Inquisition is part of a broader interest in history in a moment when Spain is “experiencing an identity issue,” fueled by tensions around separatism in Catalonia and crises around Basque nationalism.

The emergence of Jewish themes in Spanish popular culture is potentially a boon for groups like Reconoctar, which attempt to build bridges between the descendants of Sephardic Jews and the Jewish world.

“It’s popularizing an important period in history that has not been fully discussed because of historical circumstances,” said Ashley Perry (Perez), Reconectar’s president. This trend benefits multiple initiatives, including the digitization of Inquisition-era records for genealogical research and getting Spain to join Portugal in establishing a national day of remembrance for the victims of the Inquisition.

The politics are of little interest to Frades, who said his motivations are purely about storytelling.

“It’s about breaking down a big political narrative, a statistic, to individual stories,” he said.

“There’s a Jewish saying about saving the world by saving one person,” Frades added. “Well, in the same vein: If you tell one person’s story, you’re telling the story of a whole world.” PJC