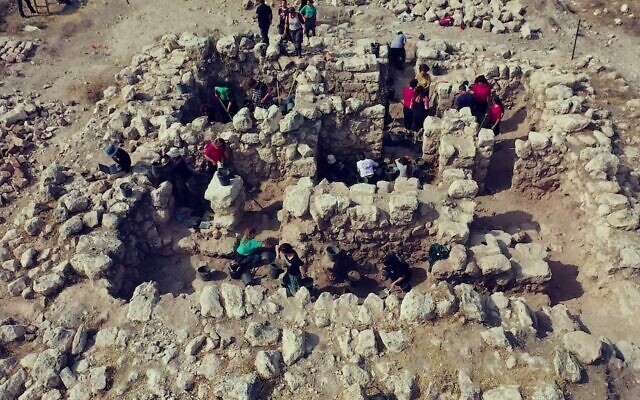 Workers at the site of the excavation in the Lachish Forest. (Photo by Emil Aladjem, Israel Antiquities Authority)

(JTA) — Archaeologists excavating a 2,100-year-old fortress say it provides “tangible evidence” of the events from the Hanukkah story.

The site, located west of Hebron in the Lachish Forest, includes remnants of a fortress made of stone and wood that the archaeologists working with the Israel Antiquities Authority believe was burned by the Hasmoneans — Judean descendants of the Maccabees — during a battle with the Macedonian Greek Seleucids.

The excavation has turned up evidence of a fire in the form of burnt wooden beams as well as pottery, weapons and coins.

The coins found at the site point to the destruction of the fortress by the Hasmonean leader John Hyrcanus around 112 BCE, the archaeologists say.

“The excavation site provides tangible evidence of the Hanukkah stories. It appears that we have discovered a building that was part of a fortified line erected by the Hellenistic army commanders to protect the large Hellenistic city of Maresha from a Hasmonean offensive. However, the finds from the site show that the Seleucid defenses were unsuccessful; the excavated building was badly burnt and devastated by the Hasmoneans,” leaders of the dig said in a statement.

The holiday of Hanukkah, which this year begins Nov. 28, commemorates the period during the 2nd century BCE when the Seleucid King Antiochus attempted to stamp out all expressions of Judaism in Israel, which was then under the control of the Seleucid Empire.

The Maccabees, a Hasmonean family that were part of the priestly class, led a guerrilla war against the Seleucids, eventually retaking the Temple in Jerusalem, which had been desecrated by idol worship at Antiochus’ direction. The holiday of Hanukkah celebrates the Maccabees’ cleansing and rededication of the Temple as well as the lighting of the menorah there. PJC