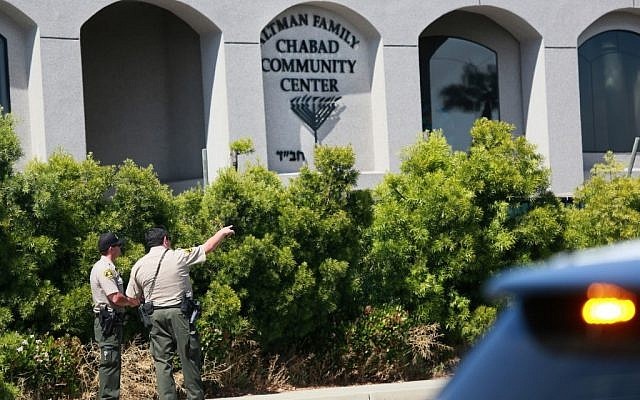 San Diego Sheriff deputies look over the Chabad of Poway Synagogue after a shooting on Saturday, April 27, 2019 in Poway, California. (SANDY HUFFAKER / AFP)

Passover had just ended on April 27, 2019 when my husband, Max, turned on his phone only to receive the most unimaginable text possible. It read that there had been an anti-Semitic shooting in his family’s synagogue in Poway, California that day. We were in utter shock.

We found out very quickly that Max’s family members were all safe even though they were present during the shooting. However, a dear family friend, Lori Kaye, of blessed memory, lost her life that day. It was a lot to take in.

It was only six months earlier that the shooting at the Tree of Life building had taken place a mere few blocks from our home in Pittsburgh. How was it possible that both my childhood neighborhood and my husband’s had been the site of attacks targeting Jews, and how was it possible that the beautiful Lori that we knew was no longer here?

Lori Kaye was a kind, giving, loving person with a caring and warm personality. Lori had a heart of gold and always thought about others and their needs. Her smile would light up the room and her presence would radiate wherever she went. Lori was extremely close with Max’s biological mother (our daughter’s namesake), who passed away from breast cancer when Max was 8 years old. Lori took care of her while she was sick and then took Max and his brother under her wing like they were her own children, often having them live in her house for long periods of time.

Lori came to Pittsburgh to be with us on our wedding day – it was a no-brainer, we were family! And after each of our daughters was born, Lori handpicked thoughtful gifts for them and always made special trips to my in-laws to spend time with us on our visits to San Diego.

I feel so incredibly blessed to have known Lori and feel so much gratitude knowing that she had a huge hand in raising my husband during such a vulnerable time in his life, which allowed him to be the person he is today. 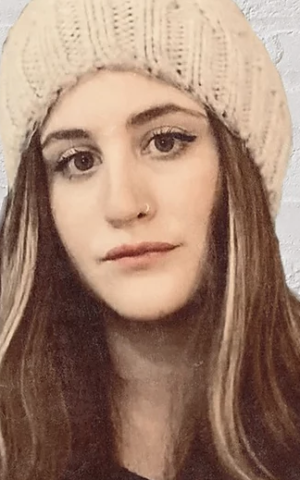 As a singer-songwriter I always had the idea of writing a song about Lori so that her light and legacy could be shared with the world. However, when the pain of the loss was still so fresh, it just didn’t feel right to embark on this creative project immediately. About a year later, right after making aliyah to Israel and being stuck inside our new home due to the pandemic, it hit me. It had almost been an entire year since the world lost Lori. I decided then that it was time for people to know just how amazing she was and that I would let others in on the impact Lori had on me through writing a song.

My intention with the song was to paint a picture of who Lori was and how she lived her daily life constantly doing acts of good and thinking of others. I wanted to bring a little bit of Lori to those who never were lucky enough to meet her.

It’s always important to fight the battles necessary to eradicate anti-Semitism, racism, and any form of inequality in our world. But it’s also important to remember the individuals who lost their lives and to keep their lights burning by sharing their stories and lives with the world.
Lori’s love, grace, and beauty will never be forgotten. All the good that she did, and the souls that she touched during her time on this earth, will have a ripple effect far greater than we will ever be able to comprehend. May her soul have the highest of aliyahs (elevation) and may we all take it upon ourselves to give more to others and spread more light in this world in Lori’s memory. PJC