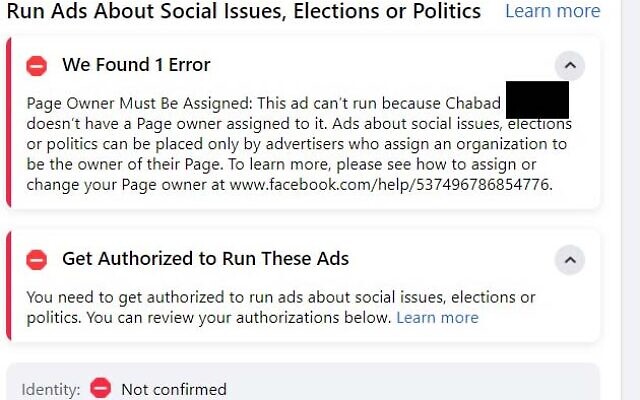 Facebook has rejected ads from different Chabad Centers that they said fell into their social issues, elections or politics category.

The class, “Outsmarting Antisemitism,” is being taught at Chabad Centers across the United States, including centers in Monroeville, South Hills and Squirrel Hill.

If you aren’t already on the mailing list of the centers, though, or a friend of a local Chabad rabbi, you might not be aware the class is even being taught. Facebook has rejected ads from at least 50 different instructors who are offering the course nationally. The social media site did not, however, flag or ban any posts promoting the class.

David Kearns, a spokesperson for Facebook, told Emma Goss in a Nov. 5 Jewish News of Northern California story, that the ads fell into Facebook’s social issues, elections or politics category and were rejected because it was not disclosed who was paying for the ads, a requirement created in 2018 to improve transparency and curb foreign entities and bad actors from influencing elections and sowing disinformation.

Goss’ story explained that once the ads were rejected, Facebook provided a checklist of steps Chabad needed to follow to have its ads authorized, including providing photo identification, Chabad’s tax ID number and a disclaimer about who paid for the ad.

This, even though Chabad is not a political organization.

Rejected ads may also be appealed. However, Kearns said that social-issue ads that did not fulfill disclosure requirements would not have a different outcome, but added, “We regularly take feedback and evolve our policies.”

JLI Director Rabbi Zalman Abraham said that, in addition to the ads submitted by local Chabad Centers, JLI attempted to run advertising on Facebook. In its rejection message, Facebook stated “that the ad might have been rejected because it is about ‘sensitive social issues’ that could influence elections or pending legislation,” Abraham told eJewishPhilanthtropy.

Abraham said in a statement that JLI commends Facebook’s efforts to block hate speech across their platforms but voiced frustration that “they have not yet figured out how to discern hate speech from its opposite and instead choose to shut down all conversations on the topic — including silencing the voices of our instructors who are working to educate the public in the struggle against the world’s oldest and longest-running hatred.”

In an interview with the Chronicle, Abraham said that social media advertising is a large part of its reach: nearly 1 million people view JLI ads on Facebook and Instagram for its courses, but he couldn’t quantify how many of those people signed up to take classes at a local Chabad center.

He called Facebook’s response complicated but said that the social media giant had been responsive.

“They’ve been trying to help us, although, understandably, something of this magnitude can’t be changed overnight. So, we haven’t actually seen results, but they have been responsive at a high level.”

Chabad Jewish Center of Monroeville Rabbi Mendy Schapiro, like the other local Chabad centers, offers three different JLI courses each year. He said that he was surprised by Facebook’s position because the courses are educational and contain no propaganda.

“I realized though, that we’re talking about a computer system rejection. I guess the surprising part is why the programmer of Facebook would set up a program to reject it, but ultimately,” he said, “I don’t think someone specifically rejected it.”
Schapiro, who couldn’t recall if he submitted an ad or if his application was rejected before even being submitted, said he decided not to publicize the rejection because of the course itself.

“The class is about battling antisemitism through building Jewish pride and self-worth. Awareness is important but it is more powerful and productive to be aware of your own Jewish pride and who we are. Kicking and screaming every time someone says something about us, or tries to silence, that may be bothersome, but it’s not where our focus should be.” Instead, he wants the focus to be on “our Jewish pride and connection to Hashem.”

Schapiro has a history of having advertising rejected by Facebook. Earlier this year, the rabbi attempted to place an ad for the course, “The Inside Story of the Iron Dome.”

That ad, like the ones received by Chabad centers across the country for “Outsmarting Antisemitism,” was rejected with a message saying that the ad “may have been rejected because it mentions politicians or is about sensitive or social issues that could influence public opinion, how people vote and may impact the outcome of an election or pending legislation.”
The rabbi said that because of that rejection, he became discouraged from attempting to place other ads on the social media site.

“The Iron Dome is literally saving lives and it was rejected.”

Facebook did not respond to requests for comments by the Pittsburgh Jewish Chronicle. PJC