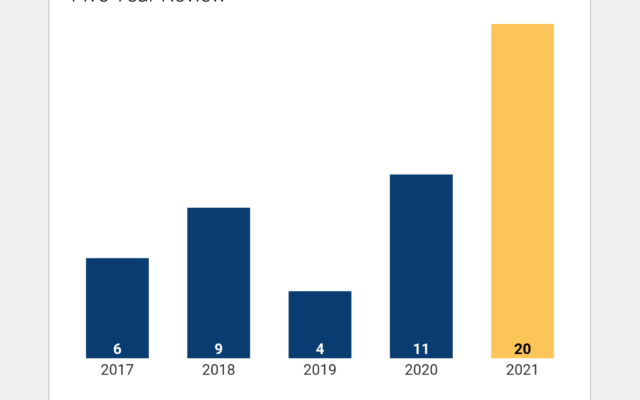 Number of antisemitic incidents reported by the ADL. Graph provided by the Anti-Defamation League.

In 2021, Western Pennsylvania experienced a high mark for antisemitic incidents.

According to a report released by the Anti-Defamation League, last year the region experienced the most antisemitic incidents since the organization began tracking them in 1979.

There were 20 incidents reported in three categories: harassment, vandalism and assault. That is an 82% increase from 2021, when 11 incidents were reported.

In a separate audit, the ADL found antisemitic incidents reached an all-time high in the United States in 2021, with 2,717 incidents. That represents an average of seven incidents reported per day, a 34% increase year over year; it is the largest incident total since the ADL began tracking.

“There’s no indication that it’s slowing down,” he said.

The numbers represent a more than 200% increase from just five years ago when the region reported single-digit incidents, Pasch said, calling the rise “dramatic.”

Although Pasch said he can’t pinpoint any single ideology that is responsible for the upsurge, he noted that Jews are experiencing more antisemitic incidents throughout the U.S. than they have in the last 40 years.

He also said that antisemitism is a canary in the coal mine for hate and that he expects to see a similar swell in reported incidents of hate against all minority communities, including Black, LGBTQ, Asian American, Pacific Islander and Muslim Americans.

“This is a real warning sign to everyone that our societal norms are clearly frayed,” he said.

While the pandemic inspired new antisemitic ideas and tactics, such as Zoombombing, Pasch said 2021 saw a rise in the use of older tactics as well.

Fifteen harassment incidents were reported in Western Pennsylvania in 2021, a 114% increase from the previous year. The ADL defines harassment as cases in which one or more Jews reported feeling targeted or threatened by antisemitic language or acts.

There were three antisemitic vandalism incidents last year in the region, a number consistent with the previous year’s reporting. Vandalism is defined by the ADL as incidents in which property is damaged in a manner meant to be harmful or intimidating.

Two assaults were reported in 2021, the same number reported in 2020. Assault is defined as cases in which individuals are physically targeted with violence accompanied by evidence of antisemitic animus.

Pasch said the numbers are alarming because each incident was against an individual. And the cases reported represent just one piece of the puzzle because many antisemitic incidents go unreported, he added.

“In our latest survey, American Jews are more concerned about antisemitism in the United States than before,” he said. “Sixty percent had themselves either witnessed behavior or comments that they personally deemed to be antisemitic.”

Community leaders have the responsibility to call out antisemitism, Pasch said. Policymakers, he added, should work to increase funding to fight hate crimes, and parents must advocate to their school boards and superintendents to expand funding for diversity, equality inclusion, antibullying and Holocaust education.

“All of us have a role to play,” he said. “Even if it’s just confronting it in our everyday work life and personal life. Maybe that comment you used to let fly by, we don’t let slide by anymore. We cut off that pyramid of hate.”

Shawn Brokos, director of community security for the Jewish Federation of Greater Pittsburgh, called the report an “ongoing wake-up call to the fact that antisemitism is very much in our region and continuing to grow.”

She lauded Pittsburgh’s Jewish community for its increased reporting and internalizing the “See something, say something” motto.

But Brokos cautioned that the increase in reported incidents isn’t solely because of a more cautious community.

“We’ve seen antisemitic conspiracy theories propagated due to COVID-19, the Israeli/Hamas war, the war in the Ukraine,” she said.

“We had two violent incidents, and there’s no good explanation for it,” she said.

While, the ADL’s report only included harassment, vandalism and assault against an individual, Brokos and Federation track all regional antisemitic incidents.