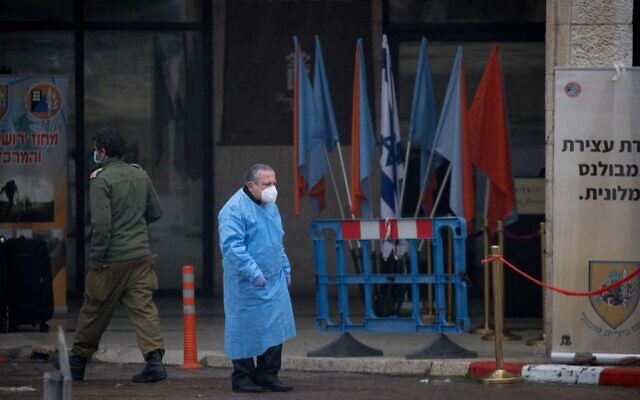 Israeli workers outside the Dan Hotel in Jerusalem that was converted to receive coronavirus patients, on March 20, 2020. (JTA/Yonatan Sindel/Flash90)

As coronavirus patients recover from the illness, doctors and patients are discovering that COVID-19 is leaving the “recovered” with long-term debilitating physical, cognitive and psychiatric damage, sometimes even in people who only suffered mild symptoms.

Patients are suffering from phantom pains, memory loss, personality changes, psychological issues and extreme fatigue, along with lungs that won’t heal, even months after being discharged from hospital, according to an investigation by Israel’s Channel 12 TV.

Israel has recorded just over 20,000 COVID-19 cases, with some 300 fatalities. More than 15,500 patients confirmed with the disease have subsequently recovered, but the TV report highlighted numerous cases of patients no longer testing positive for the disease who are suffering a range of major ailments attributed to the virus.

Afik Suissa, 24, was one of Israel’s youngest patients to be hospitalized and ventilated in serious condition. A resident of the southern port city of Ashdod, Suissa was hospitalized at the end of March. He had recently been in the US with two friends, touring in Miami and then Las Vegas.

The three returned to the country and Suissa immediately went into home quarantine in accordance with Health Ministry guidelines. But he quickly developed a fever that became worse and was hospitalized. Within days his condition had deteriorated so much he was put on a ventilator, which required sedation and the insertion of a breathing tube.

He eventually recovered and was discharged from the hospital last month. But he has since developed several issues, including phantom pains in one leg that require him to have physical therapy.

“The nerve in my foot is sending messages of pain to the brain,” he said in the TV report Friday night. “It causes me to limp because I feel that there is a wound there,” he said, even though there is no discernible injury. He also has an altered sense of taste.

The 24-year-old, who was a healthy basketball player, also now has high blood pressure and pulse rate, and is on blood thinners that he might have to take his whole life.

He also feels that he has had a change in personality. “I have less patience with people,” he said, adding that he now frequently gets upset and finds himself angry over trivial things. “I raise my voice over things that are not legitimate, nonsense.”

Maizie Avihayil, 63, was one of first people in Israel to be to be diagnosed with the virus. She was released from the hospital more than two months ago but now suffers speech problems that resemble the effects of a mild stroke.

“I can’t get certain words out. I will try to say something, I know what word I want to say, but I can’t,” she said, adding that her memory is also now “awful.”

Dr. Itzik Levy, an expert in infectious diseases at the Sheba Medical Center in Tel Aviv, said he believes these problems are caused by the effects of the virus on the brain.

“We know that corona causes disruptions in the blood vessels and in clotting, and so it can cause brain trauma, even mild forms, that you won’t even see on a scan, that won’t show up as a stroke or something,” he told Channel 12. “But it can be manifested as cognitive disruptions, or in some cases as changes in personality.”

“We don’t really know if it is reversible or not, or how long will it last,” he added.

People also suffer traumatic effects from being on a ventilator and being so ill, added Dr. Zvi Fishel, Chairman of the Israeli Psychiatric Association.

“We are seeing it cause psychological problems,” he said, citing recovered patients’ feelings of alienation and disassociation, with people sometimes unaware of how they came to be in a place.

Other common effects being discovered are severe fatigue and memory loss, even in those who had very mild symptoms.

“My work capacity has gone down. Once I could work for six hours at the clinic and then go to another clinic. Now I can only work for three hours before I need a rest,” said Dr. Lydia Blecher, a doctor who became sick herself and then later treated patients at a hotel where she was quarantined with other patients.

“It’s mostly weakness, sore muscles, and a problem with concentration, a problem with short term memory and a fatigue that is not physical,” she said.

Another former COVID-19 patient, Rona Ohayon, 32, who is now suffering from fatigue and weakness, has to take her mother with her to doctor’s appointments, so she remembers what to say and what she is told. “I’m so focused on the pain, I don’t remember things,” she told Channel 12, adding that it came as some relief to know that the ongoing effects were not unique to her.

The long term effects of COVID-19 are not just cognitive and mental, the TV report highlighted, but also include debilitating physical damage.

A bus driver from East Jerusalem who was hospitalized on March 5, and became the first Israeli attached to a respirator after he contracted the coronavirus, still can’t walk more than two minutes at a time. He was released from the Baruch Padeh Medical Center in Tiberias on March 30 and deemed to have made a full recovery.

The man, who has been identified only as Johnny, 38, was hospitalized after he chauffeured a group of 23 Greek tourists, who were later confirmed to be infected. At least one of the tourists subsequently died from the virus.

More than two-and-a-half months after Johnny was discharged from the hospital, his health is deeply affected. “He can’t work, he can’t walk. He walks two minutes and he gets tired,” his father told Channel 12. “I don’t know how long he will be like this.”

“We are used to seeing pneumonia patients recovering at a certain rate, from day to day they get better,” said Dr. Amir Onn, head of the Pulmonology Department at Sheba Medical Center. “Here we are seeing people at a status quo: They are stuck in a situation where they can’t do what they could previously.”

Noting that reports from China showed that some patients ultimately need lung transplants, Onn added, “We are talking about a disease that we have no idea how it behaves.” PJC