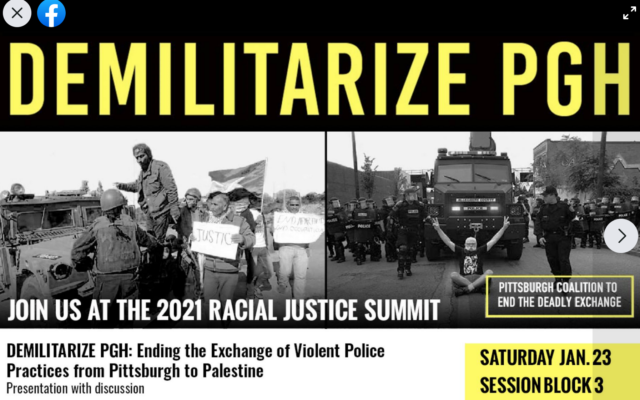 For at least the fifth consecutive year, a session disparaging Israel was featured at the Pittsburgh Racial Justice Summit.

The summit was held virtually this year, on Friday, Jan. 22, and Saturday, Jan. 23. In previous years, it was held at the Presbyterian-run Pittsburgh Theological Seminary in East Liberty.

Among the sessions at this year’s summit was a lecture titled “Demilitarize PGH: Ending the Exchange of Violent Practices from Pittsburgh to Palestine.”

The lecture was described in promotional materials as “a teach-in about police militarization and the training exchanges between U.S. police departments and the Israeli military. The Pittsburgh Coalition to End the Deadly Exchange will share research on these exchanges of ‘worst practices’ including mass surveillance, brutal suppression of dissent and racial profiling. Coalition members will explain the extent of local, regional and national law enforcement participation in Israeli-run training exchanges, parallels in police brutality, and the campaign to end these exchanges.”

Speakers were scheduled to “share examples of how the U.S.-Israel relationship reinforces racist surveillance and policing, which permeates different facets of civic life in both countries like criminal justice and education.”

Other members of the Pittsburgh Coalition to End the Deadly Exchange include IfNotNow Pittsburgh, which promotes placing conditions on military funding to Israel; the Pittsburgh chapter of the national organization CAIR, which has “a long record of anti-Israel activity,” according to the Anti-Defamation League; Friends of Sabeel North America, which appeared on an ADL list of the 10 most active anti-Israel groups in the U.S.; and the Democratic Socialists of America, which supports the BDS movement.

On its Facebook page, the Pittsburgh Coalition to End the Deadly Exchange claims that police in Allegheny County are being trained by Israel in “worst practices,” including “shoot-to-kill policies,” racial profiling and “massive spying and surveillance.”

The Racial Justice Summit has included anti-Israel voices since 2017. At the 2019 summit, during a panel presentation dubbed “Rewriting the Narrative: Reimagining the Future,” Susan Abulhawa, a Palestinian-American novelist, explained the launch of Zionism as “a political movement that was conceived by wealthy Jewish businessmen in Eastern Europe” and shouted down Jewish people in the audience attempting to refute her allegations. PJC