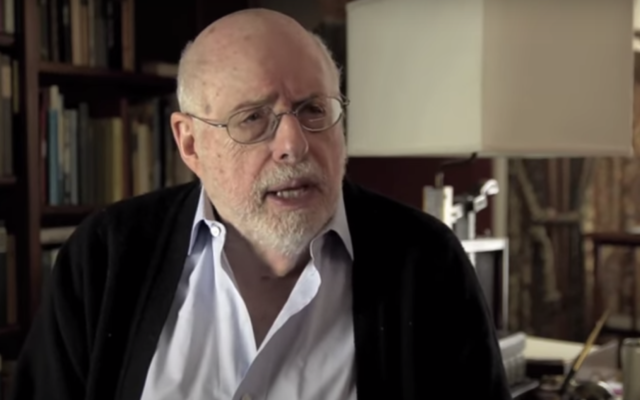 Rabbi Robert Marx in video for the 50th anniversary of the Jewish Council on Urban Affairs on June 16, 2014. (Screen shot: JCUA Chicago/ Youtube)

He died on March 28 at the beginning of the Passover holiday, surrounded by family at his home in Saugatuck, Michigan, the Chicago Tribune reported. He had suffered a heart attack weeks prior, the Chicago Sun-Times noted.

Marx’s legacy lives on through the Jewish Council on Urban Affairs, a community organizing group devoted to social justice causes in Chicago that he founded in 1964, and the Hakafa congregation on the city’s North Shore that he founded in 1983, which grew from a few families to hundreds of members.

The Cleveland native, ordained at the Reform flagship Hebrew Union College in Cincinnati, was moved to make Holocaust comparisons after witnessing white Chicagoans pelt civil rights marchers with rocks and bottles in the summer of 1966. During the march, Marx reportedly sat guard in front of a pile of rocks so that the racist protesters could not use them.

“What I saw in Gage Park seared my soul,” Marx wrote in a letter to the Union of American Hebrew Congregations, which is now the Union for Reform Judaism. “I was afraid and I am afraid now. I saw how the concentration camp could have occurred, and how men’s hatred could lead them to kill.”

Quotes from that letter are inscribed on a memorial in Chicago’s Marquette Park to King and the infamous march, which King called the most hostile he had ever seen at the time. Marx marched with King in a follow-up in August of 1966, as he had in the famed Selma march of 1965.

Marx, whose Jewish Council fought racist housing policies and policing tactics, became one of the country’s leading Reform activists. He saw the causes of anti-Semitism and anti-Black racism as intertwined, and became a staunch ally of Chicago’s Black communal leaders — including Rev. Jesse Jackson, whose ties to the Jewish community were strained at best after calling Jews “hymies” in the 1980s and later standing up for controversial Palestinian leader Yasser Arafat. Marx said he felt “used” when Jackson met with Arafat.

“He was the Jewish voice for justice, working closely with the Black community and Black churches,” Jackson said about Marx in a statement, according to the Tribune. “We prayed together, sang together, and marched together. When Nazis marched in Skokie, we fought hate together. We have always been together. I love him so much. I miss him already.”

Marx was involved in other interfaith work as well.

“Part of his devotion to his faith and his love for his community was in ensuring that that community lived up to its highest ideals of justice and equality,” said Rami Nashashibi, head of the Inner-City Muslim Action Network.

Marx ran Congregation Solel in Highland Park from 1973 to 1983, after losing his 15-year-old son to a longstanding illness. He co-wrote a book called “Facing the Ultimate Loss,” for fellow grieving parents.

He is survived by the other child from his first marriage; his second wife Ruth; five stepchildren; and a total of 17 grandchildren. PJC