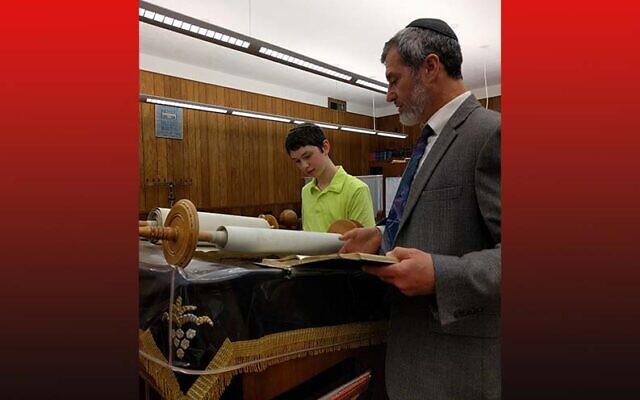 Rabbi Wasserman reviewing the portion with my Gabe Small. Photo by Stephanie Small.

Rabbi Moishe Mayir Vogel was unequivocal when speaking about the legacy of Rabbi Daniel Wasserman.

“He was the ultimate rabbi. He didn’t hesitate to roll up his sleeves in any area,” said Vogel, secretary of the Vaad Haarbonim of Pittsburgh, an umbrella group of Orthodox rabbis in the region. “He is an individual that knows no bounds.”

Wasserman, Shaare Torah’s senior rabbi for more than a quarter of a century, stepped down from his position on June 30 to move to Israel. He leaves a community saddened by his departure but better than when he arrived, according to many.

A revitalizing force
Wasserman was hired by Shaare Torah in 1995 after serving congregations in New Jersey and Massachusetts. At the time, the Orthodox shul was facing serious challenges, according to Jonathan Young, the president of its board of directors.

“There were not a lot of members,” Young said. “He really brought energy to the job. The man had more energy than anyone you’d ever want to meet. It was remarkable.”

Throughout Wasserman’s tenure, Young said, the congregation emerged from its financial and membership crises and became a stable organization.

“He built the congregation, our congregation,” Young said. “We have about 115 members; we’ve been pretty stable financially. We always have money to pay our bills, which is no easy feat in 2022.”

Alex Sax chaired the search committee responsible for hiring Wasserman. He said the young rabbi offered Shaare Torah exactly what it required at the time.

“The synagogue needed some growth and energy,” Sax said. “Rabbi Wasserman was definitely the man to take that challenge on. We went through a period of growth, and it was all due to him.”

Wasserman, Sax added, had the right combination of traits to lead the congregation.

“He was a Torah scholar and an easy person to talk to,” Sax said. “He took care of the synagogue in the spiritual and physical sense and was able to deliver a scholarly Talmudic lesson and still deal with the mundane issues of the street. He was cross-sectional.”

“He was a young guy who was interested in our kids,” she said. “They started kids’ groups so the parents could go to shul and the kids could play. It revitalized the synagogue in that way. Here was this young, dynamic guy who liked your kids and had a lovely wife. It was really special.”

Shaare Torah member Stephanie Small credits Wasserman with her decision to stay in Pittsburgh and raise her family here, saying he transformed the synagogue into a vibrant institution.

“Had he not done that, we very likely would not have remained,” Small said, adding that Wasserman and his wife Judi were “major movers in the trajectory of our lives.”

‘A second home’
Small said the Wasserman family opened the doors to their home and warmly welcomed others.

“My son’s first time sleeping in a sukkah was at the Wassermans,” she said. “When I went into labor with my youngest, who is now 10, the plan was always that if my parents weren’t here yet, the Wassermans would take the kids because that’s where they were most comfortable. It’s always been their second home.”

Lisa Young, the wife of Jonathan Young, said it wasn’t uncommon for families to call the Wassermans when they needed a babysitter before going to the hospital to deliver a new baby. And the couple went beyond embracing those late-night calls.

“Rabbi and Judi would fight with each other when they got the call in the middle of the night over who got to go and be in the house when the other children woke up in the morning to tell them mommy and daddy were at the hospital,” she remembered.

The relationship Wasserman developed with the congregation’s children continued into adulthood for many. Kraut said that if her children, now grown, have halachic questions they still call Wasserman.

“They reach out to him. They are in different walks of life, they have rabbis in their lives, too, but they still turn back to him to ask a question.”

Chesed and Love
David Chudnow and his wife have been members of Shaare Torah for eight years. He said the rabbi’s legacy will be that “he tried to tell people that there is never a moment in life when you can’t help someone else.”

An example of this creed could be found in Wasserman’s shopping habits, Chudow said. “If you go into Giant Eagle, your main goal [according to Wasserman] should be ‘How can I help people around me. Can I put a cart back? Can I help someone reach something on a high shelf?’ He said something once that has stuck with me and changed my actions forever: When someone asks you for money, don’t turn them away. If you’re uncomfortable, go buy a gift card and offer them a $5 card. That way, if you have issues with trust, you don’t have to worry about your own biases and can still find a way to do chesed.”

Community first
Wasserman also worked to ensure that Squirrel Hill was a welcoming place for Jews. Sax said it was because of the rabbi that when Dunkin Donuts opened in the neighborhood, it was kosher.

“He decided on his own to go in and make sure it was certified kosher, making it accessible to the entire gamut of the religious community,” Sax said. “He took on kashrut questions when new businesses came in to validate products so that all members of the community could eat comfortably.”

Kraut said it was because of Wasserman that Costco in nearby Homestead has a large variety of kosher options available.

“I know big cities that don’t have the kind of choices that we have in the Costco bakery, the Giant Eagle bakery,” she said.
Wasserman is a “man of principle,” Kraut added. “He’ll stand up and fight for what he really thinks matters.”

Chevra Kadisha
Wasserman did just that when he challenged the state’s Board of Funeral Directors, Bureau of Enforcement and Investigation of the Department of State and Board of Professional and Occupational Affairs, eventually signing a Memorandum of Understanding that allowed rabbis and other religious leaders to offer funeral services without the requirement of being a licensed funeral director.

Wasserman also was very involved with the Chevra Kadisha, the group that cares for Jewish deceased. He even taught classes on building coffins.

“One of his major legacies,” Kraut said, “is bringing the ability to care for our dead. It’s one of the things he fought for so deeply because it means so much.”

Family business
And while it’s easy to see the rabbi as a one-man force of nature, congregation members are quick to note that Wasserman and his wife are a dynamic duo.

Small said that Judi Wasserman often worked behind the scenes, but she was always present.

“Judi exudes warmth and love and goodness,” Small said. “When you meet her, you just want to hug her.”

Young women who took classes from the rebbetzin were inspired by her, with many saying they could tell she not only talked the talk, but walked the walk.

Small, director of Clinical Services at JFCS, said Judi Wasserman went back to school to get her master’s degree in speech language pathology and worked at the Jewish Association on Aging for 15 years.

“Judi does fabulous work with every population she works with because she sees the neshama (soul) in them,” Small said.
Lisa Young and her husband became friends with the Wassermans and often shared holiday meals.

“Judi is the most impressive, strongest, warmest person I know,” Lisa Young said. “She has this extremely humble, unassuming way of offering love and support. The Wasserman family always understood that being a congregational rabbi was a family business.”

Full circle
Alex Sax not only served as the chair of the search committee responsible for hiring Wasserman, but the first bat mitzvah the rabbi officiated at Shaare Torah was for Sax’s daughter, Shayna. Last weekend, coming full circle, the rabbi presided at his last official bar mitzvah at the synagogue — for Shayna’s son, Coby.

“It’s interesting how that’s worked out,” Sax said. “On a personal level, he’s been involved in so many life experiences — marriage, birth, unfortunately, my parents’ death. His engagement with my family has been extremely positive — beyond what I could put into words.”