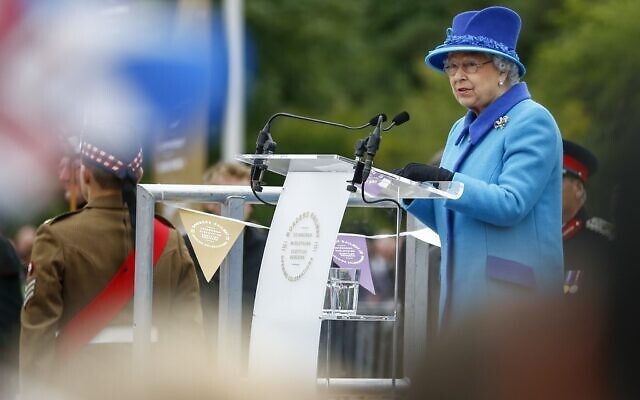 Opening the Borders Railway on the day Queen Elizabeth II became the longest reigning British monarch, 2015. In her speech, she said she had never aspired to achieve that milestone. (Photo courtesy of the Scottish Government, creativecommons.org/licenses/by/2.0>, via Wikimedia Commons)

Queen Elizabeth II, who sat on the throne for 70 years until her death on Thursday, enjoyed a long and warm relationship with the British Jewish community, from her ascension to the throne in 1952 through her final years.

In May 1952, just several months after the death of her father, King George VI, the queen met with the British chief rabbi and leaders of the British Jewish community. A month later, Jewish officials – as well as the Israeli ambassador – were present at her official coronation at Westminster Abbey.

Marking her platinum jubilee in June, Marie van der Zyl, the president of the Board of Deputies of British Jews umbrella group, wrote that Queen Elizabeth has “been a rock for the nation” and has cultivated “a long history of involvement with the Jewish community.”

On the same occasion, British Chief Rabbi Ephraim Mirvis praised the queen’s “70 glorious years of leadership” and lauded “her humility, her sense of duty, the service that she gives to the nation [and] her selflessness.”

Throughout her decades as the UK’s head of state, Queen Elizabeth cultivated amicable ties with Jewish communal figures as well as cordial relations with Israeli leaders. But though she paid official visits to dozens of countries throughout her tenure, she never visited the State of Israel.

In fact, no member of the royal family ever visited Israel in an official capacity until 2018, when Prince William arrived in the Jewish state, lifting the unofficial boycott.

Prince Philip made a personal visit to Israel in 1994 to honor his mother, Princess Alice of Greece, who is buried on the Mount of Olives in Jerusalem. A year later, Prince Charles visited Israel in 1995 and 2016 to attend the funerals of Yitzhak Rabin and Shimon Peres. The two princely stays were not, however, official royal visits.

The decades-long refusal of the royal family to undertake an official visit to the State of Israel – while having no such hesitations over trips to authoritarian monarchies such as Saudi Arabia and Qatar – irked many Israeli politicians and members of the British Jewish community.

Jonathan Arkush, the former head of the Board of Deputies, told The Times of Israel in 2016 that local Jewry had been pushing hard for an official royal visit to Israel since it was “not about time. It’s past time for a royal visit.”

An anonymous British government official told The Telegraph in 2015 that “until there is a settlement between Israel and the Palestinian Authority, the royal family can’t really go there.” Though many British leaders, including prime ministers, have paid visits to the Jewish state, the official claimed that “in Israel so much politics is caught up in the land itself that it’s best to avoid those complications altogether by not going there.”

Despite the snub, the queen still enjoyed close ties to and loyalty from British Jews, and also met with many visiting Israeli dignitaries during her decades on the throne.

When she turned 90 in 2016, former UK chief Rabbi Jonathan Sacks lionized the queen as someone “whose greatness speaks across ethnic and religious divides… her contribution to British society is immeasurable and the respect she has shown for all religions has enriched our lives.”

Indeed, British Jews have largely expressed fealty and gratitude to the queen, expressing any displeasure or criticism behind closed doors. In 1972, British Jews vowed to plant one million trees in Israel to honor the queen’s 25th wedding anniversary to Prince Philip.

During the decades in which members of the royal family refused to travel to Israel, the queen hosted many Israeli leaders in the UK, including then-president Ephraim Katzir in 1976. In 2008, then-president Shimon Peres was knighted by Queen Elizabeth upon the invitation of the British government.

The second-ever Israeli envoy to the UK, Eliahu Eilat, was granted a rare sit-down dinner and overnight visit with the queen at Windsor Castle in 1959.

In 2000, the queen inaugurated Britain’s first permanent memorial to the Holocaust, although a year later she skipped attending the nation’s first-ever official Holocaust Memorial Day due to scheduling restraints, sending Prince Charles instead. She served as the patron of the UK Holocaust Memorial Day Trust from its establishment in 2005 until she passed it on to Prince Charles in 2015.

While the royal family was shaken after a British tabloid released video footage of a 7-year-old Elizabeth giving a Nazi salute in 1933 or 1934, British Jewry largely defended the monarch.

“I don’t think any criticism of a 7-year-old child would be remotely appropriate and I don’t intend to make any,” Arkush said when the footage was revealed in 2015. “I do not think for one moment that it would be appropriate for me to suggest that the full horror of Nazi Germany was known at that point.”

In 1996, during a visit to Poland, Queen Elizabeth was criticized for not scheduling a stop at the Auschwitz concentration camp. In a last-minute addition to her itinerary, she instead visited and laid a wreath at a Jewish memorial at Umschlagplatz in Warsaw, where Jews were rounded up and transported to the Treblinka extermination camp.

It was not until almost two decades later that she did visit a Nazi concentration camp. On her last official foreign trip before her death, Queen Elizabeth traveled to Germany in 2015, visiting Berlin, Frankfurt and Celle. While it was her fifth state trip to Germany, the queen made her first-ever visit to a concentration camp, stopping to lay a wreath at Bergen-Belsen and meet with Holocaust survivors at the site.

After listening to their stories she responded: “It must have been horrific.” PJC