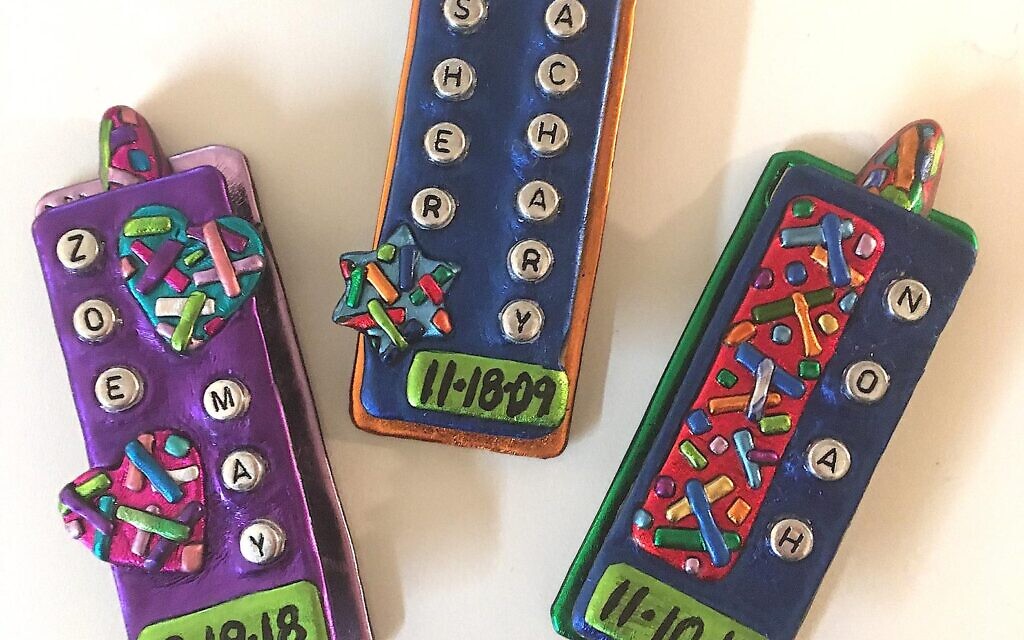 Cathy Frank jokes that she made Christmas ornaments to pay for her kids’ Jewish day school education.

It’s not just Christmas ornaments, though — the artist creates and sells all manner of brightly colored, shiny tchotchkes and treasures, from personalized mezuzahs (yes, there’s a Steelers one) to poinsettia Christmas pins on Etsy and in stores. 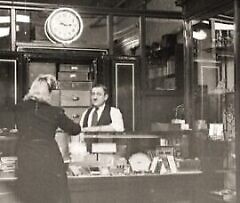 Cathy Frank’s grandfather, Israel, at I. Binstock Jewelers (Photo by Meyer Fogel)
But she didn’t start out that way. Frank, 62, grew up surrounded by jewelry and engravings at her grandparents’ Squirrel Hill store, I. Binstock Jewelers. As a child, she had a knack for the creative stuff, like making little outfits out of tissues and beads for troll dolls, and, in high school, jewelry.

Frank pursued her bachelor’s degree in art education with a concentration in gold and silver smithing at SUNY New Paltz while teaching jewelry and enameling at summer camps including Emma Kaufmann Camp.

When she graduated in 1981, she ended up working for several years in dentistry — which wasn’t such a far cry from the work she had imagined herself doing. Frank was a perceptive dental assistant with an eye for hue, and the dentist, she said, would never choose a tooth color without consulting her first. 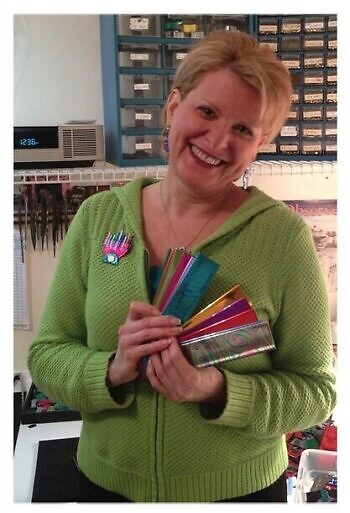 Cathy Frank in her studio with Friendly Plastic sticks, sporting her own designs (Photo by Steve Frank)
But in the little alcove she made for herself at home, she continued her art, using an enamel kiln to create jewelry. After she became pregnant with her son, Jason, she left dentistry.

“It could have very easily been that I would’ve been looking at bicuspids and molars the rest of my life,” said Frank, but she wanted to do something more creative.

So, she went from carving crowns and bridges to carving plexiglass and selling her works at art centers. In the 1990s, she started making word ornaments and holiday jewelry out of Amaco’s Friendly Plastic sticks — a material developed in the 1980s with a low melt temperature and metallic foil overlay. They were a hit.

For decades, she has played around with the material, making ornaments and mezuzahs and wall hangings, pulling all-nighters, sometimes, to make her creations happen. 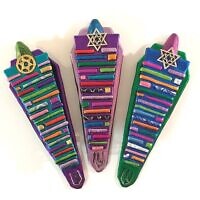 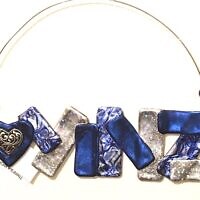 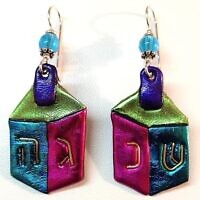 Mezuzahs are a particular challenge, but thanks to eminent Jewish artist Gary Rosenthal, Frank now has it down. The two met at a craft business institute in the late ’90s, and Rosenthal helped Frank get the glass tubes for the mezuzahs.

She fuses each mezuzah in her toaster oven, then puts the scroll inside (the mezuzahs come with a non-kosher scroll, but customers can order a kosher one from her on Etsy at an additional cost).

People love the bright colors, she said, and the ability to personalize the products. Bar and bat mitzvah kids can request their names and favorite activities, new parents can order mezuzahs with their baby’s name and birthdate for the nursery and sports fans can pick a mezuzah with their favorite team. 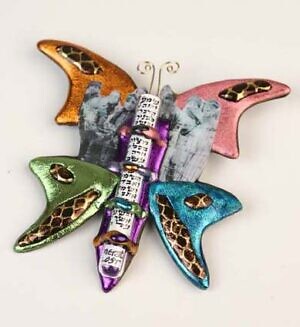 The generation lost butterfly mezuzah (Photo by Cathy Frank)
A decade ago, Amaco challenged artists to design a butterfly out of Friendly Plastic sticks for the Houston Holocaust Museum’s “The Butterfly Project: Remembering the Children of the Holocaust.” Frank made hers into a mezuzah. She cut out a black and white photo of children during the Holocaust standing behind a fence, glazed it and affixed it to her butterfly, so it would look like the wings of the butterfly were lifting the children up. She called her winning entry “Generation Lost.”

When, in 2015, Amaco announced it was discontinuing Friendly Plastic sticks, Frank bought 100 pounds of the remaining material. But she also wanted to make her own sticks. She played around with the more widely available Friendly Plastic pellets, turning them into flat pizza shapes. Artists loved them so much that Frank later partnered with a manufacturer to meet the demand.

She is now a distributor of the environmentally friendly material, which she renamed “custom metallic acrylic” because she thought “friendly plastic” sounded tacky, she said. Frank sells the material on Etsy, along with her own creations.

“It gives me no greater joy than to be able to give this material to the artists so that they can continue making [art],” said Frank.

And she gets joy from creating memorable gifts, too, hence her Etsy shop’s name: CF Joyous Designs.

“I am often struck by how much I feel like I am celebrating with my customers as I make their pieces,” she wrote in an email to the Chronicle. “It’s personal and very rewarding.” PJC