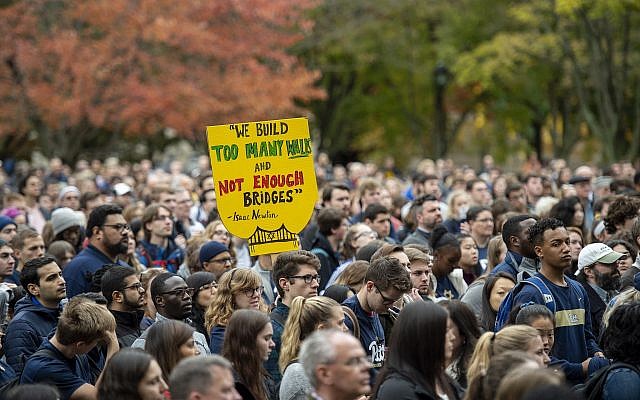 Two years after the massacre at the Tree of Life building, the University of Pittsburgh and Carnegie Mellon University have together launched a research center to study and combat extremist hate.

The Collaboratory Against Hate – Research and Action Center will bring together researchers and clinicians from both universities, as well as local community groups, to study how extremist hate is spawned and proliferates in online spaces and real-life encounters. The center’s goal is to develop interventions to inhibit extremist hate and minimize its impact.

Sociologist Kathleen Blee, dean of Pitt’s Dietrich School of Arts and Sciences, will be leading the Collaboratory along with Lorrie Cranor, director and professor in security and privacy technologies in CMU’s CyLab. While Blee recognizes the enormity of the task ahead, she is optimistic.

“There will definitely be challenges, but all I see right now is opportunities,” she said. “A definite challenge is the scale of the problem we’re addressing — it’s very large — but so are the ambitions of the Collaboratory.”

Blee, a member of Congregation Dor Hadash — one of the three congregations attacked on Oct. 27, 2018 — has spent decades studying white supremacism, interviewing members of hate groups to determine how they came to embrace their ideologies.

While Blee says her work has been “small-scale,” she hopes that by bringing in other researchers and experts, the Collaboratory can develop effective interventions.

“In Pittsburgh, we know all too tragically the facts of extremist hate,” Blee said. “We have a community of people who were touched very deeply by this and are committed to making sure we can intervene in this problem.”
In addition to assembling a team of researchers, the Collaboratory will also partner with various community stakeholders.

“We have people who know about technology, people who know about communications, people versed in extremism, in the science of addiction, in child psychology, and so much more,” Blee said. “We have in this community people who have worked on a number of issues surrounding hatred, and the Collaboratory is meant to bring together these people and give them a forum to create multidisciplinary teams to make headway in this area.”

Several local Jewish organizations have already inquired about partnerships with the Collaboratory, including Tree of Life Congregation.

“We look forward to learning more from their forthcoming research projects and exploring opportunities to partner as we prepare to welcome a new beginning at Tree of Life,” the congregation’s leadership said in a prepared statement.

The idea for the Collaboratory first arose when former Pitt Chancellor Mark Nordenberg and former CMU President Jared Cohon served on a committee created by the Jewish Federation of Greater Pittsburgh to advise on the distribution of donations after the Pittsburgh synagogue shooting. The university leaders were inspired then to join together Pitt and CMU in the fight against hate-motivated violence.

The concept of a research center occurred to Nordenberg after a trip to New York, where he spoke with a content designer of memorials and museums who “indicated that sometimes the most meaningful memorials are not brick-and-mortar,” Nordenberg told the Chronicle.

After approaching their respective successors, Pitt Chancellor Patrick Gallagher and CMU President Farnam Jahanian, Nordenberg and Cohon got the green light to create a research center.

Nordenberg said he is confident in the alliance of the two schools, which have collaborated on other projects, including the Pittsburgh Supercomputing Center and the Center for the Neural Basis of Cognition.

“There are no two research universities in the world that have done a more effective job of partnering to advance the greater good,” Nordenberg said. “We have a great track record.”

Cohon echoed those sentiments, and stressed the increasing need for the Collaboratory in the current climate.
“It seems that every week brings another outrage,” Cohon said. “It’s become an epidemic in itself. We think that by joining the strengths of the two universities, we can make a contribution to stem this violence.”

Dan Leger, a member of Dor Hadash who was seriously wounded during the Oct. 27, 2018, shooting, called Nordenberg the day the universities announced the launch of the Collaboratory to convey his support.

“The idea that there’s a concerted collaborative effort that will objectively look at why things like this happen, that can conceivably stop people from acting on things inside themselves that make them violent, is amazingly encouraging,” said Leger, a nurse. “I think it’s really necessary and I’m excited it’s happening here in Pittsburgh with two universities that have such talent, skill, knowledge and ability.”

Leger has reached out to government officials about stemming the flow of hate, but found them to be ineffective and indifferent, he said.

“It was frustrating to see how reluctant they are to do anything,” he said. “It’s so distressing to see the rise of these kinds of acts of hate again as we begin to lift ourselves out of the imposed isolation of the pandemic. As we begin to come close to each other again, we have to face this hatred and I’m glad this project exists as we head into the next phase of our society.”

The Collaboratory offers the community a sense of comfort, said Jeff Finkelstein, president and CEO of the Jewish Federation of Greater Pittsburgh.

“We can see what’s happening in the world, in the hatred against the Asian American and Pacific Islander community, the Black community, other diverse communities, and, of course, in the continued hatred against the Jewish community,” Finkelstein said. “For us in Pittsburgh, the act of anti-Semitism that took place on Oct. 27 is still on our minds, and it gives us some sense of comfort that an initiative started here is trying to combat hate. It gives us some pride.”

Leger remains optimistic in the power of the Collaboratory Against Hate to break boundaries.

“I hope efforts like this collaboration will help move past that polarization and find some common ground, because it’s there,” he said. “We’re all human beings.” PJC