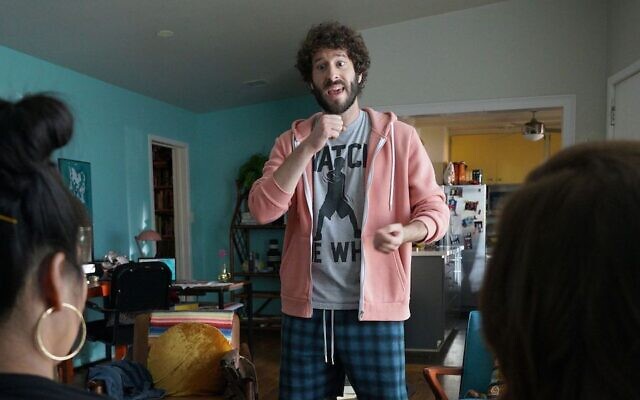 Dave Burd, aka the rapper Lil Dicky, in a scene from his FX show "Dave." Photo by Ray Mickshaw/FX via JTA.org

If you haven’t heard of the comic rapper Lil Dicky, and you are at least tangentially interested in rap or comedy, you should familiarize yourself with him.

Of course, you’ll need to be OK dealing with a good amount of blatant vulgarity. You read his name correctly — Lil Dicky, real name Dave Burd, has become an industry success story despite turning the norms of the rap world upside down with his stage name. Instead of touting an excess of raw masculinity, he makes fun of the diminutive size of his package.

The irony is that Burd, a white 32-year-old from suburban Philadelphia with a Jewfro, is actually quite good at rapping, something that he has incorporated into his brand (with varying levels of success, depending on what kind of rap fan you ask). His road to fame began with viral YouTube music videos, including “Ex-Boyfriend” in 2013, which now has 39 million views.

Burd’s rap delivery is more narrative than artistic, and his tracks often sound like they were constructed to accompany music videos and succeed on the internet. But his allure also stems from his direct self-

consciousness, and his willingness to mock himself, the rap world and the concept that a privileged white Jewish guy could achieve any success as a rapper.

“$ave Dat Money,” featuring the real stars Fetty Wap and Rich Homie Quan, is about just that — saving money instead of blowing through it. In “Professional Rapper,” from his 2015 debut album of the same name that made it to No. 7 on the Billboard chart, Lil Dicky embarks on a job interview of sorts with Snoop Dogg to become a real rapper (in which he mentions he started his career with the help of his bar mitzvah money).

Now Burd has something else that might be the best use of all of his talents yet: an FX sitcom.
The show, which premiered in March and is now available to stream on Hulu, is called “Dave.” It’s a fictionalized version of Burd’s rise to stardom, taking place in the uncertain phase after his initial viral YouTube fame, before his career really gets on track. Standouts of the cast include Andrew Santino, a comedian who plays Burd’s friend and manager, and Davionte “GaTa” Ganter, Burd’s real-life hype man who plays the same role on the show.

But in addition to being consistently funny, the show allows Burd to amplify his insecurities and anxieties and bring them to a new level. If Larry David or Woody Allen were also born in 1988, they might have made something similar.

There are plenty of tangible and funny Jewish moments throughout the show. A favorite of mine comes when Burd’s team — consisting of his manager, his hype man and his producer, who’s also his childhood friend, and black — visit his parents’ house in Cheltenham, near Philadelphia, before Lil Dicky’s first gig in the city the next day. At dinner, Burd’s parents bring out a notebook with a list of questions about the concert that read like a Jewish worry frequently asked questions page: what types of bills should they bring, and can they take photos of the performers with their cellphones?

In a broader sense, though, the entire show is infused with a Larry David-esque sense of anxiety and unease. Inside, Burd is never quite comfortable in the various worlds he navigates — a relationship, sex (for very graphic reasons), music writing, performing, interactions with black people, even success. His blowup at a meeting with record label executives over the level of creative freedom in his lucrative record label contract feels like it could fit in an episode of “Curb Your Enthusiasm.”

In episode 8, Burd meets the real-life super producer Benny Blanco, a similarly Jewfroed guy who wears a Star of David among other pieces of bling around his neck, at his swanky L.A. house. Blanco, born Benjamin Joseph Levin, describes his looks as Andre the Giant meets Danny DeVito, as his attractive girlfriend wanders downstairs to make out with him.

Burd watches in amazement, but Blanco explains his appeal: He has worked with some of the biggest artists in the world, from Justin Bieber to Rihanna to Kanye West.

Meanwhile, his girlfriend says that he and Burd “kind of look like brothers.”

Both guys respond at the same time: “It’s ’cause we’re both Jewish.”

It’s played for humor, but there’s another point hiding in the scene — maybe guys like Burd belong in the business after all. pjc