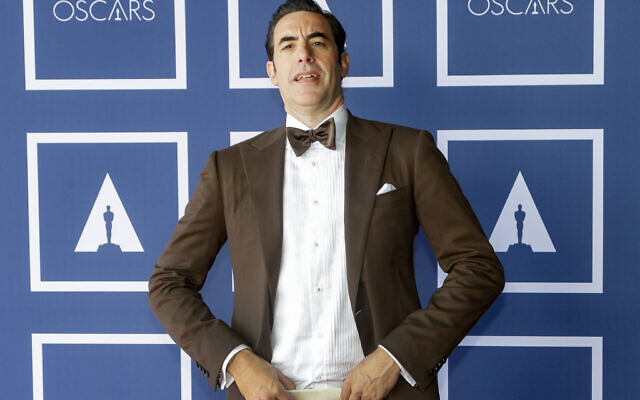 Sacha Baron Cohen attends a screening of the Oscars on Monday, April 26, 2021 in Sydney, Australia. (Photo by Rick Rycroft-Pool/Getty Images via JTA)

(JTA) — It was an unusual Academy Awards in several ways.

Forced to adapt to social distancing protocols, the ceremony was split into different venues but mostly took place in Los Angeles’ Union Station. For only the second time in history, a woman won best director — and the first woman of color at that, as the award went to Chloe Zhao for “Nomadland,” which also won best picture. And then there was Glenn Close’s meme-able dance to the self-explanatory 1988 song “Da Butt.”

To be fair, there was not a large pool of nominees to begin with. And “Nomadland,” a portrait of homeless nomads who move around the American West, did feature one Jewish producer who got his hands on the top prize — Peter Spears, a former actor best known before Sunday night as a producer of “Call Me By Your Name,” the hit 2017 drama based on Jewish writer André Aciman’s novel of the same name.

Here’s a roundup of the other results and moments we had our eyes on:

–Sacha Baron Cohen lost in the best adapted screenplay category — his “Borat” sequel was beat out by Florian Zeller’s “The Father,” an adaptation of his own play. Cohen was also nominated as best supporting actor for playing Jewish activist Abbie Hoffman but lost to Daniel Kaluuya, star of “Judas and the Black Messiah.”

-After winning best screenplay at the Golden Globes, Aaron Sorkin‘s “The Trial of the Chicago 7,” about the 1968 Chicago Seven protesters, was up for six Oscars. Sorkin was personally up for best original screenplay. But the film didn’t win any on Sunday night.

-For Jewish songwriter Diane Warren, 12th time was not the charm. Her tune “Io sì (Seen),” from the film “The Life Ahead” — which stars Sophia Loren as a Holocaust survivor — was nominated for best original song, the 12th time she had been nominated in that category. It lost to “Fight For You” from “Judas and the Black Messiah.”

-“Mank,” director David Fincher’s film about the legendary Jewish screenwriter Herman Mankiewicz, was up for a leading 10 awards, but only won two — best cinematography and best production design.

-In accepting an award for his humanitarian work, filmmaker Tyler Perry talked about combating hate and about his inspirational mother. In one story he recounted, he found her at home one day when she was supposed to be at work. He said she worked at a Jewish community center, and there had been a bomb threat at the building. “She couldn’t believe that someone wanted to blow up this place,” he said. PJC