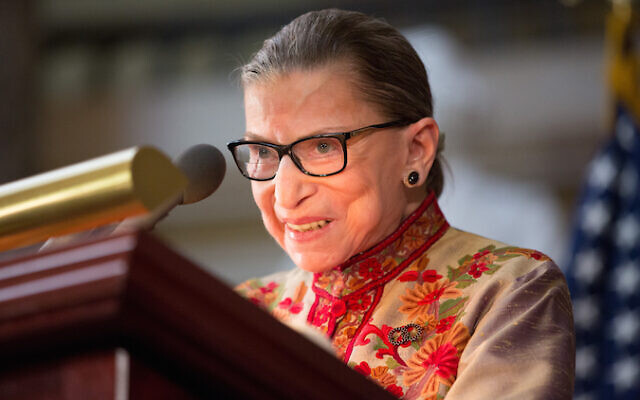 (JTA) – Shlomo Zuckier was walking out of his in-laws’ house Saturday morning to go to outdoor synagogue services when he saw the newspaper on the ground. Through the plastic bag, he could read the headline with the biggest story of the previous evening: Ruth Bader Ginsburg had died.

Most Jews would have heard the news on Friday evening, not long after the 87-year-old Supreme Court justice passed away of complications of metastatic pancreatic cancer. Many Reform and Conservative synagogues addressed the news in their Zoom services Friday night or Saturday morning.

But for Orthodox Jews the news arrived differently. Some, like Zuckier, a postdoctoral fellow in Jewish studies at McGill University, learned about it from the newspaper, the way one would have heard news of that sort in an earlier era. Others heard from fellow congregants or neighbors over the course of the holiday. And still others found out when they turned on their phones or checked the news online after the holiday ended Sunday evening, a full two days after the rest of the world.

While for some Orthodox Jews, particularly those with more progressive politics, the news of Ginsburg’s passing added to the emotions of Rosh Hashanah, for many it was just another important news story but with less emotional heft. That’s partially because of the way they found out, separated from the online news cycle and social media reactions, and partially because of the way they see their Judaism.

“The whole thing was surreal,” Zuckier said of seeing the news in the newspaper on Rosh Hashanah and later seeing the posts about Ginsburg’s death on social media after the holiday ended. “But for me it didn’t define my Rosh Hashanah. I had other things to focus on.”

Zuckier said some of that comes down to the way Orthodox Jews see politics and religion.

“It’s not a right-versus-left thing,” he said. “I think it’s just to what extent you see politics as central to your religion.”

While for Reform and Conservative Jews, the Judaism Ruth Bader Ginsburg embodied, with her focus on social justice over traditional practice or dogma, represents many of their dearest values. Even her appearance cut a familiar figure, reminiscent of many a Jewish grandmother.

But for many Orthodox Jews, for whom traditional practice is a more central focus, the type of Judaism she represented is less resonant. While for Reform and Conservative Jews, Democratic politics are often viewed as consistent with the Jewish value of social justice, for Orthodox Jews, who have trended increasingly rightward politically over the past several years, the relationship between politics and religion is more complicated. And for haredi Orthodox Jews, many of whom do not consume popular cultural offerings like movies and documentaries, Ruth Bader Ginsburg never became the cultural icon she did in the rest of the liberal Jewish world, a status she only assumed there in recent years.

“If a big rabbi had passed in the Orthodox world, that’s what we saw in the liberal Jewish world,” said Elad Nehorai, a politically progressive writer who has written extensively about politics in the Orthodox community.

And for many in the Orthodox community, Ginsburg’s politics were not the cause for celebration that they were for many Reform and Conservative Jews.

Still, for some Orthodox Jews, particularly Modern Orthodox ones, her death was a serious blow.

For Maharat Ruth Balinsky Friedman, a member of the clergy at Ohev Sholom – The National Synagogue in Washington, D.C., learning about the justice’s death right before Saturday morning services from a congregant left her feeling “deflated.” But she didn’t address it at services.

“Our services were abbreviated,” she said, noting that her synagogue, like many Orthodox services, had shortened the service to minimize the amount of time people would be gathering in-person. Part of abbreviating the service was cutting out the sermons.

But even if there had been a sermon, she said, addressing the news felt like the wrong fit during a High Holiday season that was already more emotional than a typical year. And with fewer people at services – and social distancing hampering the feasibility of side conversations in synagogue – many people would not have heard the news by the time services began.

“I think it would be too tricky to deal with in shul and I knew some people would be hearing it for the first time,” said Friedman.

For Nehorai, who lives in California, hearing the news before the holiday began on the West Coast left him feeling “gutted.” But after the holiday ended, he said, he was glad he had heard about it before beginning Rosh Hashanah.

“All Jews have had this horrible experience where we come out of a Shabbos or yontif [holiday] where we find out about something … Yom Kippur last year was when we found out about the shooting in Germany,” Nehorai said of the attempted shooting at a synagogue in Halle, Germany.

“I think we’re in this age when it’s very hard to process grief and trauma because so much of it is so online so we’re constantly reacting,” he said. “It was really helpful to have two days of none of that.” PJC